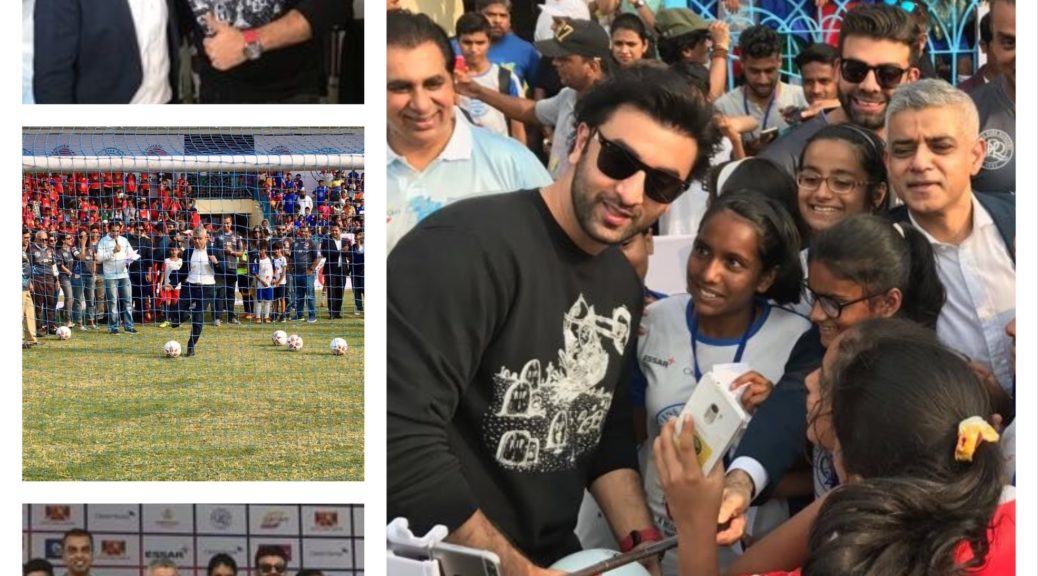 Four young players set to train with Queens Park Rangers and Sadiq Khan confirms that for the first time two girls, as well as two boys, will head to the Championship side

The Mayor of London, Sadiq Khan, announced the names of the successful youngsters on the first day of his trade mission to India. Khan was attending the ninth annual finals day of the Mumbai Soccer Challenge and watched a challenge match to win the inaugural Mayor of London Cup. He confirmed that, for the first time in the scheme’s nine-year history, two girls as well as two boys will be heading to London. The Mayor was joined at the finals day by Bollywood screen legend and the co-owner of Mumbai City football club, Ranbir Kapoor, as well as the Chairman of Queens Park Rangers, Tony Fernandes. The Mayor of London, Sadiq Khan, said: “This initiative is another example of the close links between India and London. It has been fantastic to see the passion and skill of these young footballers, and to be able to announce that two girls as well as two boys will be travelling to London to train with Queens Park Rangers. I wish them every success and it is heartening to see how grassroots sport can inspire, thrill and change the lives of young people all over the world. “The power of sport in bringing people together and encouraging healthy competition is a wonderful thing. It doesn’t matter who you are or where you’re from, once you’re on the pitch, on the court, in the ring or on the track how well you do is down to the drive and talent of the individual and their team – and those valuable lessons are transferable to so many other situations in life.” The event is the initiative of local politician and former Minister, Milind Deora, and the children selected to train in London were chosen from the thousands of competitors who took part in the soccer challenge based on their footballing ability. Next year they will spend 10 days training with QPR at their academy in Cranford.

Co-owner of Mumbai City football club, Ranbir Kapoor, said: “This event has given a platform to kids who love football. The professionalism and commitment by the organisers and the vision of Milind Deora is commendable. As owner of ISL Mumbai FC we will explore avenues to partner with QPR Mumbai Soccer Challenge. It’s great to have Mayor Sadiq Khan with us today.”

Milind Deora, patron of the Challenge Event and a former Indian Minister of State, said, “I am grateful to London Mayor Sadiq Khan our chief guest for today. Sadiq’s presence is huge encouragement to us and the kids. In the last 9 years we have strived to create a level playing field for those kids who have keen interest in football. Year after year we have realised the wonderful talent Mumbai kids have in playing football. I deeply appreciate Queen Park Rangers for their continued support and our innumerable sponsors who have been great encouragement.”

Co-Chairman of QPR, Tony Fernandes, said: “QPR is a football club with the community at its heart. While most of our charitable efforts are focussed on our home in West London, we are delighted that the Mayor of London has come to visit one of our fantastic international projects. I’m particularly delighted that next year we will host some Indian girls as well as boys at Loftus Road. Girls’ and women’s football is a big growth area for us, and we look forward to working with the Mayor and the GLA to promote it even further in London in the years ahead.”

focus on art, culture and heritage