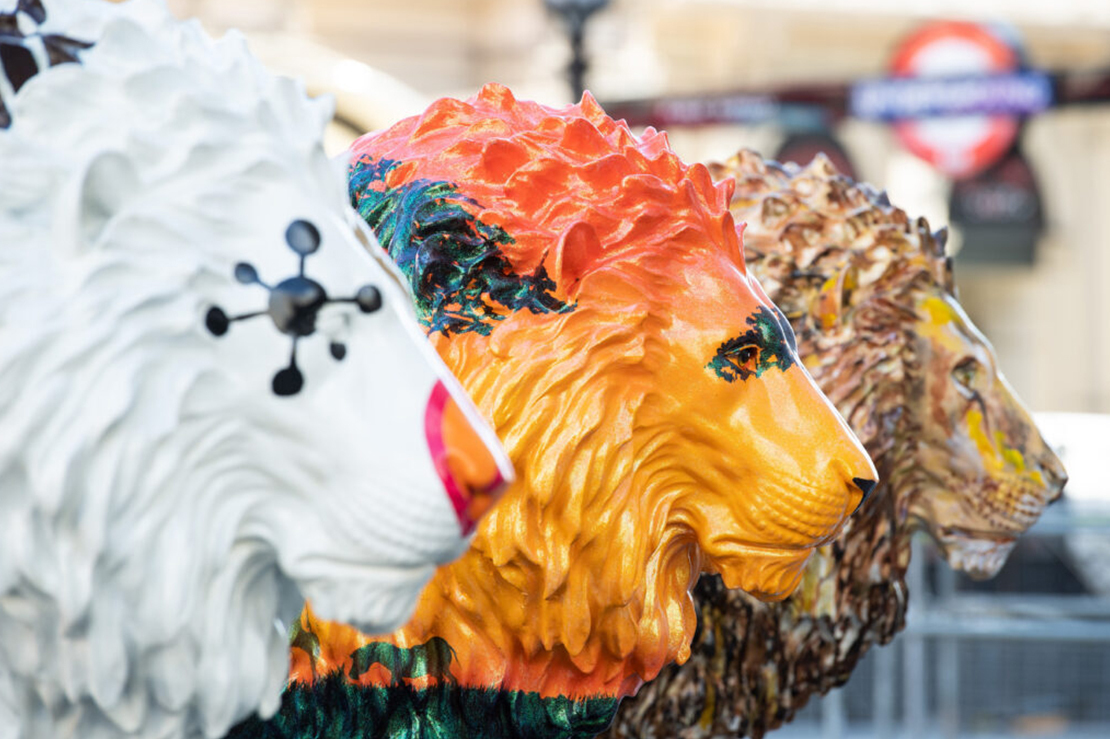 Tusk Lion Trail-a global art installation in support of African conservation which has landed in London, Bristol and Edinburgh.

THE LIONS HAVE LANDED

A pride of lions with celebrity credentials has taken centre stage across London, celebrating the iconic species through an exceptional street art exhibition.

London is now home to a pride of x27 individually curated life-sized lion sculptures which can be found at iconic landmarks around the capital until the end of September. These magnificent beasts have been designed or painted by a number of internationally recognised faces including Rolling Stones guitarist, Ronnie Wood; fine art photographer, David Yarrow; artists Jake Chapman, Gavin Turk and David Mach; and actors Mathew Horne, Noel Fielding and John Cleese.

Tusk has once again teamed up with Curator Chris Westbrook who has brought together a spectacular array of talented artists from the world of art, design, film, theatre and comedy, to release a phenomenal Pride of Lion sculptures across the world.

Following the huge success and popularity of the Tusk Rhino Trail in 2018, the British charity has launched 47 life-sized lion sculptures onto the streets in iconic locations worldwide including a number of UK cities (London, Edinburgh and Bristol), The Hamptons – New York, Sydney, Wellington and Nairobi.

The installation will encourage visitors to follow the ‘trails’ via easy-to-use physical and digital maps, allowing them to ‘collect’ lions as they go. This fun, interactive experience is the perfect activity for families.

The population of African lions is estimated to have declined by as much as 50% over the last 25 years. There are now fewer wild lions left in the world than rhinos. Each sculpture will highlight the magnificence of lions, threats to their existence and the people and solutions working for their survival – raising awareness for conservation efforts across the world.

DHL is the global lead partner for the Tusk Lion Trail, which is co-sponsored by ISPS Handa. The Trail in The Hamptons and New York is organised in partnership with the African Community and Conservation Foundation (ACCF).

ABOUT TUSK
Tusk’s mission is to amplify the impact of progressive conservation initiatives across Africa. The charity has earned a reputation for providing a highly efficient solution for funding wildlife
conservation programmes. Tusk partners with the most effective local organisations, investing in their in-depth knowledge and expertise. By supporting and nurturing their conservation
programmes, it helps accelerate growth from an innovative idea to a scalable solution. For more than 30 years, Tusk has helped pioneer an impressive range of successful conservation initiatives across more than 20 countries, increasing vital protection for over 70
million hectares of land and more than 40 different threatened species. But the threat to Africa’s unique natural heritage remains real and more urgent than ever.