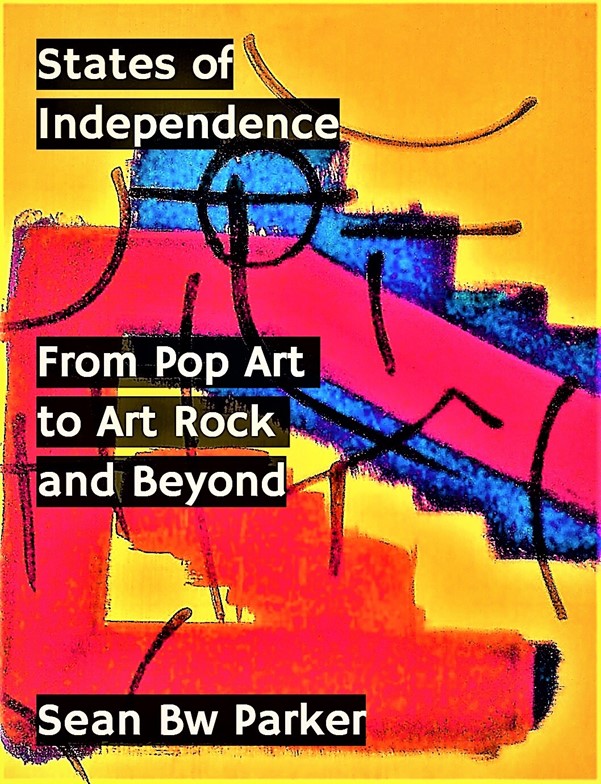 Sean BW Parker In Conversation-His book ‘States of Independence’ is a celebration of independent-spirited music that will have you reminiscing about moments in time!

Sean BW Parker (MA) is a writer, artist and lecturer in art, cultural studies and justice reform, born in Exeter in 1975. He lived in Istanbul for ten years where he gave TEDx talk ‘Stammering and Creativity’ at Kadir-Has University in 2013, and also lectured at Istanbul University.

I had the pleasure of meeting Sean to talk about his latest book ‘States of Independence’ which takes you back to times in your life where music was key in London’s cultural scene. All the tracks Sean writes about will undoubtedly have unique meanings to different people and reading about them made me nostalgic about unforgettable times in my younger years. Days discovering new albums while at secondary school and gigging and dancing with friends in the 90’s and noughties to probably the best music ever written. I bet certain feelings will re-emerge when you read this book. Music is feelings and Sean does his best to look inside some of the best tracks in independent-spirited music, and to locate the root of what they really mean.

Tell us about Kate Dale who you dedicated your book to.

The book is dedicated to Kate Dale, who was a tireless champion of independent-spirited music until her death in 2017. I met her following my return from Istanbul a few years before and discovered she had worked for The Cure’s label Fiction Records in the 1980’s. I also found out she was friends with the band’s long-time producer Dave Allen, whom she brought along to my Chi-Signs mini-fest in Chichester in 2015 and was a ‘meet your hero’ moment for me. Kate would seek out and promote interesting new acts everywhere her innovative curiosity led her and would never stop in her championing of them. The arts rely on people like Kate Dale far more than it will ever acknowledge, and she continues to be greatly missed.

What inspired you to write your latest book ‘States of Independence- From Pop Art to Art Rock and Beyond’?

I found myself in a place with no access to computer or the internet, but still with an almost physical need to write. I collected up all my remembered research from years of writing about what can be called art rock and put it together with the books I could find and my fine art education (from the University of the Creative Arts). Every day we hear about songs being banned or cancelled, from Frankie’s Relax to Pharell’s Blurred Lines, so I wanted to write a book that talked about what these songs really mean, beyond the politicised headlines of the culture wars. I have a long-held belief that Pop in all its forms is not as disposable as some critics have liked to make out, and the charts have never reflected this properly (being a tool of business as they are). This book looks at big business with the appreciative eyes of an art lover or music fan.

What makes an artist different and stand out from the crowd in your opinion?

Well, if only I knew … but the honest answer is that a generous PR budget deployed with a modicum of insight and imagination will make any artist stand out from the crowd. Repetition of one voice within a sea of other one-offs will work, purely by dint of insisting on attention. Another problem is that the new progressive orthodoxy in the arts only seems to have room for positivistic identity messaging, and I struggle to see much of the whole human experience within that. Artists and art orgs all need to wrestle free of culture-political considerations, otherwise they just become poster-children for another new machine.

What made you choose the artists and songs that you write about in your book?

The truthful answer to that is that they are songs which have stayed long after either their release, or when I first heard them. To counter any accusations of over-subjectivity, I made sure I analysed them for circumspection and deeper context, to make sure it wasn’t all about ‘good times’. But they’ll all be good time memories for some people! I can’t pretend Bon Jovi’s ‘You Give Love a Bad Name’ is an all-time favourite for example, but it sums up a universal transatlantic feeling in the mid-80s, so earned its place by cultural relevance (and big hair) alone. Is that song as ‘gaslighty’ as it might seem now? How important is social context in how we hear these songs? Every track covered is checked for this weight of multi-levelled meanings, beyond just the tunes.

How would you describe the spirit that connects different artists that you write about in your book i.e. Amy Winehouse, The Roots, The Cure, Public Enemy, The Flaming Lips, Blur, Bjork etc?

Great question. As your list indicates, it’s not genre that connects them, nor financial independence (re: having no money). Most of those were, or are on major labels anyway, and now every artist is, if they market their wares through Amazon, Youtube or itunes. So it’s not the financial aspect of making modern alternative music that matters, as being a part of something wider now necessitates the old-school notion of ‘selling out’, and even original 1976 punks realise that (as they pay for their grandchildren’s school fees). So, the spirit that connects those mentioned above is a spirit of idiosyncratic independence, juxtaposed with a certain stubborn charisma. They’ve been marketed and image-manipulated somewhere along the line, but their individuality stands out despite that.

A counsellor once told me music and culture were my ‘nurture’, and I fell back to them at times of distress through not having had enough love in the family home. To me the arts and creativity in general represent the highest of human values, outside us and within us at the same time. I have had epiphanies from experiencing a certain moment in music or film that were never replicated elsewhere. I guess that’s pretty nurturing.

Who are the writers you most admire?

They tend to be either dead males writing poetry, novels or philosophy, or living females writing about culture. Thomas Hardy wrote about British aspiration like no other. Dylan Thomas invented a new genre of the music of words through modernist poetry, and Jean-Paul Sartre explained the real roots of anxiety decades before it became endemic. Steven Pinker and Will Self are both still alive, and I’m an enthusiast of both (particularly Pinker). Ella Whelan writes and presents brilliantly on the necessity for the end of identity politics, and my guilty pleasure is Julie Burchill who writes with a sort of autistic honesty from the depths of human truth. It helps that I interviewed her a few years back too.

What would you like your readers to get out of your book?

If the reader is younger, hopefully to be turned on to an artist about whom they’d heard but didn’t know much about. If they’re older, the recognition that those songs or artists they loved so well aren’t as disposable or irrelevant as others may have made out – they were just critics, with their own axes to grind. For those between those ages, an entreaty to listen beyond what other people have said about an artist or song, to listening to the song itself. Do you really think it’s so immoral for Rod Stewart to write a whole song celebrating someone’s legs? How do we feel about Freddie Mercury writing a whole song about his orgasm (Don’t Stop Me Now)? Why did the young Coldplay sign such an endless-seeming record contract?

What advice would you give to a young person writing their first book?

There are a lot of people out there who want to be drummers and guitarists, but who find out when they try that they’re not much cop. Some get better with practice, some don’t. It’s the same with writing. Try to work out if you just aspire to be a writer, or if you have a genuine need to express yourself through words. If it’s just an aspiration without a need, and that need doesn’t grow, then find something else to aspire to because there are more than enough books out there already. If you write from the heart, without editing (leave that till much later) and express unfiltered from an individual perspective, it will be picked up on. Maybe not today, maybe not tomorrow, but soo…you get my point.

You’ve achieved so much already what’s next and what in your opinion has been the most culturally impactful moment for you this year so far?

I’m tempted to say the funeral of Queen Elizabeth has been the most culturally impactful moment of the year so far, but the truth for me is that it was watching the David Bowie biopic Moonage Daydream at an imax cinema. It was like being inside one of Bowie’s dreams of his own life. The TED talk I did was called Stammering and Creativity, and I’m working on publishing a companion book to it (nine years later) titled Stammering and Culture, which will be a look at the condition from inside and out, with the humour lacking in most work on the subject, and referencing Blackadder, The King’s Speech, The Life of Brian, A Fish Called Wanda etc. I also have a poetry collection coming out next year with the working title of Panopticon, gathering poems I’ve written or had published over the last few years.

If you would like to listen to the tracks written about in the book, check out the ‘States of Independence’ Spotify playlist here: https://open.spotify.com/playlist/41g1mhkS0xgddxLPk4m0ly

Hard copies of States of Independence: From Pop Art to Art Rock and Beyond can be purchased here:

This interview was put together by Jules Nelson.

About the Book: States of Independence: From Pop Art to Art Rock and Beyond is an attempt to look inside some of the best tracks in independent-spirited music, and to locate the root of what they really mean. In a time of artists and creatives being ‘cancelled’ or edited in any way because of not being on-identity-message, it behoves any cultural critic to try to look inside that to see what’s going on. Do you really want your culture spoon-fed to you, having passed trigger-warning checks to make sure it might not offend? Why can’t some governors at open prisons allow the bands of rehabilitating prisoners to even practice Pink Floyd’s Another Brick In The Wall, in case there are any objections to the line ‘Hey, teacher, leave those kids alone’?

But it’s also a celebration of the best music written over the last half-century and beyond. Independence in the music industry can no longer be defined as independence from corporate patronage, as every artist needs to be heard on a media platform of some (generally corporately owned) kind; but those corporations rarely interfere with their artist’s material any more, being more interested in those artists hopefully saying something even slightly controversial – as it’s controversy and conflict that sells. But, the only way to say something controversial is to rail against the dominant ‘woke’ orthodoxy in Western culture, to which these corporations now universally subscribe. There is the cultural Catch-22 which lies between the lines (and photos) in States of Independence.