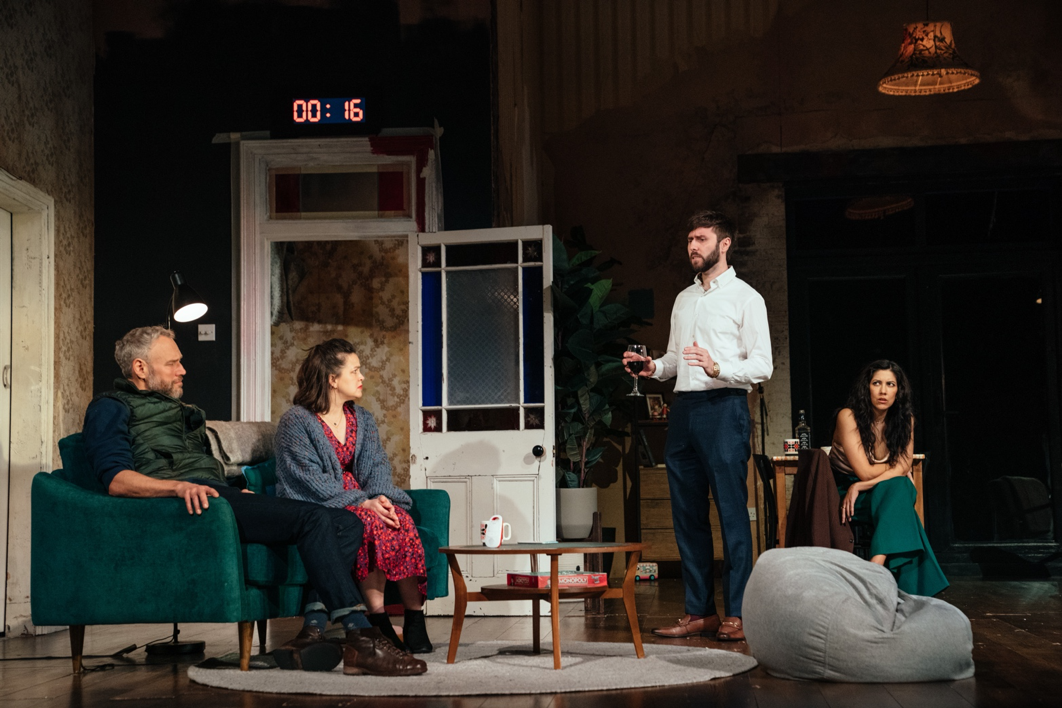 Amid all the blinking and colourful signs of Piccadilly’s theatre venues, the Gielgud Theatre has recently put up its own intriguing seasonal title: 2:22 A Ghost Story, back by popular demand. Written by Danny Robins and directed by Matthew Dunster, this record-breaking play is a must-see of the London scene this Winter. This terrifying and yet meaningful experience with an unexpected twist will be loved by thrill-seekers as well as psychological drama enthusiasts.

The tone is set from the first few minutes of the play: a panicked woman enters the stage as a baby’s deformed cry emanates from a baby monitor. Behind her, a gigantic red digital clock shows the time. The woman runs out of the stage, and as the clock strikes the fateful time of 2:22, a loud inhuman scream fills the room and the stage turns bright red. This introductory scene has the public collectively jumping up in terror, leaving them with a dreadful feeling of fright that will haunt them for the rest of the play. The show doesn’t only rely on ear-bursting screams to scare the audience. In fact, its first purpose is not even to scare, but to reflect the tormented domestic lives of its four main characters within their deepest intimacy.

Jenny (Giovanna Fletcher) is throwing a housewarming party in her newly renovated house the night her husband Sam (Elliot Cowan) comes back from a mysterious trip. The couple invites Sam’s college friend Lauren (Stephanie Beatriz) and her current fling, bathroom renovator Ben (James Buckley). Throughout dinner, Jenny confesses that she believes that a ghost appears in the room of her baby Phoebe every night, exactly at 2:22 am. Seeing her friends’ disbelief, she dares them to stay until that hour to witness the ghost. As the friends wait, the night unveils in a succession of revelations, psychological drama, philosophical discussions and speculations. The play slowly shifts from focusing on the spirit to revealing the real ghosts of the story, the personal chimeras that haunt every character, going from regretted forbidden loves to tormented marriages.

The dynamics between the characters holds the play together, achieved by stellar performance of the cast. Emotions are conveyed impeccably, from Jenny’s hysterical outbursts to Sam’s obsession with finding a logical explanation for everything. Also, Lauren’s sarcastic bitterness and Ben’s ingenuity and humour are genuinely convincing. The lines flow by and come together as very natural conversations, and the occasional jokes and banter contribute to some much-needed light-heartedness. The dinner is casual, yet the play doesn’t let us forget that this is a ghost story: the big projection of the clock is a constant reminder of what is to come, and acts as an exasperating ticking bomb. Everything is designed to play with the nerves of the public: the macabre cry of the baby in the monitor, the lugubrious glass-doors that give into a foggy backyard, the horrific screams of the foxes in the garden… Even the set design (Anna Fleischle) of the unfinished house, still decorated with a half-ripped old wallpaper and unfinished half-painted walls, has an eerie vibe that will subtly make the public uncomfortable. The horror is never too “in your face”, which allows it to keep a veil of mystery that is a thousand times more terrifying than any prop or bad ghost costume.

2:22 A Ghost Story is a horror story full of humanity, that will have you jump on your seat more than once and leave you with more questions than answers. If you want a chilling alternative to the countless Christmas shows of the season, this is the show for you: https://222aghoststory.com.

Reviewed by Céline Galletti- Celine is a volunteer writer for Abundant Art. Originally from France and Italy, she follows her passion for writing and art by studying Comparative Literature at UCL, London. As an international student living in London, she is determined to fully experience and understand the city’s vibrant arts scene and be a part of its creative storm.