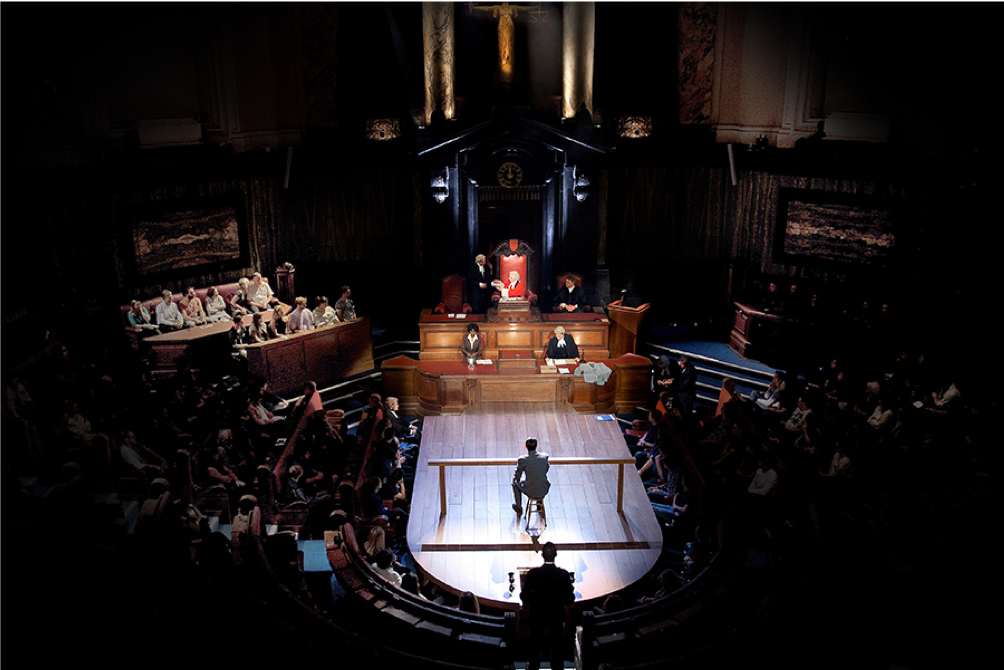 Have you always been secretly convinced that you have what it takes to be a judge? Here is your chance to find out (and probably be proven wrong) with Lucy Bailey’s new adaptation of Agatha Christie’s ‘Witness for Prosecution’ at London County Hall, South Bank. The story is a rollercoaster that will constantly keep you on the edge of your seat, which is highly due to the immersive aspect of the setting.  London County Hall is a historically charged and architecturally remarkable place that adds a lot of gravitas to the play. The public is therefore actively invested in what happens on stage, although nothing can prepare you for the final twist. In true Agatha Christie fashion, it will take everyone by surprise and put the audience in a state of genuine shock!

The story follows Leonard Vole, a genuine and simple-minded man, who has been accused of murdering his lover Emily French, a wealthy middle-aged woman, to inherit her money. We follow the evolution of his trial, punctuated with new witnesses and clues, dramatic revelations and different settings. The barrister Sir Wilfred Robarts does his best to convince the audience and the jury of Leonard’s innocence, despite Leonard’s seemingly hostile German wife, Romaine. Be careful who you trust, as nothing is as it seems and the roles switch constantly throughout the story.

The play is based on a short story by Agatha Christie and was published as “Traitor Hands” in a magazine in 1925, and has since been adapted to stage, television and film – the 1957 film adaptation starring the iconic Marlene Dietrich as Romaine and Tyrone Power as Leonard is highly recommended. The story was very successful despite being quite different from Christie’s usual work: in addition to not starring any of her iconic characters such as Miss Marple or Hercule Poirot.

The main appeal of the play is getting the audience exactly where it wants to, especially through the use of sympathetic characters and unreliable narrators. While the actors are being tried in court within the plot, the audience is engaged in playing the role of the jury. This plunges you into a sort of metatheatre that blurs the border between fiction and reality. These charming anti-heroes who are able to manipulate the public are particularly popular with audiences, as they represent a form of mystery and ambiguity that tends to arouse our curiosity.

This play can be seen as a reference to the trial of Ted Bundy in recent times, where the audience can’t help but love the charismatic and handsome young man ignoring the atrocities he is being accused of.

The pace of the play is quite unusual for a Christie story: the story starts in the middle of the drama and works through flashbacks and character narration instead of progressing linearly through time. Furthermore, the final verdict of the jury is far from being the end of the play, as it causes a succession of new drastic events and revelations. The director of the play Lucy Bailey, along with her cast has brilliantly worked on keeping this method of storytelling fluid by seamlessly oscillating between the past and the present without losing its dynamic pace.

The setting, costumes, performance, score, and dramatic tone can be closely compared to what you would find in a Greek tragedy and are executed flawlessly. Do get your tickets at https://www.witnesscountyhall.com