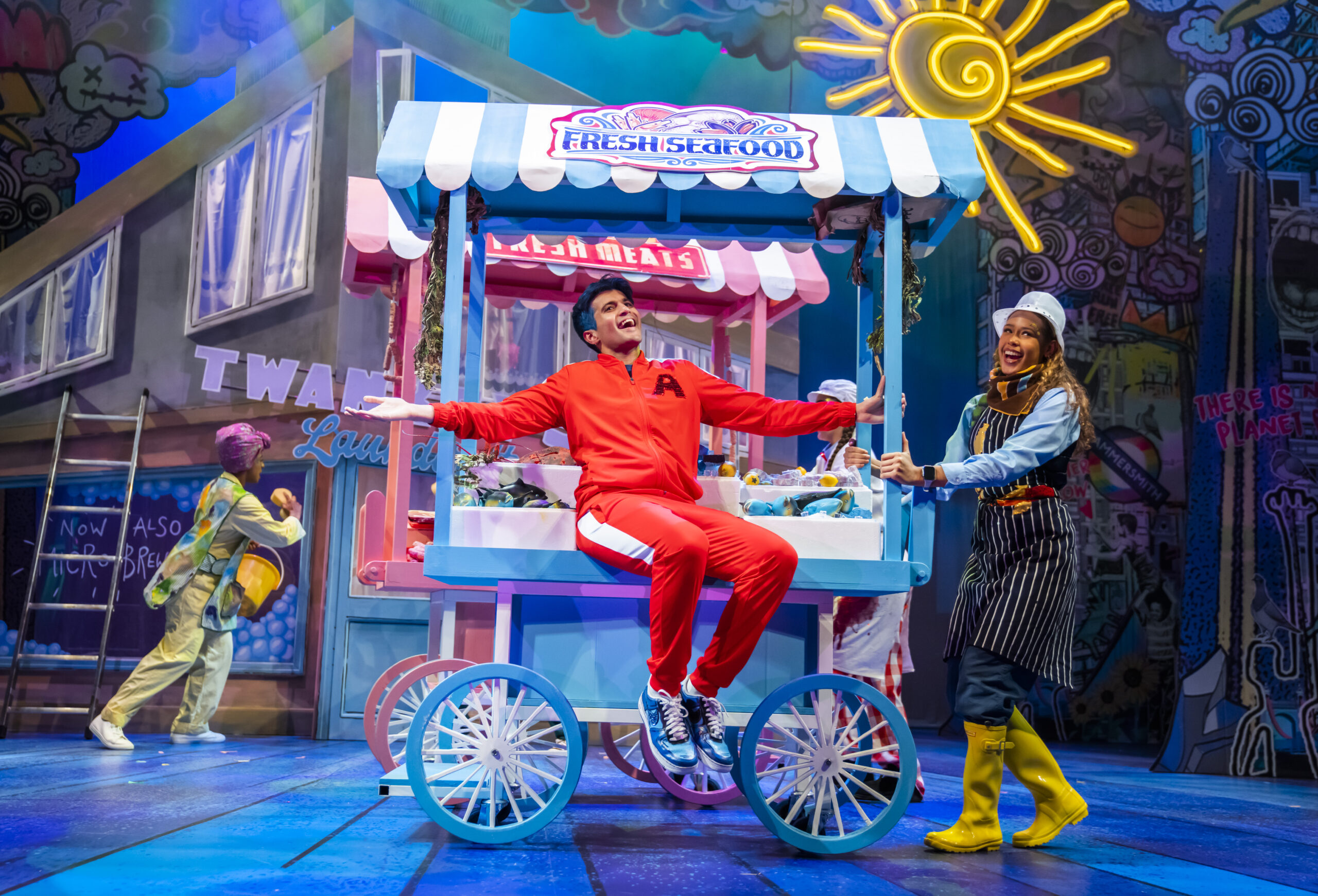 There is no better way to celebrate Christmas in theatre than with a traditional pantomime. This year, Aladdin Pantomime lives up to the task by delivering a bizarre, fun and colourful adventure that will delight audiences of all ages. The hilarious modern take on the tale directed by Abigail Graham and written by Vikki Stone stars a talented cast whose performance is full of charisma, energy, witty improvisation, and singing talent.

The story takes place in Hammersmith, where one day the street boy Aladdin (Qasim Mahmood) falls in love with Princess Jasmine (Ellena Vincent), who dreams of becoming a graphic designer for comic books instead of being a princess. As he attempts to impress her, things take a wrong turn and Aladdin gets arrested by the King (Kate Donnachie) and his malefic advisor Abanazer (Irvine Iqbal). This provokes a series of events that Aladdin will have to face with the help of his sister Wishy (Gracie McGonigal) and his new friend, the Genie of the lamp (again played by Kate Donnachie).

A fantastically bizarre adventure full of songs, gags and costumes, and yet quite anchored to reality: the magic city of Agrabah from the original tale is turned into the streets of London and Hammersmith; there are countless mentions of Covid and the uselessness of the NHS app; and the pop culture references are endless. This modern aspect is ground for some social commentaries: Jasmine is turned into a feminist icon, Dave Twankey (Stephan Boyce) breaks gender codes by proudly wearing a dress and the King’s comically large blonde wig and blue costume resemble a certain British Prime Minister, who is thoroughly mocked through the whole play.

Satire is indeed a primary component of the piece, as every character is turned into clownish versions of their original counterparts in the tale. Abanazer is an exaggeration of the classic dramatic villain, always accompanied by thunderstorms and giving expositions of his evil plan on a PowerPoint. The King, as indicated by his oversized clown shoes and costume, is a literal clown who is constantly outsmarted by everyone because of his outrageous stupidity. Aladdin is turned into a douchebag that only wants “the bling” and uses the genie solely for materialistic purposes, although he learns his lesson throughout the story. Furthermore, the original cast is joined by two new extravagant characters: Wishy, Aladdin’s sister, whose only dream is to have a friend, and Dave Twankey, the flamboyant owner of a laundrette that is turned into a microbrewery.

However, the most striking aspect of the play is the set design and the special effects designed by Lily Arnold, as is often the case in Pantomime. The colourfulness and bizarreness of the play are creatively embodied by the various settings such as the Cave of Wonders and the magic carpet ride, where the carpet literally leaves the stage to float over the audience. This plunges you into an immersive world of glitter, colours and cheerfulness that guarantees two hours of pure laughs and cheers.

Get your tickets at https://lyric.co.uk/shows/aladdin-2021/