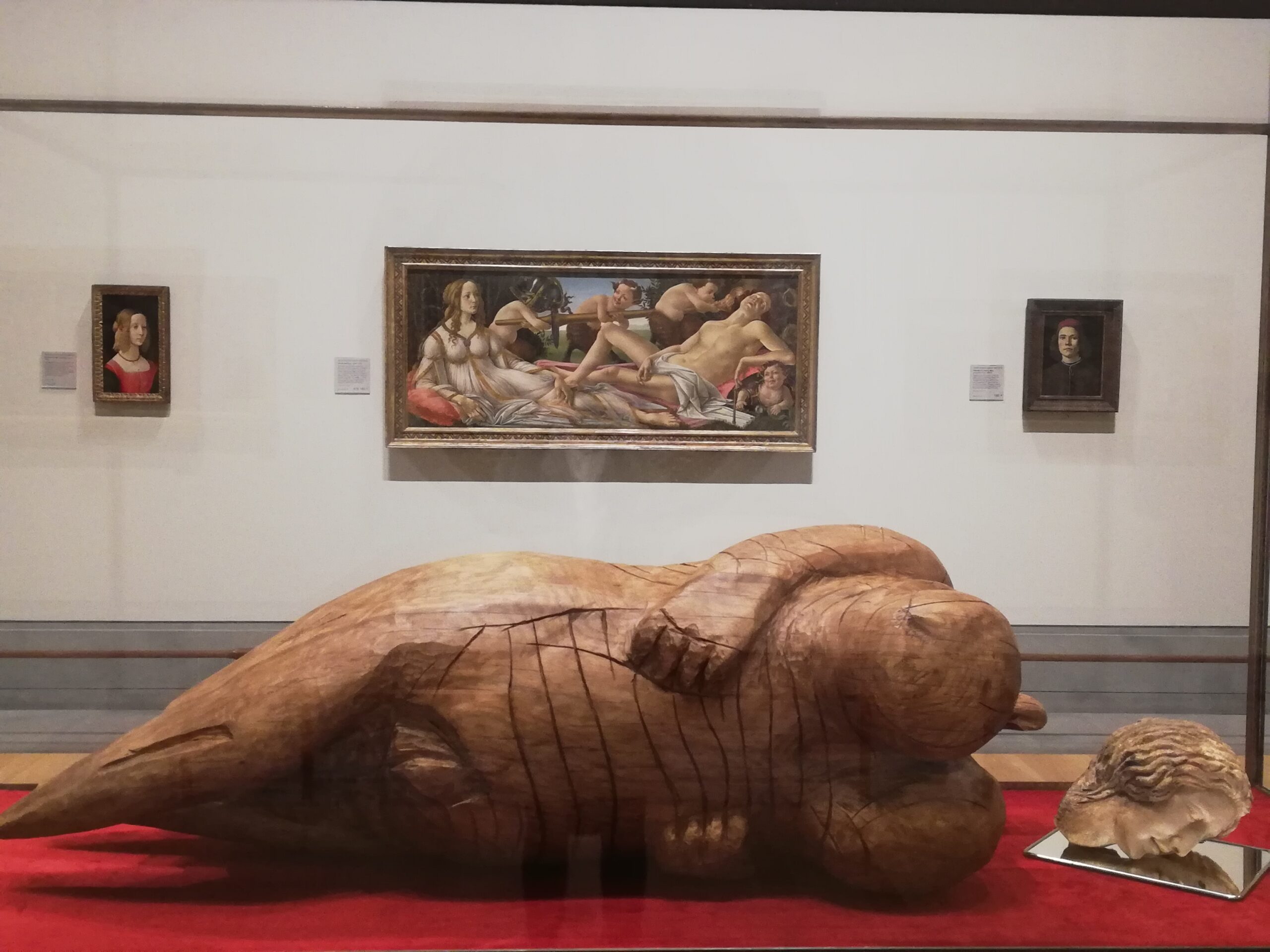 Ali Cherri: If you prick us, do we not bleed? – National Gallery Review

If you prick us, do we not bleed?  by Ali Cherri, current Artist in Residence at The National Gallery, introduces cabinets of curiosity into the heart of the Sainsbury Wing, containing assembled fragments and sculptural installations. These allow us to discuss how histories of trauma can be explored through a response to museum and gallery collections.

Born in Beirut in 1976, Ali Cherri is the second Artist in Residence at the National Gallery. His residency is part of the National Gallery’s new Modern and Contemporary Programme launched in collaboration with the Contemporary Art Society, and in partnership with the Herbert Art Gallery and Museum, Coventry to display new work in their spaces. The programme connects the world’s most innovative artists with the nation’s iconic collection.

Starting with research into the Gallery’s archive, Cherri has uncovered accounts of five National Gallery paintings that were vandalised while on display-The Virgin and Child with saint Anne and the Infant Saint John the Baptist, Leonardo Da Vinci (1499-1500); The Madonna of the Cat, Federico Barocci (1575); The Toilet of Venus, Diego Velasquez (1647-51); Self Portrait at The Age of 63, Rembrandt (1699); The Adoration of the Golden Calf; Nicholas Poussin (1633-4). Presented in five vitrines reminiscent of early museum displays and surrounded by Renaissance paintings that depict wounded figures and suffering, Cherri’s installations appear like relics, mortal remains of what these works once were, of what they could have been. As we see in The Madonna of The Cat, after Barocci (2022), the affliction has repercussions on the little goldfinch that baby Jesus playfully clutches in his hand in the original painting, slashed by a knife in 1990. The bright red markings around his beak, which are thought to come from a drop of blood that fell from Jesus Christ as he carried the cross to his crucifixion, now become the emblem of the living wound inflicted by the blade that tore him from his innocence, rendering him lifeless under the crushing weight of a porcelain cast of a hand sculptured by the Lebanese artist.

Cherri’s works are yet to find peace after the mutilations suffered. They are still vulnerable, made of clay or changed into something else “to become beastly”, as in the case of the golden calf depicted in Poussin’s work that was vandalised with spray paint. Cherri chooses a lamb that dies from severe birth anomalies to represent the metamorphosis. By translating each injured work into a series of objects partially castigated and handicapped, the artist reminds us that we are never truly the same after experiencing violence.

The exhibition reveals the role played by the public’s highly emotional response to these aggressions, finding that newspaper articles would describe the damages as if they were lesions inflicted on a living being, even referring to the conservators as “surgeons”. This humanization of artworks and the overwhelming urge to heal, hide and alleviate their pain is implicitly addressed in the title which recalls Shylock’s words at the beginning of the third act of Shakespeare’s Merchant of Venice: “If you prick us, do we not bleed? If you tickle us, do we not laugh?”, highlighting how the collective response to trauma and violence is the trauma itself. Through the use of mixed media that recall certain aspects of each painting, he envisions a new life for them following the assaults, and he invites us to reflect on the decisions we make about how we display trauma and to what extent we are willing to cope with the aftermath.

The exhibition brings into question the ‘politics of visibility’ which, as John Berger had already amply expressed in Ways of Seeing (1972), identifies within the image a political effectiveness that ties directly to relations of power, that is the relationship between what we see and what we know. Do the ways in which these artworks have been damaged influence the way we look at them? How far did the damages contribute to turning these works into masterpieces? The desire to tell the stories of these five paintings is certainly dictated by the need to rethink the role of a museum in times of crisis. Equally intuitive is the choice of exhibiting his works in vitrines, to contrast the very nature of the original paintings and the place where they are currently exhibited. The glass that separates the visitor from the artworks thus acts as a shield against possible attacks that can further alter the essence of the original works, preserving them in the safe and circumscribed space of the cabinets as collectible items. But it is also a symbol of the frailty that characterizes them and the vulnerability which they are exposed to, under the prying eyes of those who observe them with curious sympathy.

Cherri’s interest in the aesthetics, practices and politics of classifications and collecting in museums emerges in the staging of this exhibition and the decisions we make about how we experience, and to what extent, we accept trauma within museums.

Ali Cherri’s After the Rokeby Venus photographed by Rachele Nizi.

Reviewed by Rachele Nizi. After completing her MA in Reception of the Classical World at UCL, Rachele joined Abundant Art as a creative writer. Her British and Italian origins have inspired her to want to study Art History and European Literature, with an interest in the afterlife of antiquity in the Western tradition.