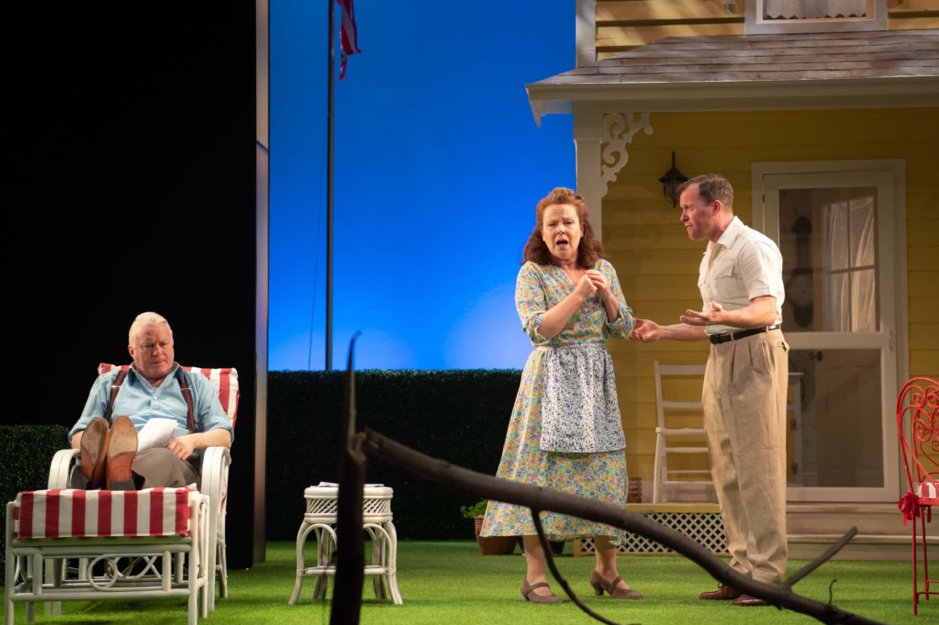 All My Sons – Queens Theatre Review

A new production of the now-iconic play “All My Sons” is currently running at Queen’s Theatre Hornchurch, putting on stage the suburban life of a typical American family of the 1940s. Written by Arthur Miller in 1946, the story offers a cold criticism of the American Dream, which caused many legal problems to the author at the time of the Cold War. Director Douglas Rintoul follows the original script with amazing fidelity, plunging us into the universe of the Western post-World War Two era with a realistic immersiveness.

August 1946. Joe Keller (David Hounslow) is an American businessman living a seemingly unproblematic domestic life with his wife Kate (Eve Matheson) and son Chris (Oliver Hembrough). The family is still shaken by the grief of losing the younger son Larry to the war, a loss that is symbolised by the broken tree in their garden, a lugubrious image that will gloom on set for the whole duration of the play. Chris is planning to propose to his brother’s past love, Ann Deever (Kibong Tanji), but dreads the reaction of his mother who is convinced that her younger son is still alive and that therefore Ann belongs with Larry. The play introduces us to this already dense initial situation rather instantly but manages to give all the information without dumping it on the audience.

The real twists and turns begin when we discover that Ann is the daughter of Joe’s past friend and colleague in the war, Steve Deever , who caused the death of 26 American pilots by shipping faulty aircraft pieces. But when his first son George (Nathan Ives-Moiba) visits him in prison, he discovers that not everything is as it seems and that he must save his sister Ann from marrying into the Kellers. The plot unveils in a sequence of revelations, familial drama and insightful character psychology, revealing a story worthy of the most cataclysmic Greek tragedy.

Miller’s play is an open letter to his contemporaries, empathising with their traumatic experience of war whilst also criticising the hypocritical ideal of the American dream. He especially explores the difficulty of going back to normality after having faced the horrors of the war. The toxic idea of not facing trauma and obsessively wanting to progress is impersonated by Joe, the patriarch who is ready to bury the past and act immorally in order to keep his business growing. Kate represents the feeling of grief of the countless people that lost loved ones during the war, whilst George characterises the survivor’s guilt of those who didn’t lose their lives on the battlefield.

The play is quite clearly representative of its epoch, which is underlined by the very historically accurate set (Queen’s theatre workshop) and costumes (Nicola Thomas). However, there is a sort of timelessness and relatability to the domestic tragedy of the dysfunctional family, and many of its marking statements will resonate with anyone.

Get your tickets at https://www.queens-theatre.co.uk/whats-on/show/all-my-sons/