All the Things You Said You Never Said Before You Thought You Could Ever Say. Oval House,17 – 28 March – Abundant Art 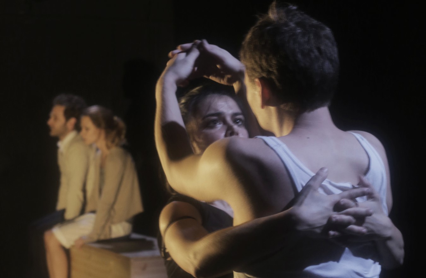 All the Things You Said You Never Said Before You Thought You Could Ever Say. Oval House,17 – 28 March

There are two types of people in relationships, those that hold their tongue and do not speak their minds, and those that do not hold back. This piece of physical theatre explores these two realities of expression and plays around with the question ‘what would happen if I reacted differently’?

As the four performers are introduced to the audience, it becomes clear that they are not playing two separate couples, but instead play the same couple but from different perspectives. Conversations are repeated and replayed by the performers allowing the scenarios to be reworked and relived. The locations for these exchanges are often mundane settings such as doing the laundry, or making breakfast. These commonplace scenes add a light, comic flavour as every person in the audience can relate to these unassuming battlegrounds. The females become more and more vocal and frustrated with each relived scene, and the males respond accordingly. The dispute that takes place over making coffee in the morning stands out, as the text (written by performer Anthony Nikolchev) and enactment build up so skillfully, it is almost funny from an audience member’s perspective, as you watch how easily misunderstandings and miscommunications can bubble up into an explosion, or thunderous silence.

Conversations are interrupted by moments of passion and love shown through well-executed contact work. Small intimate connections grow and build into complex lifts and exaggerated motifs. Considering that none of the performers are strictly from a dance background, these moments are performed smoothly and with ease. It is clear to see here, the influence from Vivien Wood, a dancer who has worked with Michael Clark and DV8, as she spent some with the company as rehearsal director.

Despite there being pockets of text and storyline that were unclear, the clever interplay between the performers was successful. I did however leave feeling slightly confused, as after an hour of this question being posed and explored by the performers, there was no resolution or conclusion offered.