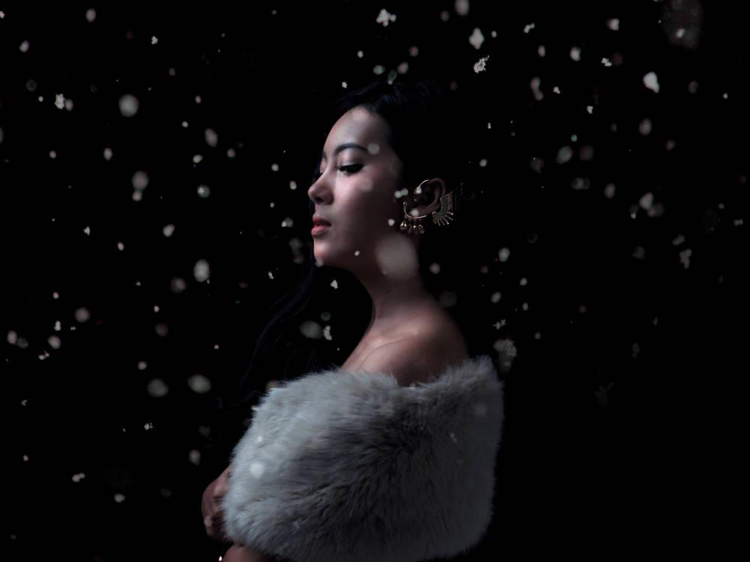 The Guildhall School of Music and Drama takes on Marina Carr’s adaptation of author Leo Tolstoy’s classic tale ‘Anna Karenina’, a chaotic yet raw journey foregrounded in lust, love, loss and tragedy. ‘Anna Karenina’ is centered around the love lives of two women; Anna, who has grown tired of her tedious marriage to politician Karenin and enters an adulterous romance with army officer Vronsky and Kitty Anna’s sister-in-law and the courtship between her and landowner Levin. The story deals with a wide range of topics such as family troubles, mental health issues, addiction, gender, marital and relationship issues.

‘All happy families are the same. Each unhappy family is unhappy in its own way’ is the first line we hear in the play. It then opens with Anna walking into an argument between her brother and his wife that has been caused by her brother’s adultery – this seems to foreshadow the events that occur within her story throughout the play. Anna is tasked by her brother to use her in persuading his wife to forgive him (in which she succeeds). It is on this quest that she meets the charming Vronsky, and whilst she initially is reluctant, Anna and Vronsky soon enter into a lustful and passionate affair.

As the romance begins, the spiral into drama and tragedy surrounding it commences. One scene that stands out, occurs after Anna tells Vronsky that she is pregnant with his child at Vronsky’s horseracing event. After a vigorous race, he injures his horse, causing Anna extreme distress. This emotion from Anna is predominant throughout the play. Her intense stress causes her to confess her infidelity to her husband Karenin, whose biggest concern seems to be the reputation of their image and the gossip that may ensue more than anything else. However, as she persists with the affair Karenin eventually decides that it is time to file for divorce. From my perspective whilst watching this play, it was difficult to not feel sorry for both parties. Anna perhaps feels that there is something missing in her marriage and is suffering from mental health issues and Karenin is having to come to terms with his wife’s adultery. He has to deal with Anna being unable to deal with the guilt and running away with Vronsky leaving him to take care of their son alone. As the story develops, Anna begins to become more distressed and paranoid, constantly questioning whether Vronsky still loves her and if breaking her family apart (causing pain to those around her) was worth it.

The set design is quite simple – there is an iridescent rectangular box being present throughout most of the scenes. The costumes are typical of what you would expect aristocrats, army officers and people in their social network to wear during the 1800s. The motif of trains is present throughout the play and this is featured where Anna and Vronsky first encounter each other. The use of trains is perhaps to signify the derailing of Anna’s life after beginning her affair with Vronsky.

Anna Karenina is a story that for years has divided people, and the Guildhall theatre’s production is no different. Some see her as a loving mother who also wanted to look out for herself and others see her as selfish and egotistical. The actors do a fantastic job at portraying Tolstoy’s characters as complex and interesting, allowing the audience to leave the theatre having much to think about after their unforgettable performances.