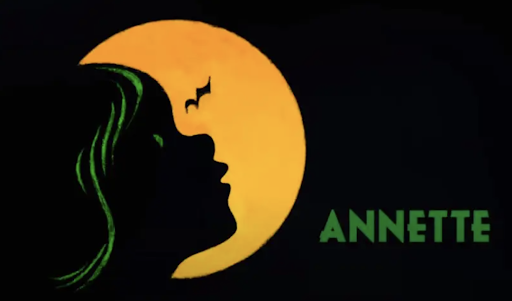 Highly praised by critics and the Film Academy alike, the psychological drama and musical Annette – with Adam Driver and Marion Cotillard as protagonists – has won many awards, for example, the Cannes Best Director Award for Leos Carax’ work.

Annette, which is the title of the film as well as the name of the (puppet) child of failed comedian Henry McHenry and renowned opera singer Ann Desfranoux talks about the relationship of the two adults and how it crumbles once baby Annette is born. It follows Henry from being a much-loved comedian to becoming unpopular and hated by his fans while the career of his wife Ann seems to excel.

Intimate scenes, magnificent costumes, and impressive sets transport the viewer into a fairy-tale world. Moreover, the rather dark plotlines of murder, exploitation and manipulation remind me of Gebrüder Grimm’s ‘Märchen’ and add almost a psychological thriller effect.

The music created by American pop and rock duo ‘Spark’ enhances the story with simple, repetitive lyrics and adds weight to the story while Marion Cotillard’s voice will certainly give you goosebumps. Overall, I was mesmerised by the screenplay, the beautifully crafted set and costumes and the voices and performances of the actors were absolutely stunning too.

If you would like to see a musical that is familiar but different at the same time, I would highly recommend watching Annette. It left me feeling confused about the world, bringing up a lot of different emotions and putting me into a dream-like state.

Reviewed by Giulia Ciccolella – Giulia is interning with Abundant Art during the month of October and supports the organisation writing reviews and helping with marketing and PR. Giulia is German-Italian and graduated with a BA in Media & Communications with first-class honours from Goldsmiths, University of London. She has been living in the UK for over three years and is excited to explore London’s art scene further while learning more about the work of Abundant Art.