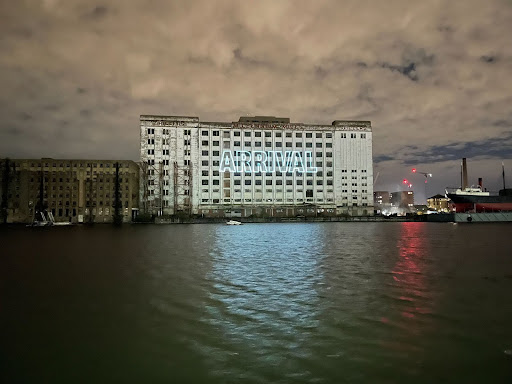 An immersive and community-led show,  ‘Arrival’ was co-created by 2012 Paralympic set designer Jon Bausor and West End director Matthew Dunster from Lily Allen’s recent production 2:22 A Ghost Story. As part of this year’s Royal Docks Festival, the theatrical show was different from what I expected and it opened my eyes to other ways of experiencing theatre.

Headphones were provided when we arrived and the show started with an outdoor dance performance by young local people from Newham. After this performance, the journey continued, and we followed our guide through the dark streets of Silvertown in London. I enjoyed this part the most since I was able to explore a new area while listening to historical accounts from residents who lived there in the 1990s. Part three was similar, but suddenly we went from being in the 1990s to a wartime party in the 1940s. It was interesting to see the performers dancing and partying on top of cars before the chilling air raid sirens sound appeared. Then, in a flash, we were guided to the next section of the performance while listening to an interview with a survivor of the Beirut Blast that happened in August 2020.

Sitting in front of the abandoned, spooky Millennium Mills fabric, all groups were brought back together to watch another performance by various actors representing different stages of life (e.g. a wedding, a yoga class, a day at work). All of this was accompanied by a DJ set and sound effects, giving the viewer room to interpret and digest the information of the previous and current parts of the performance and see how they all worked together. This part of the show ended with a surprise appearance of Little Amal – a 3.5m high puppet by theatre group Good Chance who walked through Europe representing a Syrian girl finding refuge in Europe. This added to the meaning of the theme and the name of the show ‘Arrival’.

For the final part of the performance, we walked another ten minutes to the other side of the docks where a short community film was projected onto the walls of the Millennium Mills fabric. This film gave a platform to multiple voices from different ages, abilities and ethnicities of the area. It talked about gentrification, ‘arrival’ in the sense of migration and what the community wants the Royal Docks area to be.

Since the whole show is created by the local community, especially younger residents of Silvertown and the borough of Newham, I felt like I was experiencing the place as a whole – getting to know its history, residents, ambitions and dreams. The appearance of Little Amal, as well as the interview snippets from the Beirut Blast, added an international perspective to the topic of ‘Arrival’ and the local area of Silvertown/ Newham (which used to be London’s gateway to world trade and hence migration) re-emerged as a place of global significance. I enjoyed my time at the Royal Docks and the show gave me a lot to think about.