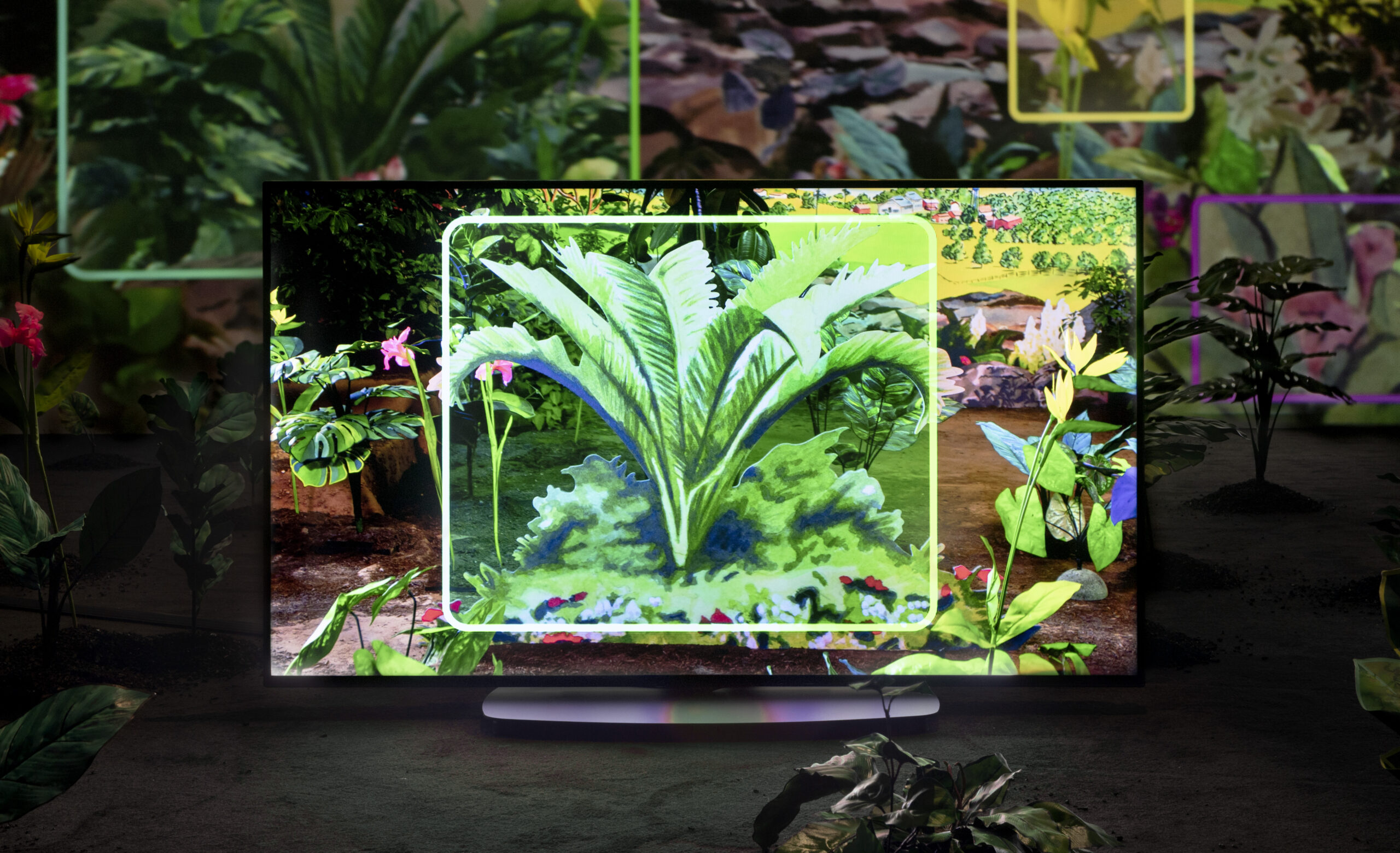 Dean’s multimedia work is placed in a dark room behind heavy wooden doors. Four portrait television screens stand staggered in the foreground and a large landscape screen stands in the background. Potted plants are dispersed between them – luscious green leaves with bursts of bright pink occasionally illuminated by the glare. On the large screen, the ‘assistant’ stands in front of a painted backdrop, staged like the protagonist in a 1930s movie. In fact, the whole scene is reminiscent of the Wizard of Oz – illustrated landscape, melodic voices, underlying sense of unease in every scene.

Amazon investigates the changing nature of labour in an increasingly neo-liberal economy. Responding to Dean’s research in the archives of the Ford Motor Company in Detroit, the video starts in Fordlandia, a city founded by Henry Ford in 1928 in the Amazon rainforest. Initially built to control rubber production, Ford enforced brutal working hours and mistreated workers, resulting in a mass rebellion and the eventual abandonment of the site in 1934. This failed production line is paralleled with footage of individual accounts of workers from ‘Amazon Mechanical Turk’ (AMT), the e-commerce company Amazon.com’s labour-crowdsourcing marketplace. At AMT hiring a worker is as transactional as buying a printer.

In the video installation, the workers are confined to individual screens, in their individual homes, sometimes engaging with one another but always remote. They account stories of their employment, each required to complete ‘human interaction tests’ in order to train artificial intelligence algorithms. Completing a role that will eventually assist in their own obsolescence, they answer questions to enable computers to accurately mimic human interaction. Consequently and echoing the revolt in Fordlandia, the workers become increasingly frustrated. Vines creep in and insects buzz around them. They bat them away with rolled-up newspapers. Are the workers rebelling or becoming defunct, grown over? It’s hard to tell.

Often, Amazon sits between reality and a sort of collective hallucination – this liminal space reflecting the almost-human computer software the workers are developing. A heavy combination of surreal and sinister, Dean’s work draws you in and keeps you focused until the end. It is a deeply concerning exploration into our capitalist futures and very real present, where workers are increasingly alienated and mechanised. The only hope is radical action, letting nature reinhabit the factory.

ART NOW: Danielle Dean, ‘Amazon’ is showing at Tate Britain until 8th May 2022. It is free to enter and was curated by Nathan Ladd, Assistant Curator of Contemporary Art, Tate.