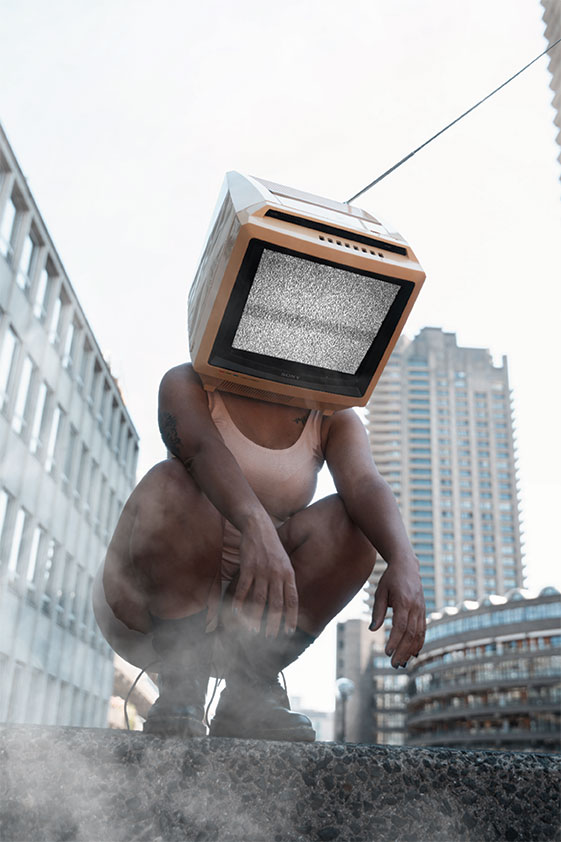 In collaboration with The Place and DanceXchange, the ‘Artists 4 Artists’ double bill featuring O’Driscoll Collective and Yami Löfvenberg was featured for one night only. O’Driscoll Collective was founded by Jamaal O’Driscoll who has been active in the dance community since 2010. He specializes in developing strong techniques within the hip-hop style of breaking. Yami Löfvenberg is a multidisciplinary artist and dance theatre director who often tackles difficult and hard-hitting subjects through the style of hip hop. Her work uses emotional autobiographical storytelling through a darkly comedic lens to educate the viewers on the realities of being a transracial adoptee.

‘Crabs in a Barrel’ was the first feature of the evening. Before even entering the theatre the audience was surprised by a spoken word piece by Sipho Eric Ndlovu performed at the reception point. It promptly ended as he walked through the room, opened the doors to the theater as if inviting us in and shut the door behind him. It left the audience excited for more. As I entered the theatre the stage was dark except for a singular dangling light bulb. In the low light, a man was skipping rope continuously even after the crowd settled. It filled the room with awkward suspense and curiosity. I knew everyone was wondering what was going on and what would happen next. As the show began we were introduced to the five performers through beautiful organic dance sequences. They effortlessly threw themselves across the stage through simple yet dramatic lighting and fog. The lighting design by Ali Hunter particularly stood out throughout the entire production. It was elegant and dramatic. Through its simplicity, it created a visually stimulating accent for the performers without taking attention away from them. It made an undecorated stage multi-dimensional and captivating. It was the perfect accompaniment to the soundtrack and dancers while creating a moody ambiance.

The integration of the hip-hop style of breaking kept the show extremely exciting. The contrast between organic interpretive dance and bursts of energy through breaking was balanced and captivated the audience. The bespoke sound score which was made through interviews with black creatives and booming hip hop beats helped tell the story of toxic masculinity, stereotypes and disruption. These themes were explored symbolically throughout the production through the vulnerability displayed by the all-male cast. Many scenes depicted the dancers falling on each other, dragging one another down to then be picked up by someone else almost in an endless loop. Repetition of these movements was used heavily, which could mirror the title ‘Crabs in a Barre’. When crabs are trapped in a bucket any crab can easily escape, but the others will always try to pull it down, ensuring the group’s collective demise. This expression refers to the human behavior of reducing the ego of someone who achieves success beyond others in order to sabotage them.

Yami Löfvenberg’s one-woman production ‘Happyendingfication’ was the second show in the double bill. The autobiographical piece explored the personal story of being a transracial adoptee and growing up experiencing racism and navigating the emotions connected to this. We follow Löfvenberg through youth, trying to understand her identity and relationships. The show began with the increasing sound of TV static. At its precipice she burst into an explosion of dance, fully immersing the audience into the chaos of her mind. Throughout the performance, Löfvenberg spoke directly to the audience creating an overwhelming sensation of intimacy. She explored various styles of dance, music and costume representing her mixed background. With powerful monologues expressing her experiences with racism and deep emotional distress, her uncensored voice uncovered the marginalized conversations surrounding the lifelong impacts of being a transracial adoptee. Throughout the emotional performance, there were many points of comic relief which successfully added light moments to such an impassioned performance. Löfvenberg’s solo performance was extremely raw and intimate, yet hilarious and full of explosive and colorful dance scenes that filled the stage to the brim.

The Place and DanceXchange’s Artists 4 Artists double bill featuring O’Driscoll Collective’s ‘Crabs in a Barrel’ and Yami Löfvenberg’s ‘Happyendingfication’ was a beautiful combination of performances. With contrasting moods and aesthetics the productions complemented each other and brought important conversations surrounding toxic masculinity, identity, racism and navigating emotions to light.