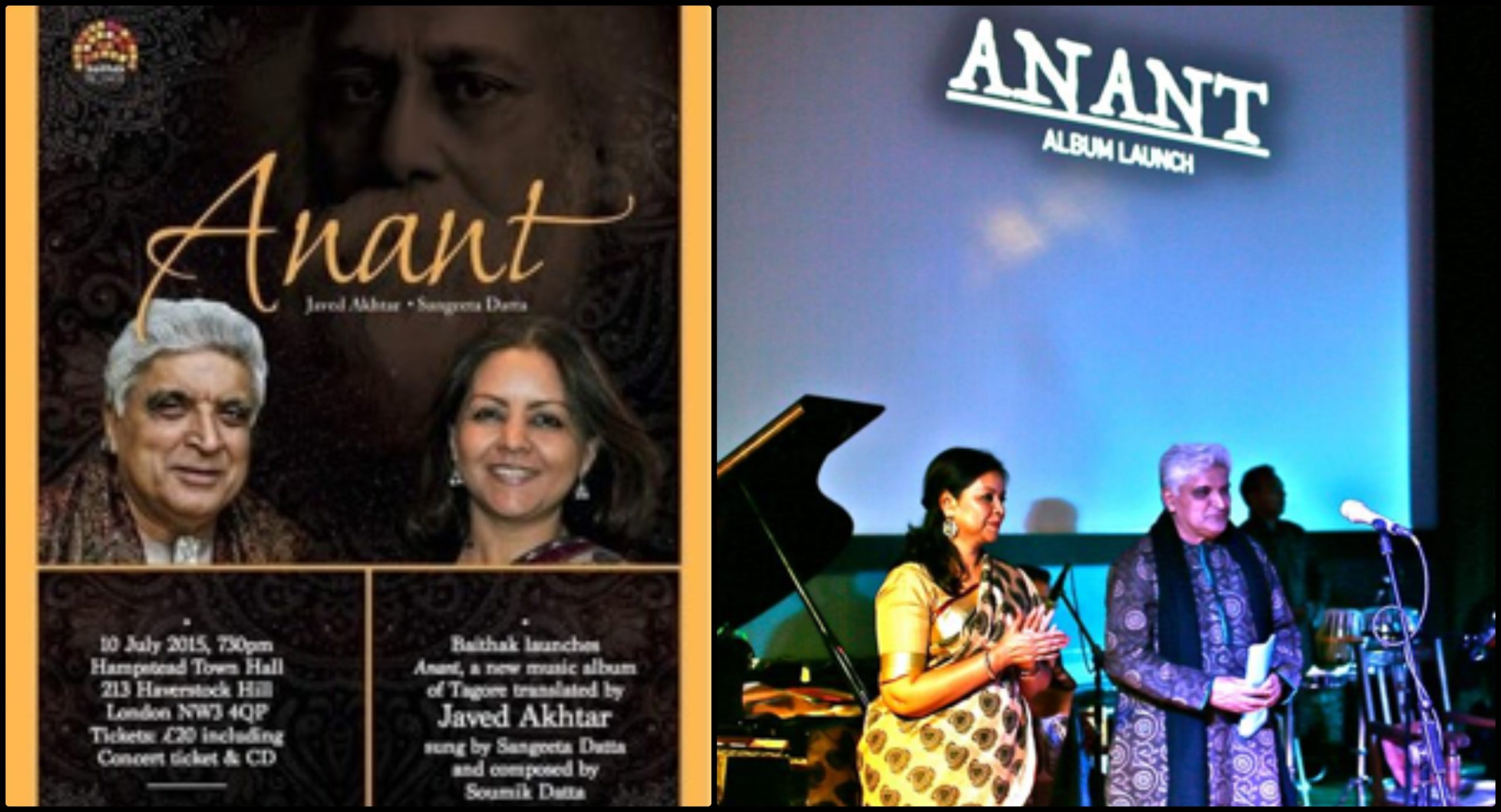 Poetry is essentially intranslable. Poems carry with them words which are rooted in a culture, language and history. Rabindra Nath’s Nobel prize winning “song offering” (Geetanjali) was more of a transcreation and not a translation as the poet himself modestly admitted to the limitations of transposing his deeply Indian spiritual work into a foreign language.

Bengalis have drunk deep from the bottomless fountain that is Tagore, but are very often at a loss to describe to a non bengali speaker how this superhuman’s body of work can pervade every aspect of a people’s thinking, dreaming, living, loving and dying.

Hindi is spoken by the vast majority of people in the Indian sub continent but it is perhaps safe to say that till date Tagore’s poems have not been able to capture their imagination.

Sangeeta Datta with the masterstroke of collaborating with Javed Akhtar, one of India’s most talented contemporary poet, lyricist and script writer has taken a few bold steps in the direction of opening up Tagore to a large section of the Hindi speaking population.

Anant is a music album of 8 Tagore songs transcreated into Hindi by the phenomenal Indian poet, Javed Akhtar. These are well known songs often heard in cultural programmes and preferred by leading exponents of Rabindra Sangeet and Tagore lovers.

Akhtar has done an impossible job, placing hindi words which capture very nearly the same emotion and evokes memories in most of the songs.

For instance the love lorn  storm tossed spirit in ” Aji jhorer ratay tomar abhishaar” (“my dearest friend, for your tryst you have chosen this stormy night”) is rendered in Hindi as “Ghan ghor Barkha ki hai yeh Raina”

For the launch event Akhtar read his poems and talked about the process of translation. Sangeeta Datta sang with a live band including some of the musicians who feature on the album. At a point during the course of the evening when Akhtar read his lines I closed my eyes and soaked myself in the words that flowed, the music that blanket them, the melody which drifted along and vocals that preceded and followed-totally immersed in the transcendental moment that it created.

While the transcreation was beautiful, the songs were set to music compositions by Soumik Datta in  his unique signature style- a rich fusion of Indian and western instruments joining together with the melodious Rabindra Sangeet renditions of Sangeeta Datta and Chiranjeeb Chakraborty into a harmonious whole

Soumik stays true to the soul of the original melody of the songs while bringing in a fresh and revitalizing perspective into his compositions which is a welcome change to the sometimes dour and doctrinaire interpretations that Rabindra Sangeet listeners are subjected to.

It is amazing how the master’s work in a different language, how the master’s melody in contemporary compositions and how the conventional songs sung with a different touch could effortlessly mingle and play to create a soundscape that is rooted and fresh. An approach that can attract younger generations to take greater interest in Tagore.

Making his music more accessible to today’s generation is arduous. The task of making Tagore available in Hindi is vast and even more challenging. Baithak has taken on this dual challenge and succeeded. We wish to see more such collaborations in the future with equally beautiful results.