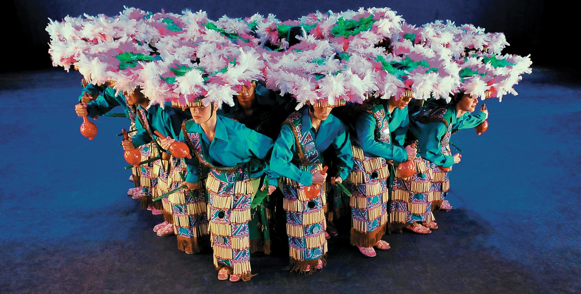 Ballet Folklorico De Mexico brings a mesmerising presentation of colours, rhythm and rituals of Mexico. It beautifully captures the essence of the  Mexican spirit-a living culture steeped with ancient history.

Established in 1952 by Amalia Hernandez Navarro from Mexico city, the company continues its work of presenting the life and spirit of the Mexican people, their beliefs, rituals and ways of life through movement, dance and music. The style has evolved over the years, and has been reworked to keep up with the times. The style traces its history to the  pre-Colombian civilizations, through the Hispanic influences of the colonial era up to the Revolutionary years of the early 20th century – through the expressive form of folkloric dance.

The presentation consisted of 9 dances which came in varied shades of colour. The opening piece “Los Matachines” dance is from Northern Mexico based on a scene of war. 18 dancers wearing large head gears more like sombrero hats exude  vigour and strength through physicality and extreme masculine movement.

The following dances portrayed a typical hispanic flamboyance of social dancing with gentle hip sways and shoulder shakes of women in long twirling skirts and men in colourful suits. The symbols of latin American dance – fans, scarfs and high heels propped these pieces, bearing a very subtle style which is the signature of the company. With restrained movements the dances carried an undertone of sophistication in their execution. Each choreography used a  magical number multiplication technique with gradually increasing number of dancers on stage creating a beautiful effect. Frequent entrances and exits by the forty dancers and the immaculately choreographed line pattern changes took a clever turn in seemingly increasing magnitude and volume.

The Deer Dance stands out due to it’s contrast in numbers and setting. A male deer tries desperately to save himself as he  is pursued by a group of hunters. A simple theme brilliantly choreographed and danced with precision. The agility and convincing imitation of the male deer in its attempt to fight the hunters magically transports the audience to the woods for a few minutes. You snap out only when the deer lies wounded on the floor.

This charming performance marks a successful celebration of the year of Mexico in the UK. The confluence of colourful and flamboyant costumes, beautiful choreography of large numbers of dancers and traditional  live music make it a grand spectacle.