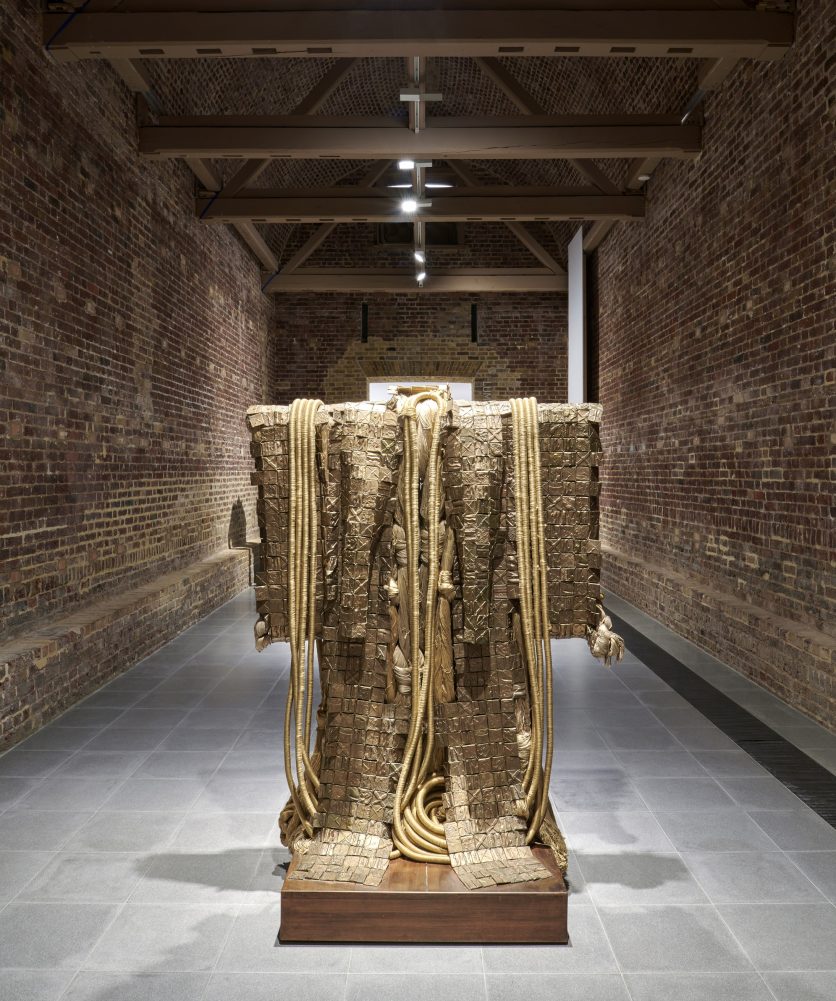 This Autumn, Serpentine opens Infinite Folds, the first UK solo exhibition of artist, novelist and poet Barbara Chase-Riboud. The exhibition is an in-depth exploration of the artist’s practice, presented chronologically from the 1950’s to the present day.

One of the first works on display is Adam and Eve, 1958, a striking bronze sculpture. A rarity, as Infinite Folds sees the first public display of this piece. The work features two abstract figures embracing beneath a tree – thin limbs and textured metal reminiscent of a Giacometti. Here, we see Chase-Riboud’s early experimentation with technique and materiality. As the exhibition continues, the works chart the progression of her own signature style. Rope, metal, knots and braids are all manipulated in mesmerising ways.

As well as an innovative artistic practice, Chase-Riboud is an accomplished poet and historical fiction writer. In her own words,  poetry is “very close to a discipline both familiar and dear to me: drawing. Both are dangerous searches for perfection…drawings prepared me for the demands of poetry”. Her first novel, Sally Hemings, published in 1979 gained notoriety for exploring the relationship between the enslaved woman, Sally Hemings and US President Thomas Jefferson. She has since published over ten texts, with some also adapted for film and television.

In Infinite Folds, we see Barbara Chase-Riboud’s literary work convene with her artistic practice. Historical figures, legacy and power are recurring themes. Chase-Riboud’s widely celebrated sculptures from the series The Malcolm X Steles, take centre stage. The works – monochrome arrangements of sculpted bronze and braided fibres – are dedicated to the human rights activist who was assassinated in 1965. Of the series, Chase-Riboud says, “What they do is embody the spirituality of Malcolm, without having to depict him as a person”. Many of Chase-Riboud’s works explore figures under or misrepresented throughout history. Together they stand like monuments in Serpentine’s white-walled gallery spaces.

Infinite Folds is a fascinating and comprehensive presentation of Barbara Chase-Riboud’s practice and one that is very much overdue.

Barbara Chase-Riboud: Infinite Folds is showing at Serpentine North Gallery until 29 January 2023. It is free to attend and more information is available here.

Review by Amy Melling: Amy is a Curator and Creative Producer whose practice is centred around community-led arts projects. Her current research is focused on curatorial methods for exhibiting artworks outside. Amy has a keen interest in the arts and recently completed an MA in Curating and Collections at Chelsea College of Arts, UAL.