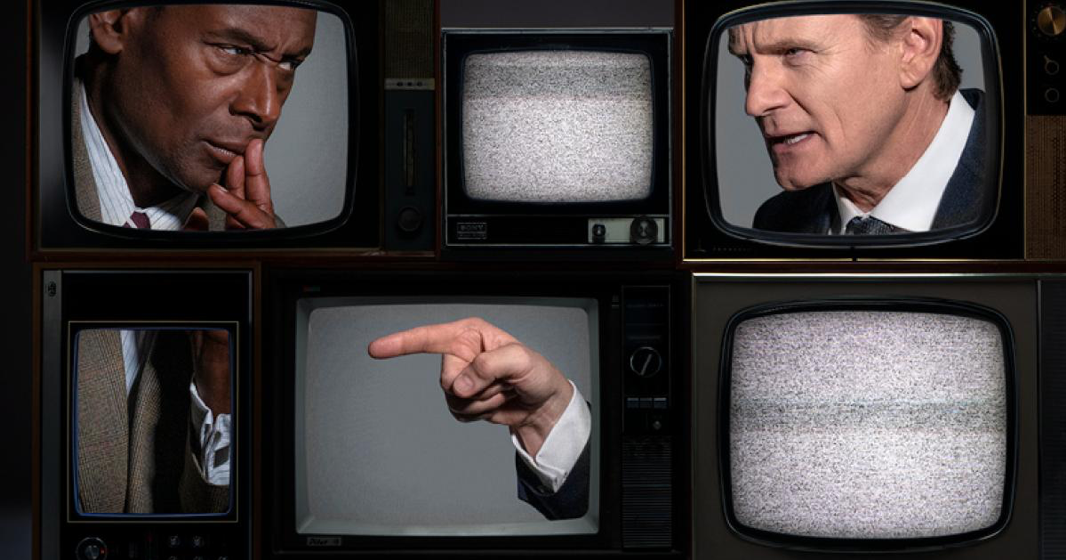 The tempestuous American 1960s are currently being brought to stage in the new play “Best of Enemies”, at the Young Vic theatre. Written by James Graham and directed by Jeremy Herrin the story is based on the documentary of the same name by Norman Neville and Robert Gordon. It explores a historical televised debate at the heart of the explosive year 1968 in the USA.

The play opens with two exasperated men who seem to have lost all control as they insult each other with no retain, and slurs such as “queer” and “crypto-nazi” fly across the room. We are witnessing the aftermaths of the televised debate between the two intellectuals William F. Buckley Jr. and Gore Vidal, who both seem extenuated from their clash. Suddenly, the play rewinds to the beginning of the story to give us more context: we are in the US of 1968, where a wind of change and chaos is taking America by storm. The protests against the Vietnam war, the assassinations of Andy Warhol and President Kennedy, the open wound of segregation: all these crises are cleverly conveyed through a sequence of lights, audio and video projections of television broadcast, respectively designed by Parle Constable, Tom Gibbons and Luke Halls. We are transported to the studios of ABC TV News who, desperate about their low ratings, decide to air a discussion between two famous intellectuals about the feisty presidential debate of Frost against Nixon. They decide to invite the conservative William F Buckley and the liberal Gore Vidal, who both agree to participate out of personal interest to increase their fame. After all, “a man should never turn down two things. Sex, and appearing on television”. The debate is indeed set up from the start as being a product of greediness more than genuine concern about political issues, both from the television studios and from the two men.

As the debate begins, we start to identify the different characteristics of the two men, who are two opposite poles in every aspect. Buckley is an extreme-right conservative with extremely homophobic and racist opinions, whose passion and feistiness are depicted to perfection by British actor David Harewood. It would be easy for such a character to slip into the role of the “bad guy” of the story, and yet the script and Harewood’s performance manage to give him, if not likeability, some sort of relatability. His intellectual torment, the facial tics and physical insecurities that he portrays and the domestic scenes with his wife make him an extremely complex and full-fleshed man. Vidal (Charles Edwards), on the other side, is a more superficial character who seems less politically passionate than Buckley, but his quick wits and charms help him dominate the debate most of the time. His sense of superiority is quite unnerving but gives him a charisma that plays to his advantage.

Apart from snippets of the personal lives of the two protagonists, such as Vidal’s queer flings and Buckley’s conversations with his wife, the play revolves mostly around the debate. As such, it could have risked being an overly political two-hour conversation, no different from what one could find by tuning in on a typical political TV programme. However, Graham manages to craft a story that surpasses the debate and considers a much wider range of themes. In fact, the debate soon drifts away from politics to become a mere combat of peacocks, as the two men try to outwit the other and appear as the most brilliant one. As is often the case in politics, we tend to not root for the man with the best policies, but for the man that we like the most. We slowly see what is supposed to be an enriching exchange of opinions between intellectuals, become an arena where the combatants will face each other until death.

The play offers countless reflections on many different subjects, such as the transformation of the role of TV in society or the birth of polarisation between different parties and communities. These ambitious contemplations provide an intellectually rich aspect to the play, which is reinforced by the detailed historical accuracy. Every historical character is staged realistically, and actors Charles Edwards and David Harewood have clearly been studying every mimic and mannerism of their characters, which they both reproduce convincingly.

The play has unfortunately been suspended until January 3rd due to Covid but will be broadcasted online until then. Since the live play tries to reproduce the feeling of watching TV, watching it as a video can be an interesting experience that could enrich the narrative. Get your tickets at  https://www.youngvic.org/whats-on/best-of-enemies