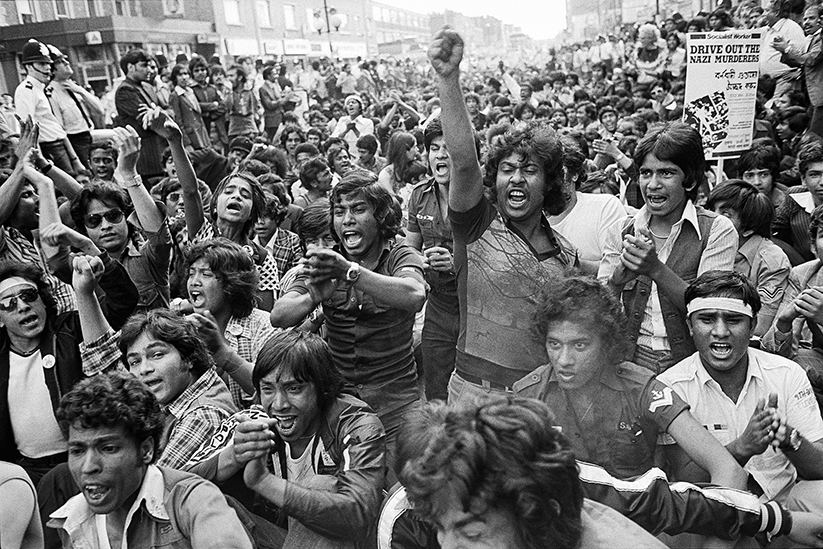 Four Corners Gallery, in the heart of Bethnal Green, is a hidden gem amidst East London’s cultural scene. The gallery exhibits radical photography and film, produced for and by the local community. June 9th saw the opening night of Four Corners’ latest exhibition, which focuses on the daily experiences and political resistance of the Bengali community in and around Brick Lane during the 1970s. Paul Trevor’s photography is viscerally moving, eliciting the sheer volume and strength of the British-Bengali community that took to the streets in order to protest white British racism. Trevor’s work constitutes a valuable archive of political defiance, highlighting the agency of one of London’s most underprivileged and under-resourced communities despite everyday derogation.

The exhibition is but one part of a wider project, a partnership between Four Corners and the Swadhinata Trust, that has been documenting Bengali activism in the East End over the last 18 months. The oral histories, short films and podcasts produced by this collaborative effort will be permanently lodged at the Bishopsgate Institute. Even in attending the exhibition’s opening night, it was clear to me that the shockwaves cultivated by this project will far exceed the intimate space of the Four Corners gallery. I was overwhelmed by the feeling that in viewing Trevor’s work, I was actually being offered a glimpse into a suppressed and undercelebrated history. From the perspective of a second-generation South Asian immigrant like myself, the personal stories hinted at in Trevor’s photographs are intensely humbling and indeed inextricable from family histories like mine. Racism and discrimination were and are deeply entrenched in the lives of South Asian immigrants who came to Britain in the twentieth-century; and yet here, in these photos, there is a dynamism throbbing across the multitudes that have gathered. Of course, there is grief and anger in the slogans raised above the crowd; but there is also an incredible, palpitating pride.

South Asian immigrants are often depicted as a model minority group: we work hard, play by the rules, and assimilate without fuss. This is not the story told by this exhibition. After 24-year-old Altab Ali was murdered by three white youths near Brick Lane, thousands of Bengalis marched behind his hearse from Whitechapel to Hyde Park to Downing Street. Banners profess the intentions of the Bengali Youth Movement Against Racism to ensure that Ali’s murderers be held accountable. The campaign did not falter throughout the summer of ’78, despite the violent efforts of the National Front to curb the movement. By 1980, the National Front was actually forced to move its headquarters from nearby Hoxton.  That year, 16 separate Bengali youth movements formed a coalition called the Federation of Bangladeshi Youth Organisations. By 1982, the first few Bengalis were elected to local council.

My experience of the exhibition is inextricable from the scenes I witnessed on the opening night. Many of the men and women in Trevor’s photographs came for the evening party in the gallery; some had not seen each other for the forty years that have passed since the Battle of Brick Lane. Locals were identifying themselves in the huge black-and-white photographs, getting teenage grandchildren to take pictures of them standing proud next to images of their younger selves. In conversations with some of the Bengali people who partook in the demonstrations of ’78, many professed that they had no idea, back then, that their movement would go down in the annals of history. They had simply, one man told me, had enough.

Brick Lane: The Turning Point is on at Four Corners until 10 September. It is free and no booking is required. https://www.fourcornersfilm.co.uk/whats-on/brick-lane-1978-the-turning-point-1