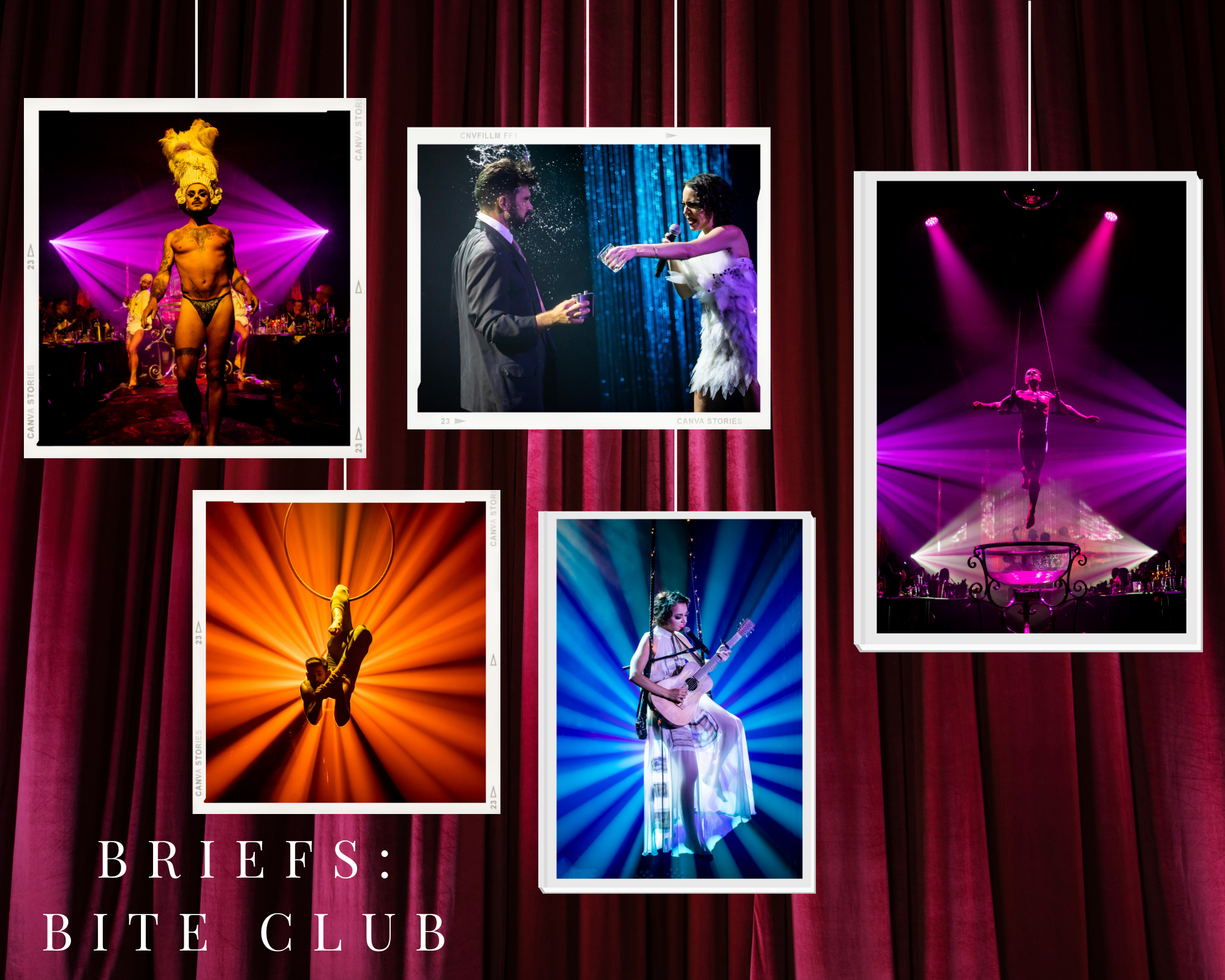 After a three-year absence, Briefs, a cabaret company based in Brisbane, has come to The Southbank Centre’s Queen Elizabeth Hall in the wake of a headline slot at The Circus Tent at Glastonbury and in advance of a run at Edinburgh’s Fringe. Compèred by co-creator Fez Faanana under the guise of gender-bending Shivannah, the provocatively named Bite Club is the latest instalment of their flagship show, soundtracked by vocalist Sahara Beck and a live band performing entirely original music.

One factor that is partially out of control in every cabaret show is the enthusiasm of the audience. Some of that enthusiasm is down to the quality of the performers and the strength of the performances, but to some degree, it is down to the assortment of individual bums in chairs. Fortunately, the crowd was great, and the performances and performers were excellent. Shivannah is a captivating host, who drags you into the act almost instantly. The only unfortunate fault was the acoustics of the hall – it was often hard to hear what she was saying.

Bite Club is, of course, very camp, and many of the segments were simply but ingeniously devised. In one, a man in various garish outfits does all he can to grab the attention of Beck, who repeatedly bats him off as she sings. He slowly strips until he’s covered only by a towel, which doesn’t take long to fall. In another, Mark ‘Captain Kidd’ Winmill – 2011’s Las Vegas King of Burlesque, they’ll have you know – delivers an exceptional show on a swing with a birdbath. He’s also utterly ripped and has great outfits.

When practicing an art form like cabaret, which sits at the intersection of the carnal and the carnivalesque, the executive choice on whether to mention COVID-19 can be a tough one. On the one hand, the escapism can feel blunted without the eponymous sense of escape; on the other, trying to escape the pandemic feels slightly futile. It would be a bit like walking around any naval town in June 1945, pointing to the beauty of the sea and knowing that behind you stand ruins. But Shivannah navigated this well, acknowledging the elephant in the room sparingly as a necessary evil.

On one occasion, though, Shivannah ushered in a more sombre moment with reference to the pandemic, and the stage cleared for a solo performance by Beck. A segment dedicated wholly to singing is welcome but is less impactful when no one knows the songs. Ironically, in all other instances, the original music marked out the cabaret. Beck is both a fantastic vocalist and a versatile songwriter, in addition to being a natural showperson.

Perhaps at The Southbank Centre’s Queen Elizabeth Hall at 7:30pm, it wasn’t best placed to shine as it should. Furthermore, Winmill, Faanana, and Beck could reconsider a mix of original songs which sit in the background and camp classics to take centre stage. But Briefs: Bite Club is a great show, and it will no doubt see some success at the Fringe—preferably later in the evening after a few more drinks.

Reviewed by Cian Kinsella-Cian is a Classics teacher and part-time pub quizmaster living in London who is primarily interested in music but is also interested in theatre, literature, and visual arts. He is particularly intrigued by the relationship between art, criticism, and the capital forces always at play. Furthermore, he believes that subjectivity – which is ultimately at the heart of all artistic and cultural criticism – should not be concealed, but probed and perhaps even celebrated. Who decides what we like? How do they construct widely held beliefs about what is good? These are two of the questions Cian looks to address.