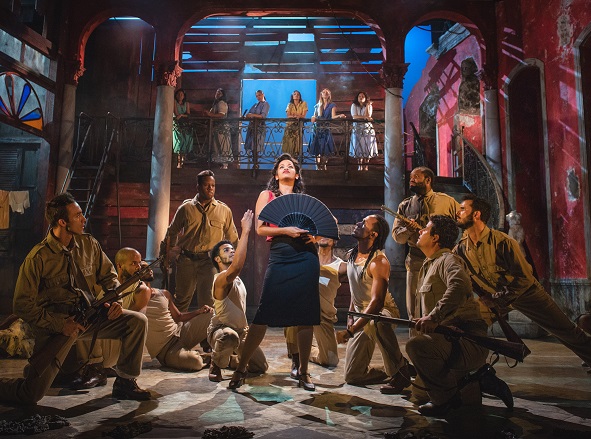 Inspired by Georges Bizet’s Carmen,  Christopher Renshaw’s adaptation “Carmen La Cubana “is a heady mix of Cuban panache, warmth and vibrance. Set in pre-revolutionary Cuba in 1958 Carmen is a story of fierce passion. It is set on the edges of an emotional rollercoaster and political unrest where Jose kills for love and Carmen embraces death. Through Cuban dance and its seductive rhythms, the story of Carmen and Jose also unfolds a parallel story, portraying the cultural and political scene of the time.

Cuban dance never fails to engage its audience with its raw energy and spirited music. The imposing set reveals a Cuban neighbourhood with its dilapidated Baroque architecture, sweltering streets bubbling with trendy dancers, transporting you to the island of the Habaneros. The performance sets off with the storyteller with her folklores and tales that have shaped Cuba’s history and tradition. She tells her story in her deep voice gradually unfolding carmen’s story in different avatars. She introduces the audience to the characters and connects the scenes leading the audience through the story. Albita Rodriguez playing this character of La Senora is the backbone of the show. She is the voice of the performers and the director bringing it all together with her fierce performance.

Luna Manzanares Nardo as Carmen has a blazing presence in every scene. Carmen is an epitome of sensuous desire and free spirit-a rebellious and fearless non-conformist. She lives life on her own terms and challenges men with her mysterious sensuality. Nardo’s voice, appearance and performance rounds it all up to give us a phenomenal Carmen. Set against Carmen’s fiery demeanour is the calmer yet resilient soldier Jose (Saeed Mohamed Valdes). She covets him and seduces him into a love relationship. However her love is transient. She shifts her favours to another and ill treats Jose. Her passion is laced with a venomous bite and  bitterness. The different layers of Carmen’s personality is captured in a mature and gripping performance by Nardo.

The entire cast of very talented dancers and musicians have brought the Cuban spirit and culture alive in a 2 hours performance. Planting Bizet’s Carmen in Cuba adds some swagger to the production. Renshaw’s reflection of his experience in Cuba, unlike most visitors, is more intimate. His deeper understanding of its culture, spirit and noise with the underlying theme of political unrest and historical facts makes this a thoroughly enjoyable Cuban cultural product.