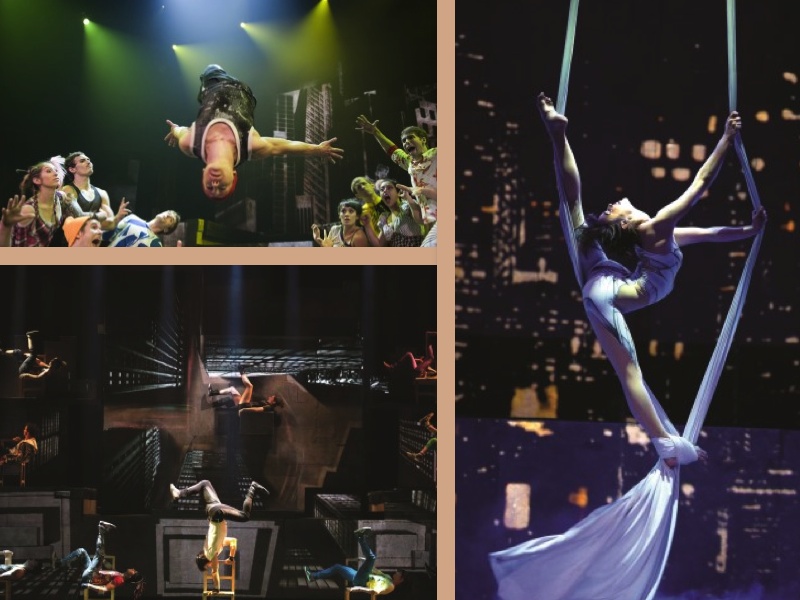 Cirque Eloize is contemporary circus meets west side story meets urban hip hop and break dancing. It’s placed in a futuristic cityscape partly derived from graffiti comics and science fiction where it strives to seek answers to the existential questions-where do I belong? How do I relate to my group? Who am I as an individual? Its exploration of the graffiti strewn skyscraper framed urban spaces populated by trendy young people poses interesting metaphors for city living.
Contortionists, Olympic gymnasts, jugglers, stunt bikers, in- line skaters, trampowall illusionists, break and hip hop dancers come together to create this intensely amazing city centre feeling. Office worker meets beautiful girl who is part of one of the warring gangs. The two gangs test each others mettle through a series of dazzling acts which culminate in the truly breathtaking 8 minute finale on the trampowall. On the way we meet a multi-talented cast who mesmerise the audience with some daredevil stunts. All of these is choreographed with contemporary urban dancing in the backdrop of futuristic city lights. There are several adrenalin soaked high points such as balancing on stacked up chairs, head standing dance moves, slipping down Chinese poles only to freeze before crashing to the ground , somersaulting on Cyr wheels or flying on aerial hoops. There are also more soul soothing lyrical moments created by the suspended female dancer with the in line skater.
ID directed by Jeannot Painchaud is a perfect amalgam of some breath-taking circus acts with theatre and acrobatic street dancing. In the end it’s a search for the urban soul which finds beauty and individual expression through street art and urban dancing. It’s a show which in this day of television and reality shows exposes you to the power of real time stage performance.
Protima Chatterjee
Catch our interview with Cirque Eloize below.