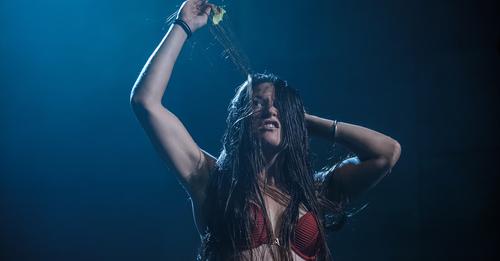 “Cockroach” is Jacksons Lane’s new show that ran on two consecutive nights on the 3rd and 4th of March. Chloe Mantripp’s one-woman show created a perfect mix of dance, music, acting and physical performance to build a hybrid form of storytelling that kept the audience invested throughout. It felt less like a monologue and more like a conversation that the character was having with us, whilst nonchalantly brushing her teeth or doing her hair. With her seemingly careless and ironical tone, she addresses a range of subjects going from complex socio-political subjects to deeply psychological themes.

Our heroine is a prostitute with a gritty sense of humour who welcomes us in what seems to be her home. Half-woman, half-insect, repugnant yet seductive in her red underwear set: we are conflicted on whether we are repelled or intrigued. We are put in front of a particular segment of our society, where a living being is used and forgotten by everyone and is condemned to rot in filth like a literal cockroach. Mantripp flirts with the limits of the disgusting and uses it as a shock factor, as she pulls a used condom out of her hair, pours shampoo directly into her eye and happily rolls in the dirt. However, the character is still somehow endearing, as her cheerfulness, humour and simplicity add a light-hearted appeal to the play.

The expressivity of Mantripp’s performance principally comes from the extreme physicality and energy that she showcased. Her narration was punctuated by energetic dances, acting bits, impressive physical stunts and an extremely touching final hair hang performance, hair hang being a form of aerial dance where the performer is hung by their hair. This performative aspect of the play has to do with Jacksons Lane’s role as the leading supporter of contemporary circus in the UK. The character could be summed up as a sort of sad clown that juggles between the pathetic, the tragic and the whimsical.

Mantripp’s performance carried the show from start to finish engaging its audience in the exploration of the journeys of the abandoned and the neglected.