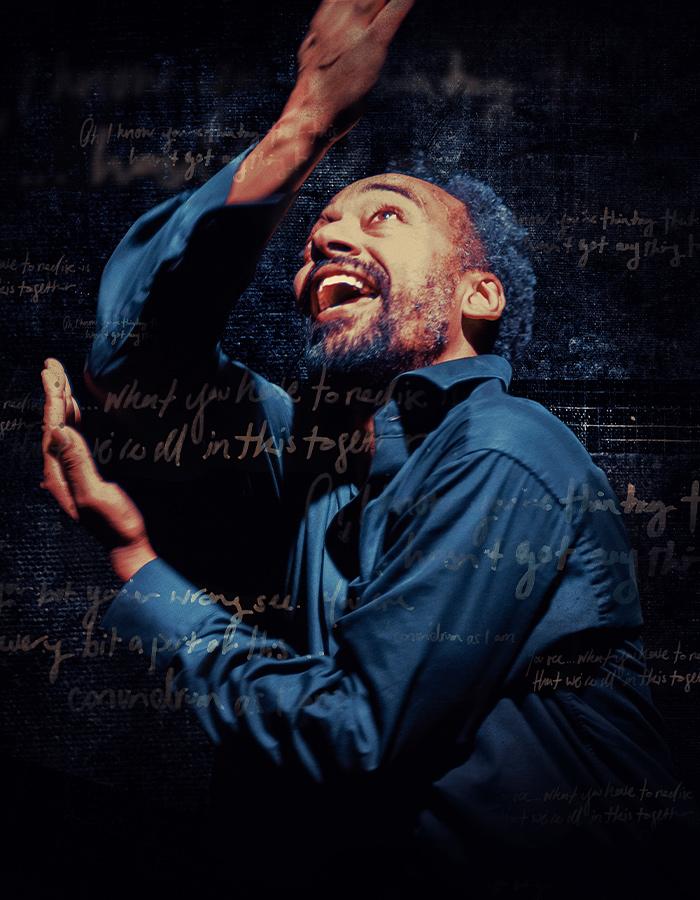 Fidel stands in the middle of his memories, attacked by the voices putting him down, he struggles to find his way towards self-acceptance. Conundrum is a one-man show written and directed by Paul Anthony Morris. This psychological drama stars Anthony Ofoegbu as Fidel, a man who, while tidying his house, encounters his old diary. Opening his Pandora’s box brought him back to his childhood and to the trauma he suffered. We follow him as he undergoes a psychological fight against his old demons, trying to figure out why it did not work out as he had hoped. Fidel was a genius child who received contradictory information. His mother told him that he was a child prodigy while his teacher and friends treated him differently: ‘be 10 times better than the other child’; ‘no more lofty ideas’. In the middle of the stage was drawn out a blackboard with sentences scribbled on it with chalk. Within the confines of it, we discover a lost child who does not understand what society is expecting from him. We see Fidel struggling with his emotions and searching for self-identity through the act. We follow him on his journey in which he tries to piece together where it all went wrong.

This performance looks deeply into the consequences of systemic racism on children and how hard it can be for a child to face those incomprehensive barriers. The child’s emotions are fully taken into account, showing his endeavour to fight back the things that prejudiced adults said to him. Fidel shares with his audience those memories from the past that have now come back to haunt him. The main focus of this drama is based on the psychological struggle of Fidel and steers away from developing into a layered narrative. Anthony Ofoegbu excels in emoting his psychological struggle and keeps his audience captivated even without multiple layers developing in the narrative. Fidel questioning his past and trying to find answers through his personal journey is the central theme and the entire act spirals around it without much forward movement. Fidel’s emotional journey dominates the context. It would be interesting to go further with him to understand how in the end he moves on from the spot he was in.

Conundrum is a psychological drama about one man’s struggle to overcome society’s stereotypes and oppression. It will run until February 4th 2022 at the Young Vic, in Waterloo, London.

Reviewed by Alix Berthelot–Moritz. Alix is a volunteer writer for Abundant Art. Originally from Normandy, France, she follows her passion for journalism and art by studying at the European Political and Social Sciences of UCL, London. As an international student living in London, she is determined to fully experience and discover the entirety of the city’s vibrant arts scene and share the beauty of it through her writing.