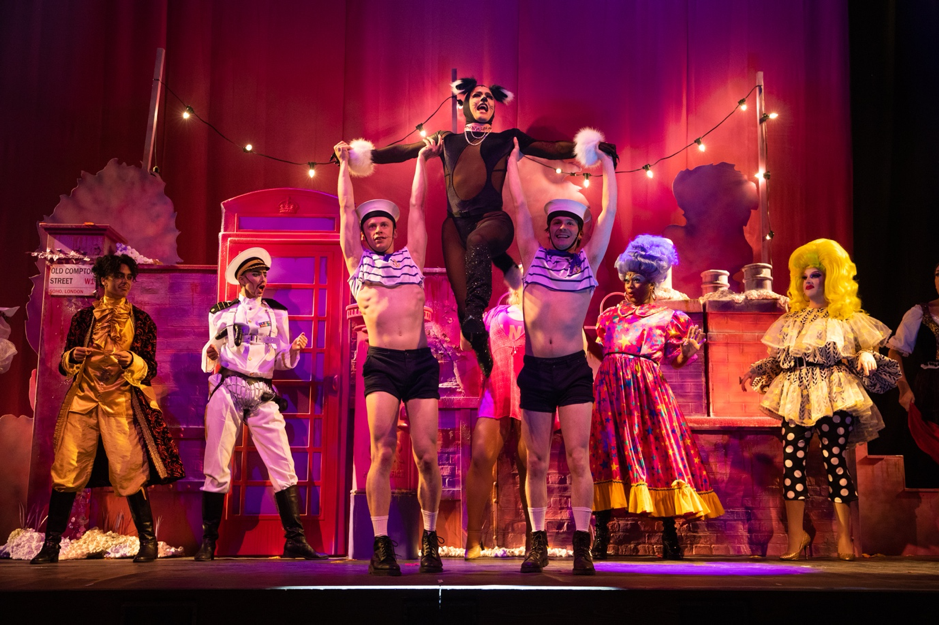 This Christmas, get ready for flamboyant costumes, glitter, and cheeky humour at the Phoenix theatre with the fabulous all-Drag Christmas Pantomime “Dick Whittington”. Written by Gareth Joyner and directed by Chris Clegg, the show puts on stage world-famous Drag Queens and Kings in a remake of the tale “Dick Whittington and his cat” for an extravagant and fun show that will add a dose of glee and sparks to your holidays.

The story is set in Soho where the evil Queen Rat (Choriza May) is threatening to unleash her army of rodents, to the sorrow of the magical Spirit of Soho (Kitty Scott Claus). Fortunately, the valorous Dick Whittington (Cheryl Hole) and his cynical cat (Elektra Fence) arrive in town not only to save the day, but also to discover new friendships and blooming love. However, as even the characters point out, the plot is the least interesting element of the play: the music, costumes, dance performances and most importantly the Queens and Kings are the real protagonists of the stage. The fame of the cast precedes them as everyone receives a loud cheer every single time they show up on stage. This was all at the amusement of Cheryl Hole, who asked the audience to calm down if they wanted to keep watching the story.

Occasionally breaking a scene for a laugh, or just pretending that they had forgotten their lines for some more humour, the cast manages to keep the audience on their side with their impressive talent of improvisation. They showcase a natural charisma that goes beyond the script. Cheryl Hole is a great protagonist as “a boy dressed as a girl dressed as a boy” and plays her character with confidence and magnetism. Elektra Fence the sarcastic Cat (my personal favourite) is incredibly hilarious and constantly breaks the fourth wall, despite forgetting her lines every so often. Kitty Scott Claus is also brilliant as the Spirit of Soho, as is her rivalry with Choriza May’s Queen Rat. Yshee Black as Dame Sarah is full of energy and glee for her first-ever theatre performance, and Karen has an exhilarating dynamic with Dick in their “heteronormative boy and girl love story”. The Drag Kings Beau Jangles and Richard Energy are also remarkable, and Beau Jangle’s theatrical performance of Cardi B’s “WAP” is as talented as it is absurd. Finally, Ophelia Love has the role of “Villager number 4”, a role so insignificant that she comically overplays every single one of her lines and interrupts the story to do some self-promotion.

The play is dominated by a dimension of self-irony and satire with over-the-top humour that has the audiences laugh from start to finish. The pop-culture references are endless and Drag fans will be satisfied no doubt. Musical bits such as Choriza May’s “My pussy is like a peach” and Ophelia love’s “My heart will go on” were both funny and spectacular. The most memorable one is the rendering of “12 days of Christmas”, where the cast has to run around and open boxes in an impossible choreography that has them slipping on the floor and banging into each other. The immersive dimension of spark and colourfulness is also perfectly conveyed through the extravagant costumes and the simple but effective set design (designed by Justin Williams). It all resulted in a perfect mix of Drag extravaganza and theatre with a cast that owned the room from start to finish.

Sprinkled with Drag magic, Dick Whittington is running throughout the holidays, get your tickets at https://www.thephoenixtheatre.co.uk/dick-whittington.