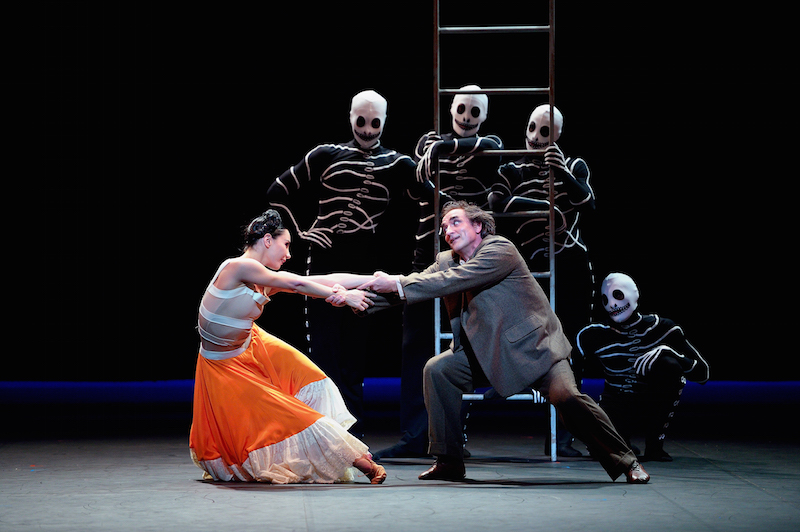 There was a huge amount of buzz created in the world of dance and social media in the lead up to She Said’s opening night. This may have been fuelled by the recent heated argument regarding the lack of female choreographers at the top of the dance industry. Tamara Rojo, who as Artistic Director of the English National Ballet made this programme of dance possible, this makes the point that ‘in 20 years of being a professional dancer, she had never performed in a ballet made by a woman.’ An interesting statistic to start the evening.
The triple bill consisted of Broken Wings by Annabelle Lopez Ochoa. This narrative driven piece depicting the life of Frida Kahlo was a colourful feast for the eyes. Rojo played the character of Frida from the young, carefree teenager, and into the tragic accident that lead Kahlo to her paintings. The stage was filled with characters straight from the canvases of Kahlo’s work. Skeletons, dressed in Day of the Dead Mexican costumes, accompanied deer, birds and monkeys. These skeletons physically manipulated Kahlo throughout the piece, including through a graphic scene portraying one of Kahlo’s miscarriages. The costumes were unforgettable, expertly in harmony with Lopez Ochoa’s choreography.
M-Dao by Yabin Wang also dealt with a narrative, this time the Greek story of Medea was the subject. Medea was exquisitely played by Lauretta Summerscales. The dramatic and tragic tale was helped along with some inventive set design. The white cloth sails that draped from the top of the stage drew a gasp from the audience as it cascaded like water down onto the floor. The whole piece was very tactile and emotive. The choreography was more centered in traditional ballet, which suited the ENB cast. The atmosphere, which was poignant throughout, finished on a very haunting note.
The evening finished with the very different Fantastic Beings by Aszure Barton. The interplay between the score by Mason Batest and the choreography was akin to watching Disney’s Fantasia. The dancers were able to physically visualize every instrument, every change in tone or pitch and rhythmic interplay. The large and anonymous cast were all dressed in slick Cunningham-esque body suits and performed to a backdrop of twinkly lights. The choreography was bold, vivacious and unpredictable.
One thing was very clear from the evening, all three of these choreographers and their works were deserving of their moment on the Sadlers Wells stage. I am really hoping that more of them, as well as other female choreographers, will be seen topping theatre bills.
Review by Sara Daniels
Photo: Tamara Rojo and Irek Mukhamedov in Broken Wings by Annabelle Lopez Ochoa (c) Laurent Liotardo