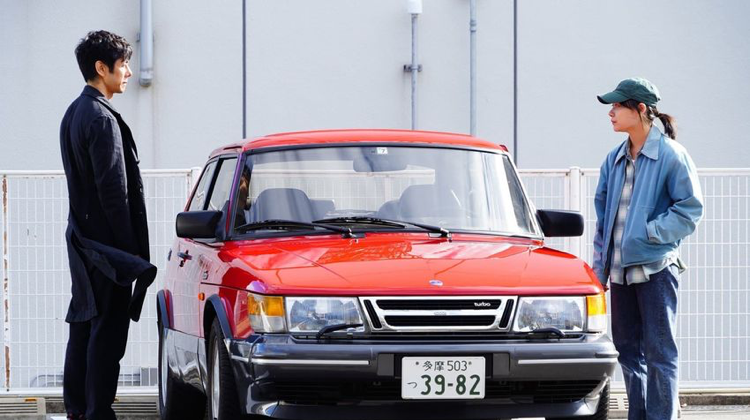 “And in the great beyond we’ll tell him that we cried, that we suffered, that life was hard.”  This sentence is from the play Uncle Vanya by Anton Chekhov. Protagonist Yûsuke is in charge of directing a theatre production of Uncle Vanya and this is a great embodiment of everything that Drive My Car is. The film is a tale of acknowledgment and acceptance of the abruptness of life, of the sadness, suffering and melancholy that living can bring. An adaptation of author Haruki Murakami’s book of the same name, Drive My Car, directed by Ryusuke Hamaguchi, it is a 3-hour long journey through the life of theatre director Yûsuke (played by Hidetoshi Nishijima). The film explores the grievances of his relationship with his finding peace and forgiveness within himself through conversations with others. Particularly with Misaki, a young woman assigned by the theatre agency as Yusuke’s personal driver, in charge of driving him around in his beloved scarlet red Saab 900.

The prologue of the film is dark and erotic, unlike the rest of it which mostly has a more tranquil feel. The film begins with Oto, a screenwriter who is also Yusuke’s wife. We see Yusuke having intercourse as Oto recites a story about a young girl who sneaks into the house of her unrequited crush. The intimacy and these stories serve as a re-connection for the pair after losing a child that caused pain and tension within their marriage. However, one evening on an unexpected return due to a cancelled work flight, Yusuke catches Oto cheating on him with popular notorious actor Koji. He watches blankly for a minute, before leaving quietly, unnoticed Yusuke later casts Koji as the lead in his production of Uncle Vanya.

His days are mostly the same, a long drive to work in which he plays a recording of Uncle Vanya voiced by Oto, reciting lines back, working on his play at the theatre, driving home and reciting the play with the recording once again, returning home to Oto, usually engaging in intercourse whilst she continues her story. Yusuke seems not to be miserable. Rather, just compliant with his life, numb to anything outside what he knows. He does enjoy driving, it’s soothing and serene for him, he uses it to unwind. In an attempt to avoid a conversation with Oto, as she insists, they need to talk after work, Yusuke takes a long drive before returning home. When he returns Oto is laid loosely on the floor, with no pulse. The doctor concluded that she suffered a cerebral haemorrhage and was dead on the scene. These events in the prologue are a catalyst to the themes explored through the film.

Drive My Car is slow-paced and introspective. There are several shots of the red Sabb 900 driving through the streets of Hiroshima, packed and empty, through the blue skies of the day and the serenity and darkness of the night, that present the meditative nature of the film. The dialogue that occurs between Yusuke and Oto, Misaki, Koji as well as other individuals within the vicinity of his car help to explore and overcome the pain Yusuke has held onto. Yusuke does not doubt that his wife loves him, despite her infidelity. He voices this to both Misaki as well as Koji. He also voices that this is why he chose to remain oblivious to it around her. The acknowledgment of her infidelity would result in a change of dynamics within their relationship. His refusal to face the situation prevented abnormality and inconsistency within their relationship. However, he blames this fear and complacency as reasons for Oto’s death –confessing he thinks perhaps if he didn’t take a longer drive to avoid their conversation, he could have made it back before her pulse stopped.  Misaki does not doubt that her mother loved her, despite the way she treated her.

The bonds and relationships we form with people in our lives are often based on our understanding and what we think we know about these people. But we can never really know everything about someone and why they do the things they do, no matter how much we love them or how much time we spend with them. Drive my car encourages us to embrace the fleeting and changing nature of our relationships as well as to not blame ourselves for the things we cannot change.

Book tickets to watch Drive My Car at the Institute of Contemporary Arts here: https://www.ica.art/films/drive-my-car