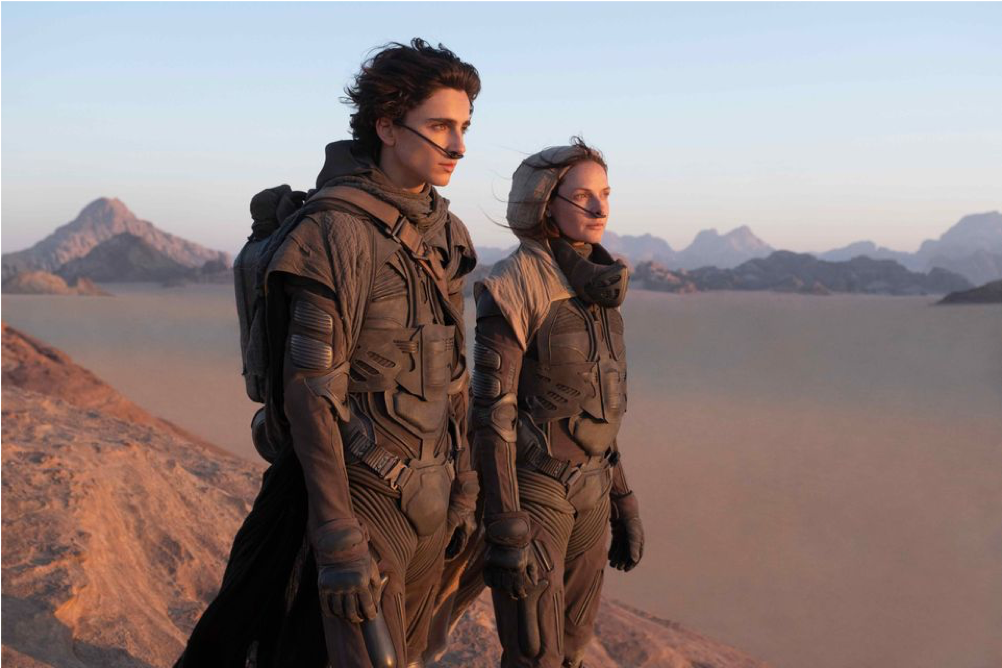 Denis Villeneuve’s new blockbuster “Dune” is without a doubt the new sci-fi movie of the moment. With a current box office of 350 million worldwide, it proves to be one of the most prominent movies of the year. However, the film manages to be more than your typical seasonal blockbuster, as the Canadian director delivers what could be defined as a memorable and visually stunning epic saga of internal introspection.

The film follows the adventure of Paul (Timothée Chalamet), son of the Duke of House Atreides (Oscar Isaak) and Lady Jessica (Rebecca Ferguson). His mother is a member of the Bene Gesserit, a powerful clan of witches with the power of controlling people’s minds, an ability that Paul inherits. House Atreides is ordered to move to the desert planet Arrakis to exploit it by harvesting the most important resource in the universe “the spice”. However, Paul starts having different emblematic visions about Arrakis that seem to be of a prophetic nature, which leads the Bene Gesserit to think that he might be “the one”, a mysterious appellation that is not explained to the audience. In Arrakis, a series of dramatic events unfold one after another and Paul finds himself on the run in the desert, whilst trying to understand his hallucinations and his personal mission.

The film is an adaptation of the novel written by Frank Herbert in 1965, which has built a strong fanbase of readers, including Villeneuve himself. In an interview, he affirmed that he made the movie with the goal of satisfying one single hardcore fan, himself. His passion for the book is shown through the immaculate attention given to the world-building, that entirely plunges the viewer into the universe of the story. A universe that, despite being set in outer space, wishes to keep roots with our reality by borrowing some elements from existing cultures: House Atreides plays Scottish bagpipes to announce its arrival, the court’s doctor speaks Mandarin Chinese, the cultures of Arrakis seem to have an Arab root, and Paul’s name itself is French.

Although having all the elements to be an action-driven space odyssey, the movie is very introspective, typical to Villeneuve’s style, as it follows almost exclusively Paul’s point of view on his quest for identity and purpose. The many dream-like sequences, the multiple close-up shots and the impressive performances of the actors make for a very character-driven narrative. The story explores the themes of the human spirit and its strength when facing adversity and fear, as it is repeated throughout the movie that “Fear is the mind-killer”. This is a character-driven movie of the sort that relies strongly on the actor’s performances perfectly delivered. The stellar Hollywoodian cast also includes Zendaya, Oscar Isaak, Charlotte Rampling, Jason Momoa, Josh Brolin, and many more, who take the mantle of very memorable characters.

With a running time of approximately 2h30, the movie is not afraid to take its time, as every scene is prolonged not only for an effect of gravitas but also to give us the time to appreciate the aesthetic of the universe. The settings are stunning, and the film knows it. The dialogue is indeed rather reduced, as most of the communication is made through visuality, the first example being Paul’s silent but beautiful visions of Chani. Despite the use of visuals to communicate, one of the most striking features of the film is without a doubt Hans Zimmer’s breathtaking score. It manages to convey every single aspect of the plot with striking force, such as the mystery of the visions, the gravity of the situations of danger or the majesticness of the different settings.

The story-telling is dominated by the sense of doom of a prophecy that is impossible to escape. Paul’s journey is already traced, and the plot is led by the invisible and powerful hand of ‘destiny’. Paul progressively becomes a messianic character, who wants to help the greater good by learning to follow his mysterious visions for a final goal that is still uncertain to both the audience and the main character. This unanswered aspect of the plot will certainly be explained in Dune’s confirmed sequel, but the first movie by itself leaves the audiences with more questions than answers. One is extremely surprised when the screen suddenly fades to black and the credits start appearing, which teases the second movie in a way that makes the first one slightly underwhelming. However, one must remember that the role of this movie is s to set the scene for its sequel. It primarily introduces the audience to the complex universe of the story and puts Paul in a situation where he can finally start his prophetic journey in the sequel expected in 2023.

Overall, Dune is on the path of establishing itself as a memorable sci-fi movie of our generation and deserves all of the praise that it is currently receiving from critics and audiences. Check out Dune and many other movies at Barbican cinemas on https://www.barbican.org.uk/whats-on/cinema.