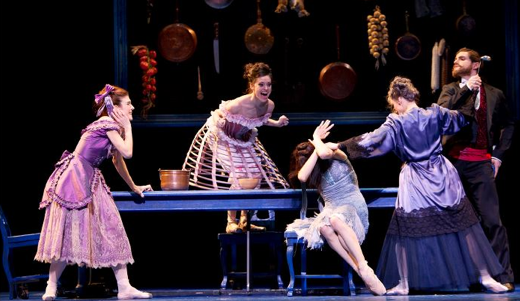 Christopher Wheeldon has revamped Cinderella, bringing the Ballet into the 21st Century. It is still set to Prokoviev’s score, but Wheeldon has played with the story line, keeping it more true to the Grimm Brother’s fairy tale. We have lost the fairy godmother and the pumpkin and we gain four fates and a magical tree. The stage design, set and costume have very much, a modern touch. The performance is set in three acts, meaning that this production is not a short one, however, the overall impression is one that has a magical and childlike mystic.

It was the intention and execution of the set design that captured my attention and awe. The production was very visual throughout, and I can imagine as a child watching I would have felt I had been transported into an enchanted world. The Ballet, for me, has always been quite the mesmerizing place to visit. This production captured that emotion and ran with it. The vision created at the end of Act 1 of Cinderella leaving on her carriage, was spectacular using masks, billowing sheets of material and physical theatre techniques. I can also still picture the beautiful, chandelier lighting created for the Palace ball scene, as well as the swaying chairs, hanging down from the proscenium arch, framing the stage for Act 3.  All of these highlights would not look out of place in a contemporary dance piece, but in a Ballet, they were unexpected moments of joy. Why shouldn’t Ballet incorporate features of modern dance today in their productions?

There were occasional moments in the choreography that felt bulky. The grand ensemble sections of dance that should have flowed and swept across that stage, instead had floor patterns and unison actions that were hard to spot. There was no real emotive connection to the music and the corps de Ballet’s choreography, which was disappointing; this being such an important and regular feature in the more traditional Ballet productions.

There was no denying however, Anna Tsygankova and Matthew Golding’s skill and performance quality.  They both executed their characters’ roles with ease and flair, perhaps the fact that they are actually a couple helped to tell the romantic story.  Other notable performances go to Larissa Lezhnina for her witty performance as Cinderella’s stepmother and Remi Wörtmeyer as the Prince’s friend Benjamin.

This is definitely a show that the whole family can enjoy, children will leave amazed!