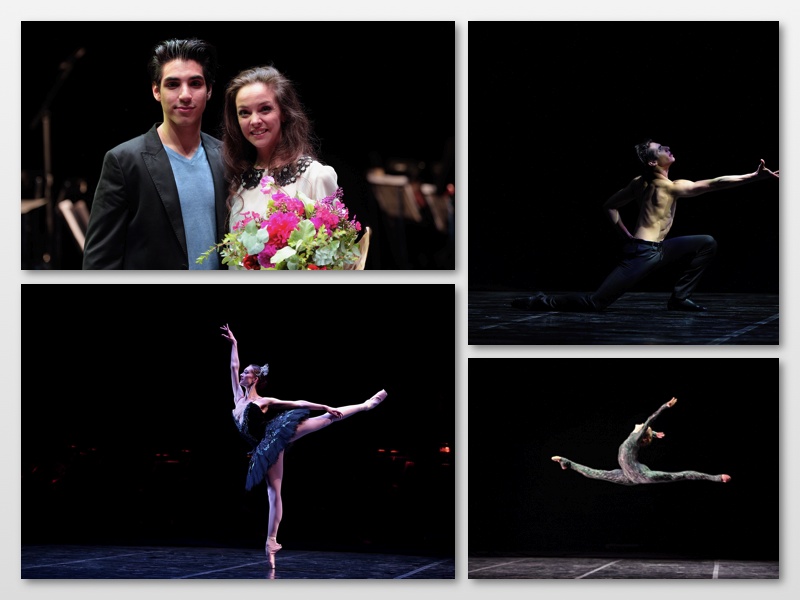 Having never been to an Emerging Dancer Awards Evening, I was unsure what to expect, or how much joy one could have at such an event. I was very pleasantly surprised!
There was a wonderful, supportive and excited atmosphere in the auditorium from the very start. The usually very polite and dignified Ballet audience tonight was loud and jubilant in their appreciation of the finalists’ performances.
The evening, presented by Natasha Kaplinsky, was opened with each finalist partnered up and dancing a Pas de Deux.
From this section Jeanette Kakareka’s performance of the Black Swan was the stand out performance for me. Her presence on stage was captivating and she truly embodied the mood and tone.
Cesar Corrales also made an impact and his bounding, energetic performance was a huge hit with the audience. His leaps and turns were, in all fairness, incredibly well accomplished.
The next section of the competition was the contemporary solos. For me, the dancers that stood out here were the ones who really ventured away from the classical Ballet vocabulary that they had just performed. They allowed their body to explore, and highlight their other technical abilities. Two great examples of this, was the performances of the work of Annabelle Lopez Ochoa whose choreography recently featured in the ENB production, She Said.
By the time we reached the interval, the competition element was over. During the second act Laurretta Summerscales, who was promoted to Principal earlier this year and won the People’s Choice Award 2015, and last year’s winner, Jinhao Zhang, treated us to stunning performances. Both delivered heart felt, heart-stopping duets.
And finally came the results. Cesar Corrales won both the People’s Choice Award, as well as the 2016 Emerging Dancer Award. He is definitely one to look out for, English National Ballet have announced that he will be performing the role of Prince Siegfried in their production of Swan Lake in June.
The most touching moment for me was the announcement of a new award, the Corps de Ballet Award. It was lovely to hear Tamara Rojo speak so passionately about the ENB’s Corps de Ballet and the hard work, commitment and community work they put in. The winner Jennie Harrington was visibly moved by this recognition.
English National Ballet were presented as a warm and welcoming company who really care and look after their fellow dancers. It was a privilege to be allowed to feel a part of that dynasty during this production.
Reviewed by Sara Daniel
Images from top left: Cesar Corrales, winner of the Emerging Dancer and People’s Choice Awards with Jennie Harrington, winner of the Corps de Ballet Award/Cesar Corrales in the Contrbajo para Hombre solo by Julio Lopez/Jeanette Kakareka in the Black Swan pas-de-deux/Isabelle Brouwers in Pelican by Charlotte Edmonds (C) Laurent Liotardo