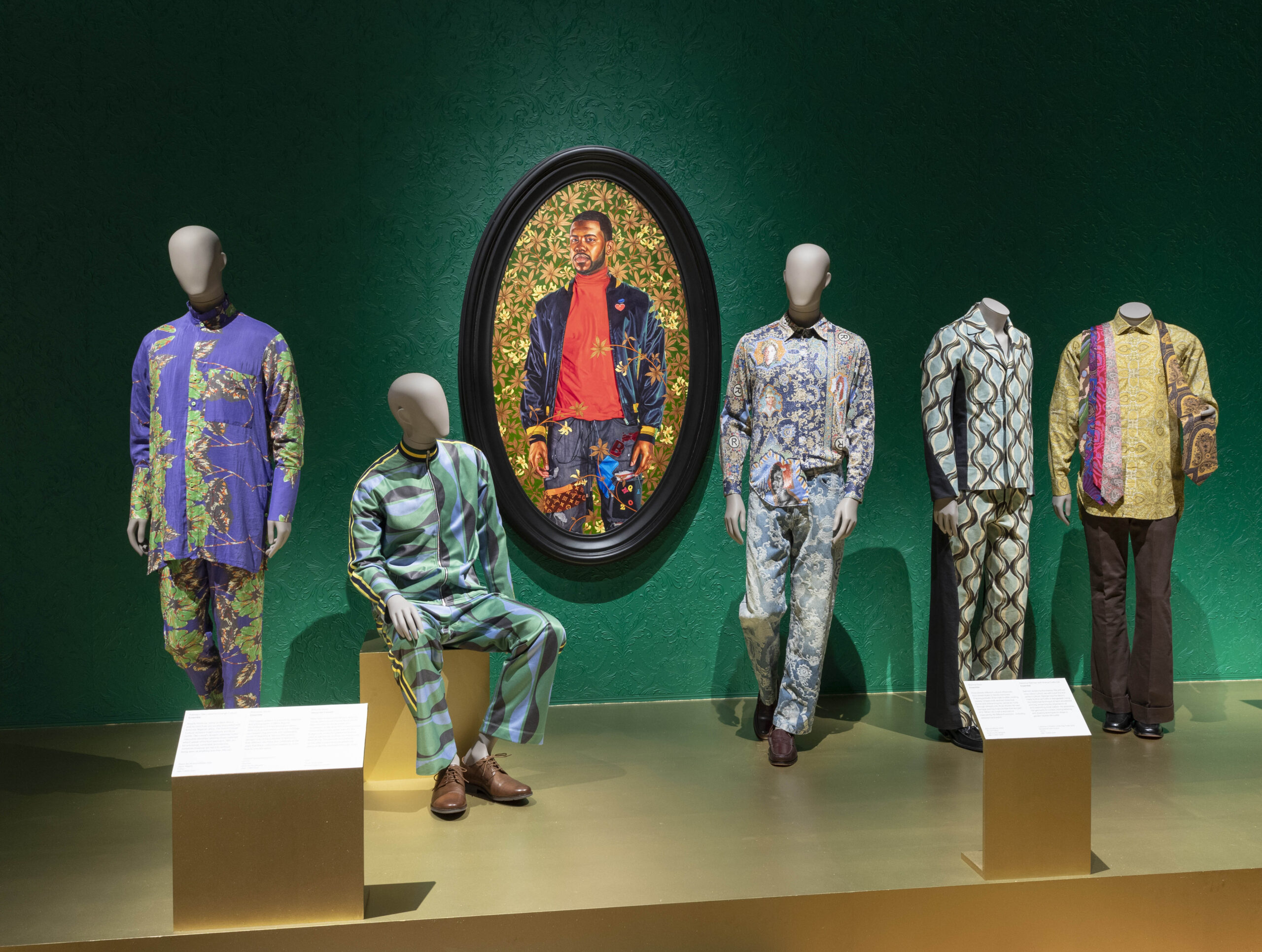 “It’s often only the clothes that keep the male or female likeness”- Fashioning Masculinities: The Art of Menswear| V&A

Fashioning Masculinities: The Art of Menswear on display at the V&A explores the artistry, audacity, and ambiguity of male fashion.  Unravelling the history of masculine attire, the exhibition reveals how designers, tailors, artists and their clients and models have helped dress and fashion manliness. Contemporary outfits by legendary designers and cultural icons are displayed alongside treasures from the V&A’s collections and landmark loans. These include classical sculptures, Renaissance paintings, photographs, and film performances. The exhibition features around 100 looks alongside 100 artworks, displayed thematically across three galleries, Undressed, Overdressed, and Redressed. It traces the shifting ways of portraying masculine style: shaping and enhancing bodies, flaunting status and wealth, fabricating and dissecting tailoring norms and finally revealing the man behind the robe.

Historically, clothing almost had the universal function of creating and reaffirming gender and class differences. The exhibition suggests that men’s clothing and fashion present a historical oscillation between two recurring models marked and evident in contemporary Western societies: the playboy with the example of G.B. “Bea” Brummel associated with flamboyance, and the puritan masculinity emblem of moderation which consolidated the end of the 18th century. What emerges from the 19th century onwards is the progressive genderizing of men’s fashion and the slow but irreversible process of dissolution of class differences.

Clothes and rules of decorum have been imposed on man, tailor-made to measure and challenge his nature often with reference to classical antiquity. Mark Twain suggests that ‘clothes make the man. Naked people have little or no influence on society’. Yet the first gallery challenges this assumption, presenting the male body and underwear alongside plaster casts of the Apollo Belvedere and the Farnese, painted and admired by 18th century European elite on their Grand Tour in Italy. Since then, references to classical ideals of masculinity have permeated contemporary menswear, perpetuating a tradition of depicting toned and sculptural male bodies whose silhouettes are made increasingly visible under a pleated shirt, creating an in-between state of undress- neither completely nude nor clothed.

The motto ‘dress like you’ve made something of yourself, even if you haven’t’ reiterates the image of winning masculinity linked to social status and rank as well as to the performance of public functions. Between the 16thand 18thcentury, sumptuary laws and constraints of complex interpretation codified the elite masculine wardrobe of the European courts, often strongly characterized by flamboyant dressing, ostentatious embellishment, expensive fabrics and intricate patterns coming from all parts of the world. As we walk through the second gallery, we are constantly reminded that the opulence of outfits displayed was not deceiving of the status, wealth, and individuality of the men who wore them, men for whom functionality mattered less than the show. Oversized silhouettes, lavish materials like silk and velvet in daring colours, ribbons and lace, botanical motifs, and make up are only a few of the elements that defined masculine fashions of the time. Paradoxically we will find all these elements in a woman’s wardrobe today. The incongruity is not yet between femininity and masculinity, rather it is about flaunting or concealing social rank and boasting an economic availability that only a few could afford.

The last gallery explores how historic ideas begin to shift starting from the 19th century, with extensive photography showing changing styles and attitudes. The new male fashionableness, born from the political turmoil of the French Revolution which despised the frenzy and folly of the Ancien Régime, promoted a more austere and rational approach to masculinity, reshaping menswear into the more practical and simple form of the suit. ‘Dressing well is a form of good manners’ became the anthem of the 19th-century man of fashion the Dandy, epitomised by the figure of Oscar Wilde. Industrial milling and mass-production of warm and practical muted wools coming from the English countryside’s tailoring industry, made clothing accessible to all spreading across the working classes of Europe. The greatest evolution of men’s clothing took place in the twentieth century, due to the affirmation of an informal and casual style for men, also informed by military attire.

The slow yet irreversible process of dissolution of class differences is accompanied by an implacable instinct to safeguard what previously belonged to men and the male sphere. A new ideal of man is outlined in opposition to that of woman. No longer the keeper of status and wealth, the modern man finds new life and virility in his gender and sex, in being born a male. All elements indicating fluidity, where the masculine merged with the feminine became a threat. Until recently, a man wearing even just a suit made from soft or draped fabrics would become the object of ridicule.

Deconstructing the idea of masculinity as it has historically been established opens a new perspective on the variety of possible masculinities that have unravelled over the centuries, from the Renaissance to global contemporaneity. The exhibition is certainly motivated by the intention to celebrate the multiplicities of male sartorial self-expression, dressing beyond the binary. However, as Armani reminds us “fashion is not unisex”. The great revolution in today’s fashion is not to be found in the dissolution of the alterity between masculinity and femininity, which would risk ridiculing and debasing both men and women, but in so far as we can choose to dress masculine or feminine. Nevertheless, we should never forget that we are choosing.

Fashioning Masculinities: The Art of Menswear V&A On now until Sunday, 6 November 2022 The Sainsbury Gallery

This exhibition contains some depictions of nudity. Advance booking is recommended.