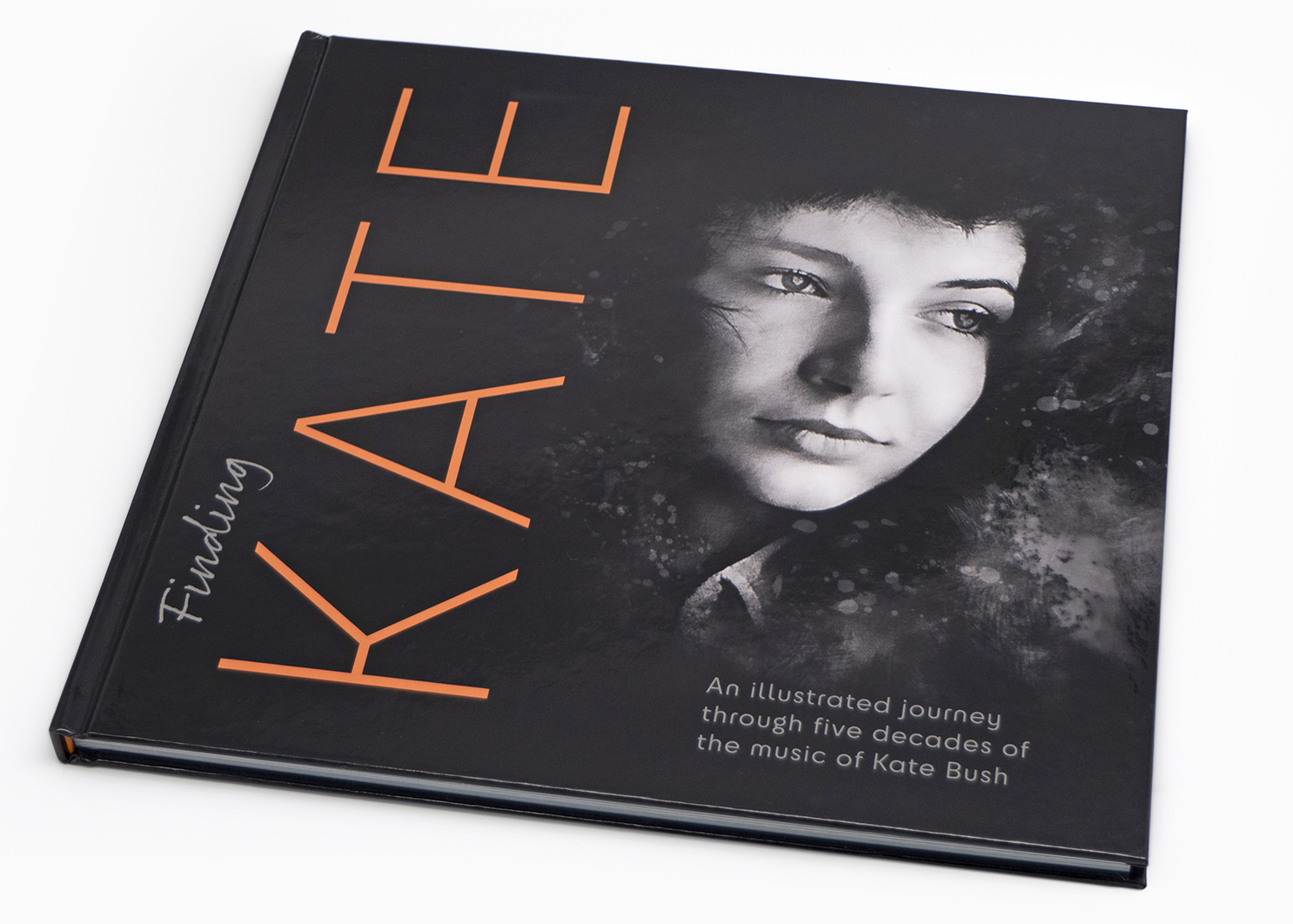 Finding Kate – An Illustrated journey through five decades of the music of Kate Bush, is a gorgeously glossy coffee-table book that gently takes the reader into the sonic-world of the enigmatic and illustrious songstress. Written by Michael Byrne and Marius Herbert, both devoted fans of Kate (as is this reviewer!). This self-published tome first published in late 2021 was Kickstarter funded with contributors spanning 25 countries.

Before I get into the review properly, it would be churlish not to mention that 2022 has been Kate Bush’s year in the most unexpected way. The meteoric rise of ‘Running Up That Hill’, her seminal 80s hit, featured prominently in the TV show ‘Stranger Things’, has given Kate a new-found popularity with a younger audience. As I write this, ‘Running Up That Hill’ is no.1 in the Global 200 Chart. Serendipitous as this must be for the authors of ‘Finding Kate’ (and I hope this boosts interest in their book), it is with a wry smile that I note some passages will need to be rewritten due to ‘Running Up That Hill’s current chart success.

Now onto the contents of the book itself, there are five sections covering the different eras of Kate’s music career and legacy including the late seventies, early eighties, ‘85 to ‘89, nineties to mid-noughties and 2011. The authors have done a fantastic job with the biographical material, it’s zippy and readable for serious and casual fans alike. Also, within the five musical eras, the writers have included in-depth descriptions of their favourite tracks (there is a full list of these further below, which I hope will encourage you, dear reader, to start on a joyous downloading journey). Interspersed throughout there are many dreamy images Kate and vivid illustrative scenes lifted from her songs. Great care has been taken to ensure the overall production of the book has a luxe feel.

Kate’s rise to fame is thoughtfully covered. I was struck by how remarkably young she was, at only 19, when she first burst onto the late seventies’ music scene with her self-penned no. 1 hit ‘Wuthering Heights’. Prior to this, she had been composing songs on the piano, learning to dance under the tutelage of mime artist Lindsey Kemp and honing her performance and singing skills gigging around South London pubs. Propelled into instant stardom at such a tender age, those early years moved at a break-neck speed. With two albums under her belt by 1979, she toured the UK and Europe with her live show ‘Tour of Life’. This Kate Bush fan was charmed that the book included a curious but little-known fact about our songstress. For the tour, Kate and her sound engineer invented the handless microphone so she could sing and dance at the same time, in 1979 this was highly innovative and eons ahead of what anyone else was doing.

Reading through the passages about how Kate approached and produced her albums, I was reminded of what a true auteur she is. Overseeing every aspect of her artistic output, from the writing and production of her music, as well as storyboarding and directing the music videos. It’s impressive to consider, that at 23, Kate cut her teeth self-producing 1982’s ‘The Dreaming’. Then just a few years later wrote and produced what is considered her magnus opus ‘Hounds of Love’ to critical acclaim and chart success. It’s an album that’s as fresh now as it was back in 1985. ‘Running Up That Hill’ (was the lead single) and is enjoying a second lease of life 37 years later, a testament to the longevity and appeal of Kate’s music.

‘Finding Kate’ tells the remainder of our heroine’s story with admiration and care. The hardships and challenges of her life are sympathetically portrayed without being cloying. Having had enough of scrutiny and fame, from the mid-90s onwards, she withdrew from public life to raise her son, Bertie, with her partner, Danny McIntosh. It’s around this time that album releases stalled. With no musical output for around a decade, Kate surprised her fans and the public alike by releasing ‘Aerial’ in 2005, to much fanfare and critical adulation. The final section of the book covers 2011, which was a bumper year for Kate’s fans used to her staggered approach, ‘Director’s Cut’, an album of reworked songs was released and later that year ’50 Words for Snow’.

It was a pleasure to read through the reflective pieces on Kate’s songs and be reminded of the weird and wonderful subjects she’s covered. There’s the ghost of Cathy Earnshaw pleading with Heathcliffe through the window to let her in (Wuthering Heights), a syphilitic elderly English composer shouting at his scribe (Delius), nuclear war from the perspective of an unborn child (Breathing), people smugglers on a risky mission (Night of the Swallow), a woman lost at sea desperately trying not to drown (The Ninth Wave), Molly Bloom’s soliloquy from Ulysses (The Sensual World), Kate mimicking blackbirds’ singing (Aerial Tal) and a woman making love with a snowman that’s come to life(!) (Misty), to name but a few.

Our authors, Michael Byrne, and Marius Herbert are Irish, and they emphasize how Kate’s Irish heritage (she is half-Irish from her mother’s side) have greatly influenced and shaped her music. This is evidenced on many of Kates’ songs particularly ‘Army Dreamers’, ‘Night of the Swallow’ and ‘Jig of Life’ – all are eulogised with their own pages in the book. I agree with the writer’s that Kate’s cover version of Irish rebel-song, ‘Mná na hÉireann’(meaning women of Ireland) emotively sung in Irish is aurally stunning. It’s fantastic to see its inclusion in the book and strongly urge anyone reading this to listen to ‘Mná na hÉireann’ now.

Throughout ‘Finding Kate’, the authors infuse their writing with their thoughts and feelings about Kate and her songs, which makes the reader feel like they’re joining in on a conversation with their music-obsessed, nerdy but cool friends. If you’re new to Kate or a long-time fan, perusing the pages of ‘Finding Kate’ is a real treat. Gift it to yourself and your loved ones! You won’t regret it!

Songs featured in ‘Finding Kate’ for some happy downloading:

Independently published, Finding Kate is available in hardcover /casebound at €39.95 plus shipping, (including worldwide) from the authors website at: https://bit.ly/3QmOZal

Reviewed by Jane Ritchie – Jane is a volunteer writer for Abundant Art. A Generation X Londoner who still loves going to gigs, indie-clubs and vinyl shops. She discovered Kate Bush at the impressionable age of 10 and has been a die-hard fan ever since.