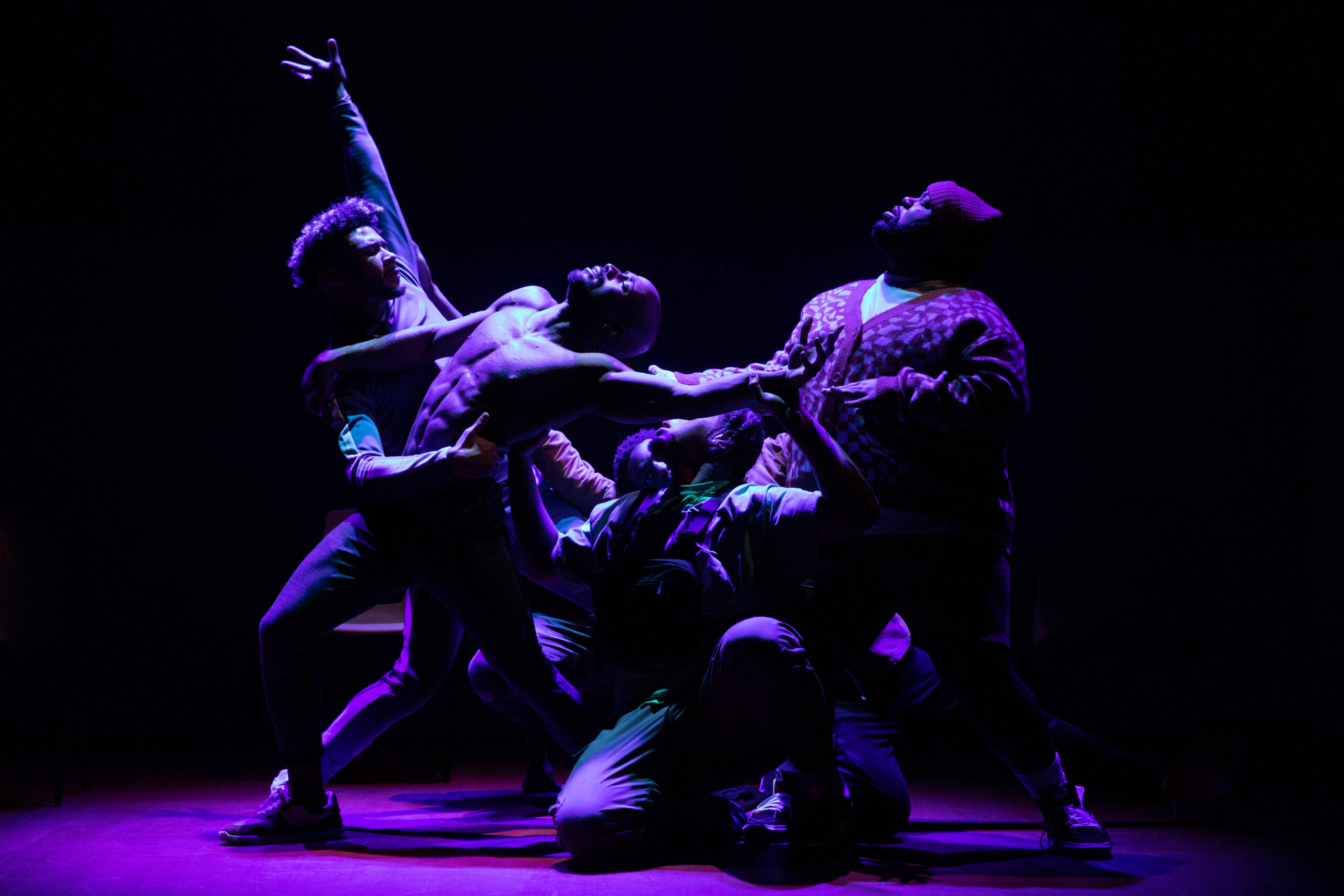 A spotlight floods the centre stage and we see six men moving fluidly. A saxophone plays a melancholic tune in the background. Bodies move in undulating formation. Limbs weave slowly between one another, reaching for their own space. Softly, the actors begin to speak and the audience is captivated by every word thereafter.

‘For Black Boys Who have Considered Suicide When the Hue Gets Too Heavy’ sees the coming together of movement, song, music, poetry and dialogue to translate the experiences of six young black men. Equal parts heartbreaking and hilarious, the production pays homage to Ntozake Shange’s seminal choreopoem ‘For Colored Girls Who Have Considered Suicide / When the Rainbow Is Enuf’.

Anna Reid’s set is subtle and powerful; brightly coloured plastic chairs and block colour walls sit somewhere between a primary school classroom and a community centre. Perfectly reflecting the production, as the actors jump between memories of childhood and their current group therapy session. The set is activated by Rory Beaton’s lighting; bright rainbows and moody sunsets.

‘For Black Boys’ sees the protagonists take turns to share stories. The conversation is filled with discussion and disagreement, illustrating that there is not one single black experience. However, the cast is united as they examine the discord between what is expected of them, as young black men and their lived experiences. Here, the intersecting narratives are raw and moving, examining racial profiling, sexual abuse, hyper-masculinity, discrimination, queerness and violence. But they’re also really funny. This dramatic contrast between witnessing deep emotional wounds and laughing out loud is jarring, a little frantic.

‘For Black Boys’ was written and directed by Ryan Calais Cameron in association with New Diorama Theatre and Nouveau Riche. Originally conceived in the wake of the killing of Trayvon Martin in 2013, the play has been some ten years in the making – hard to believe as it feels just as pressing now. Six actors form the entire cast; Mark Akintimehin, Emmanuel Akwafo, Nnabiko Ejimofor, Darragh Hand, Aruna Jalloh and Kaine Lawrence. Each deliver fantastic performances, vulnerable and complex.

Throughout, the actors speak directly to the audience, as if we are just on the other side of a confessional. This directness is heart-rendering. ‘For Black Boys’ is a truly collective experience – the heartache and love portrayed on stage spill into the audience, who respond with roaring cackles and sobs. An important and affecting performance, and one not to be missed.

‘For Black Boys Who have Considered Suicide When the Hue Gets Too Heavy’ runs at the Royal Court Theatre until 30 April. Tickets are available here.