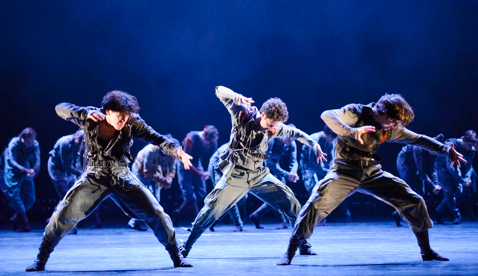 There is something about Shechter…Even harden Ballet fans in the audience, who had not seen any previous Shechter work, had to admit that his work has its own energy that whips you up along for the ride.

I really enjoyed the juxtapositions throughout the evening, the first and most obvious being that Shechter was sandwiched between the more traditional works by Balanchine and MacMillan. I spent some of the performance sneaking looks at members of the audience trying to gauge their reaction to this unusual interruption to their normal classical narrative. I saw some nervously glancing around, but others completely enthralled by the earthy actions and thumping heartbeat.

The evening was a treat, to be honest, I am not sure there are better places to spend a Friday night!

The Four Temperaments was thoroughly enjoyable with its strong women powering across the stage; legs high, pelvis thrust forward. The awkward body shapes highlighted by the plain practice clothes as costumes. Song of the Earth, by Kenneth MacMillan was a platform to  showcase the three huge talents of Carlos Acosta, Thiago Soares and Marianela Nuñez. Nuñez in particular was stunning to watch in her depiction of the role ‘Woman’. She embodied the character with such sensitive emotion and expression it was breathtaking.

However, it is Shechter’s work that made the biggest impression on me. I can’t quite put my finger on what it is about his work that I like. His use of music, the percussion in particular is intelligent as it awakens and draws in the audience. His dancers physically demonstrate this joint heartbeat; their timing is incredible, the large cast of  twenty moved and breathed as one. At times they looked like a shoal of fish, twisting and moving around the stage in complete sync with one another. Then suddenly, this group would disperse and complete contrasting actions would be juxtaposed across the stage. The transitions were so smooth that it felt like the dancers were playing tricks on the audience.

There was a lot of repetition for just thirty minutes of choreography, but the ‘dancing like no one is watching’, lack of inhibitions and dancing from the inside out – the very Shechter –esque movement vocabulary that can be seen throughout his work never fail to draw you in and make you smile.  Untouchable was no different.