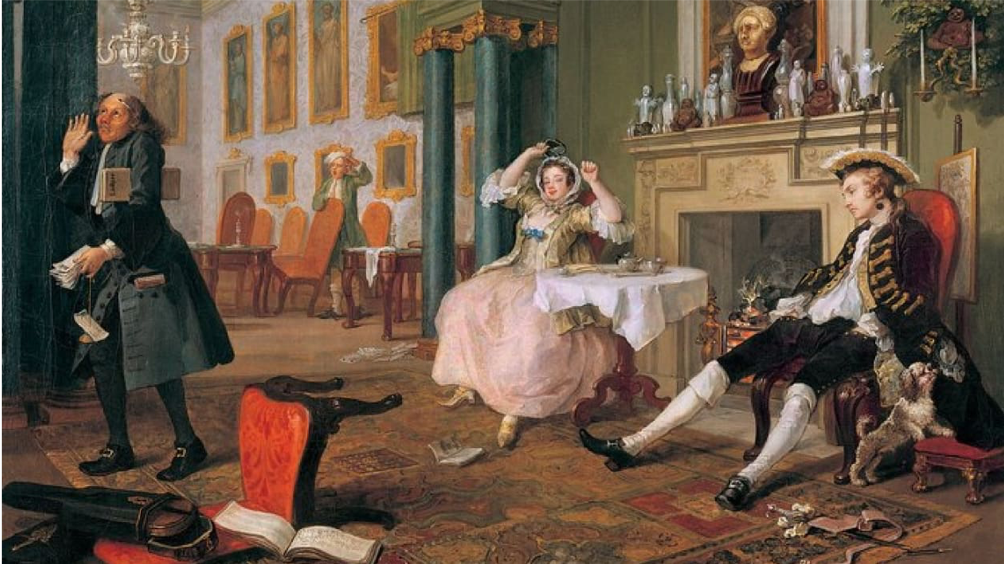 Tate Britain is currently hosting the exhibition “Hogarth and Europe”, which skillfully displays the works of the famous British painter, whilst offering an insight into the vibrant historical context of Europe in the XVIII century. The paintings act as a window into society at that time, in which flaws are drastically exaggerated through caricature and mockery. The artist takes the role of a witty and cynical observer. Often represented in the background of his paintings, he judges what he sees without ever being moralistic, offering a cheeky perspective on the ridicules made on society.

The exhibition immerses the audience in its historical context by showcasing the works of many other emblematic artists of the time, in addition to briefly focusing on four main cities that fostered culture and art at the time: Paris, Venice, Amsterdam, and of course London. Europe was experiencing a period of economic growth and deep social change, which contributed to the creation of new creative freedoms in art. Drunkenness, sex and all sorts of immoralities were depicted without filters and were used to mock the nobility, mirroring an age where the social hierarchies were crumbling. However, the main focus of mockery, especially in Hogarth’s painting, was the ever-growing bourgeoise, that he considered materialistic, greedy and hypocritical.

Contrary to what one might think, Hogarth’s depictions of London life weren’t considered controversial and were instead widely popular. The grotesque scenes he represented were warmly welcomed by audiences who considered them as a source of amusement. Hogarth was especially appreciated for his insightful and satirical worldview that avoided controversy by never calling for change or revolution. On the contrary, the artist was a strong supporter of the government and even became a painter for the King.

This form of art, stripped of everything that had made it sacred and untouchable up until that point, was given a brand new function: make the audiences laugh and also see the depravities of their society. This process of desacralisation of art, although making art more accessible and emancipated from the strict rules of Baroque and Classicism of the previous century, loses a little of its symbolical aspect. The paintings are sometimes closer to caricatures that you would find in a journal rather than what you would initially expect from art. The expansion of Romanticism in the following century comes almost as an answer to this satirical social art, as it represented a more internal and psychological search in an otherwise materialistic world.

On a compositional level, the paintings are extremely rich in information, characters and actions. Every painting will take you through moments of thorough observation, as each character has its own narrative dominated by chaos and dynamism. This sort of storytelling holds a sort of theatrical aspect typical to Hogarth, which is strongly reinforced by its caricatural and comedic overtone that could belong to the Commedia dell’Arte.

The exhibition repeatedly warns its audience of the political incorrectness of the paintings, almost as if anticipating some sort of scandal. There are indeed many depictions of assault, sexual misconduct and racist and xenophobic caricatures that the wall texts keep warning you about, incase Hogarth’s provocative humour offends even today’s audiences. Though this is something that I feel the artist would probably be extremely proud of.

More than an artist, Hogarth was an anthropologist, and today his exaggerated depictions of XVIII society are key to understanding that fervent time in history. Get your tickets at https://www.tate.org.uk/whats-on/tate-britain/exhibition/hogarth-and-europe.