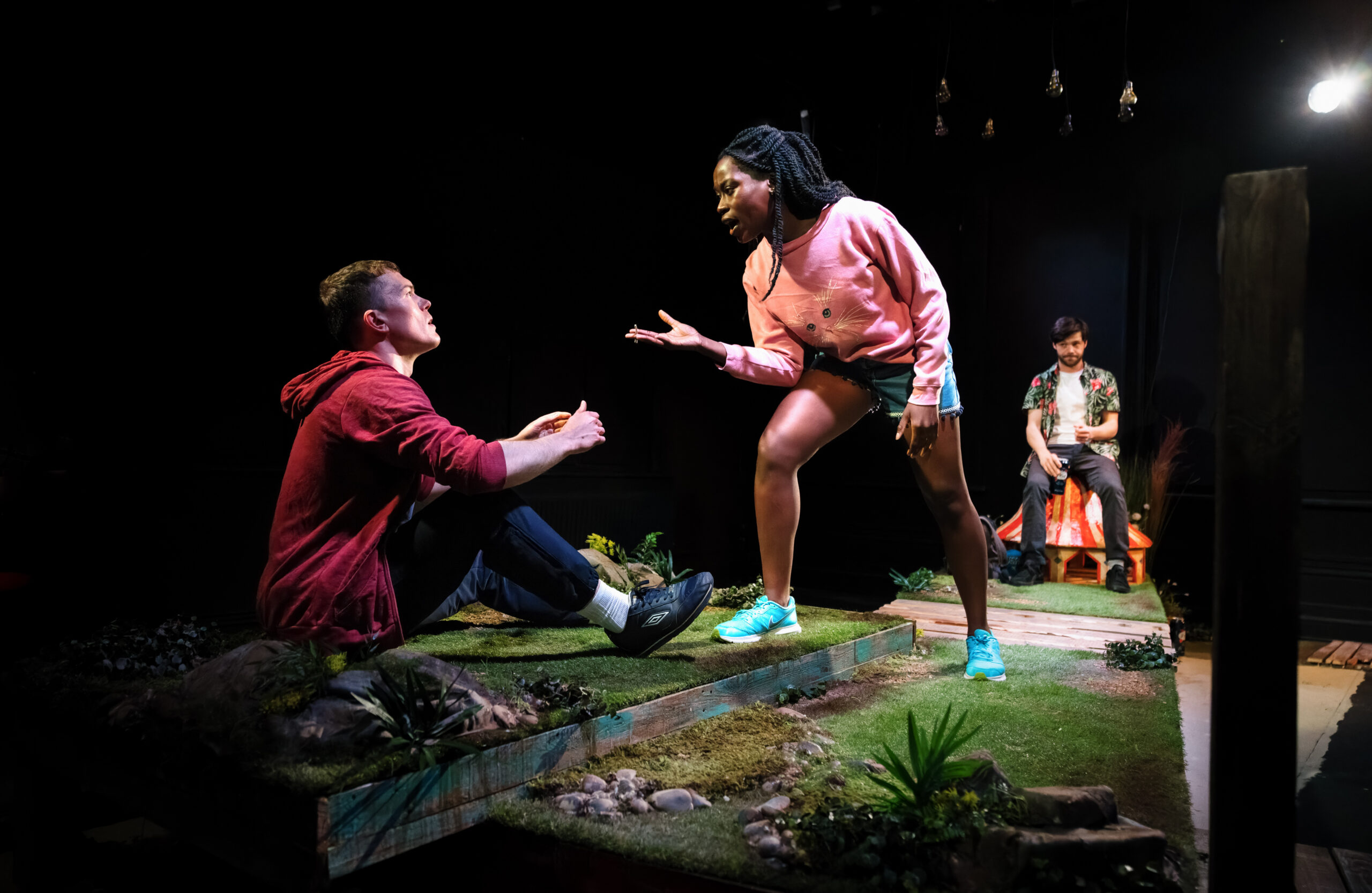 If. Destroyed. Still. True. tells the epic story of modern everyday lives and asks what happens when the place you were born can no longer be called home. James (Theo Ancient) is home from University with his new girlfriend Charlotte (Whitney Kehinde) and they can’t wait to reunite with John (Jack Condon), James’ best friend. But things have changed since they last met and none of them know yet how significant this day will be for the rest of their lives.

The play is intended to spring an emotional response to the topic of migration in general and makes the point that it is very much a current issue. It’s about displacement, people moving from one place to another; but also about stagnation, which is convincingly illustrated by the character of John, whose words and actions often don’t fit his thoughts and feelings.

Set atop an Essex coastline cliff, this is a three-part play that covers three visits James makes back home to Essex over the course of eight years.  The first time shows him bringing his new girlfriend Charlotte- an utterly classist, metropolitan elitist, and pretentious young black girl to meet his family. She is introduced to his best mate John- a full-blown Essex boy who likes to feed stray cats behind Morrisons and has adopted a hedgehog. The second visit is after Charlotte and James are married, where they check in on John, after a drink driving accident, which left him limping. The third and last visit is with a heavily pregnant Charlotte where James tries to come to terms with what has happened to John. This is for the audience to discover as the story draws to a close.

With the audience on three sides of a runway-style stage (designed by Anna Kelsey), there’s a closeness and intimacy that is impossible to escape from. The play covers a spectrum of difficult topics like mental health and social alienation that lend themselves well to cliché dialogues that dominate the script. James addresses John in the first act, inviting him to walk out of the “shit hole” he’s trapped in just as he has done. As if John could.

After this, John and Charlotte no longer speak. This means that Kehinde is absent from part two where we see the boys’ struggle to reconcile with one another, and the difficulties they face trying to understand who they were once, and to accept who they are now.

As life pulls childhood best mates apart, we bear witness to a dramatic ending and we realize what we stand to lose when we cannot truly communicate. Finding peace and quiet sometimes is farfetched. Jack Condon gives an altogether heartfelt and thoughtful performance as John. We are inclined to empathize with him as he is the character that faces challenges both visible and invisible. His presence is engrossing as he bludgeons his way through nuances of chronic vulnerability and with the false confidence of a man who is fundamentally unsure and in need of help. Theon Ancient portrays a more materially successful but similarly unsure James.  His character lacks depth and is devoid of any light or shade, partly due to the constraints of the cliché-ridden dialogues. They make a sad pair that simultaneously connect us to people who may not be on the same path.

The character of Charlotte gets a chance to redeem herself in the latter half of the performance. Now pregnant, we see a rich and tender woman who has been woven into the two men’s unhealthy web. It’s a renewed portrayal of Charlotte charged with stereotyped feminity. Had she tried harder in having a relationship with her husband’s best friend and soulmate, could things between John and James, as well as between her and James gone differently?

As we come to know the characters in different stages of their lives, we see that underneath the mask and layers there’s a fundamental question of what is left when apologies, justifications, goodwill, reasoning, courtesy and forbearance wear thin.

Check out behind the scenes footage of the play here – www.thehopetheatre.com

Reviewed by Rachele Nizi- After completing her MA in Reception of the Classical World at UCL, Rachele joined Abundant Art as a creative writer. Her British and Italian origins have inspired her to want to study Art History and European Literature, with an interest in the afterlife of antiquity in the Western tradition.