If We Delete Green, If We Start Caring About Plants – Exhibition Review – Abundant Art 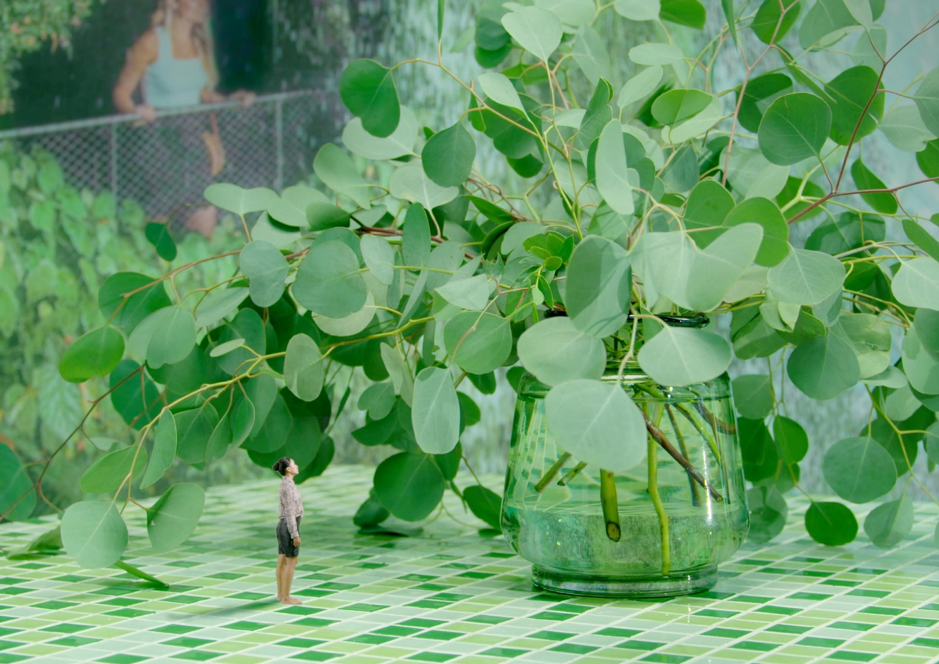 If We Delete Green, If We Start Caring About Plants – Exhibition Review

Colour, passes through our eyes and settles in our minds. Leafy greens and blooming reds signal the coming of the spring, while multilayered ocean blue breaks into bubbling whites giving birth to Venus and also inspiring poetry. As the most delicate instrument to affect our emotions, colour has been given rich symbolism throughout human history. Purple, for example, is easily interpreted as royalty, white as innocence, blue as despair. However, the meanings of colours as they are known today are ambiguous; it is often overlooked that the same colour has different connotations depending on the era and region. In an attempt to unfold various meanings of the colour green, Beijing-based visual artist Ma Haijiao explores the multilayered symbolism of this special colour through his homonymous video installation and an ongoing photography series ‘If We Delete Green, If We Start Caring About Plants’.

Today, the meaning of green is often centered around environment, safety, and hope. In his book, Green: The History of a Color, Michel Pastoureau traces the development of green from a symbol of life, luck, and hope, to one associated with disorder, greed, poison, and the devil. Using his explanation, it becomes clear that only in the Romantic period was green established as the colour of nature. Having been indirectly influenced by Michel Pastoureau as well as books such as Brilliant Green: The Surprising History and Science of Plant Intelligence by Stefano Mancuso and Rousseau’s botanical writings, Ma Haijiao attempted to map out the symbolic meaning of the colour green as an abstract symbol at different levels.

In his view, green symbolizes ‘artificiality’. This can be exemplified by its use in film production to cut out images since green is the farthest away colour from humans’ skin tones. On the other hand, green is also rich in social significance as illustrated by numerous art historical references. In addition, growing interest in green led him to consider plants, the most direct carriers of green. Despite being green in colour, plants are far from being artificial and rather born of nature. In this sense, “the artist deliberately blurs the boundaries between the ideas of ‘green’ and ‘plant’ in his thinking, thus presenting a false but true depiction of ‘artificial and natural’, ‘reality and camouflage’ and ‘signification and symbol’ in the video”, as explained by the curator at Tabula Rasa Gallery London.

Along with basic research, Ma Haijiao elaborated on the subject by cultivating plants himself or visiting botanical gardens. As part of the final production stage of the video installation, he created an artificial green studio in Beijing, and traveled to Xishuangbanna, to film the largest and most comprehensive tropical forest in China. With two videos shot in both the studio and tropical jungle and presented on two different screens at once, Ma Haijiao invites visitors to contemplate the dual themes of green and plants, and to find an answer as to what will happen ‘If We Delete Green If We Care About Plants’.

Through the artificial greenery, green backdrops for special effects, and LED screens with rolling green texts that appeared alternately on the scenes, we as visitors are also given the opportunity to observe green in its broadest sense, to revel in the vibrant palette of greens, and to immerse ourselves in a visual feast of multiple shades of green.

If We Delete Green, If We Start Caring About Plants by Artist Ma Haijiao

Sun A Han is a volunteer writer for Abundant Art. Originally from South Korea, she discovered her passion for art at the age of ten, by encountering Picasso’s masterpiece – “Guernica”. She is currently pursuing a master’s degree in Art Theory and Philosophy at Central Saint Martins. As a writer, she aspires to write about art that heals the soul, touches the heart, and gives voice to the oppressed.