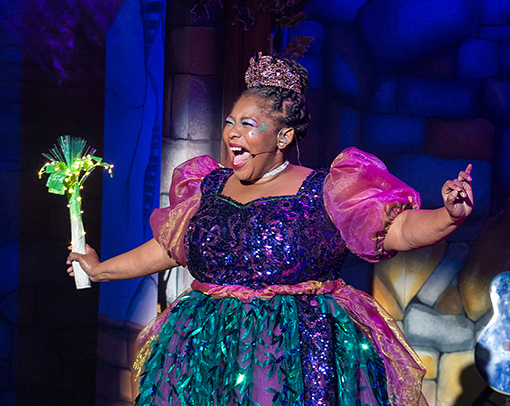 The New Wolsey’s Rock ‘n’ Roll shows are well known for their slapstick comedy style, lots of corny jokes,  great music, and interactions with the audience. If you have seen Jack and the Beanstalk when you were young, this is the perfect time to take your children to discover this magical musical. The childhood movie I used to watch has taken a modern turn and is now well anchored into the 21st century. This is a new adaptation full of glitter and modern songs filling our ears and eyes with magic.

The New Wolsey Theatre immerses us into another dimension. Fairy Aubergine with her magic leak invites us to Jack’s world where farm animals dance at the windows and his mother Dame Dolly Durden makes jokes that only the parents will understand. Suddenly, a gigantic giant interrupts the perfect wedding between Jack the farmer and Jill, a wealthy young woman. Jack will have to find a bag of gold to save the love of his life, but how will he manage to do so when the gigantic giant is threatening him? We follow him on his adventure on Earth and then climb with him to reach the giant’s castle in the clouds where he might end up cooking in a pot for dinner.

We are directly involved in Jack’s adventures to save his wedding by singing with him the famous songs we all know and helping him to defend himself in front of his mother. The musical atmosphere is perfectly grasped with multiple sound effects matching the actors playing instruments and dancing on stage. Indeed, the cast for Jack and the Beanstalk is formed of multi-skilled actor-musicians. The Director Kate Golledge uses a screen enabling a smooth narrative transition between the barn and the house of the impressive gigantic giant. We discover a new world in the clouds where giants sing to avoid being the next gigantic giant’s dinner.

This year, the Rock ‘n’ Roll Panto offers the audience a new opportunity to watch the show at home, thanks to a live stream and it works perfectly: the warm atmosphere of the stage reaches our home. The online audience is engaged thanks to the interactions and perfect camera work. From home or at the theatre, every family will discover this magical world in which the beans reach the sky where giants are living.

This magical musical will take you back to your childhood and make you dream with well-known music, jokes and wonderful costumes. It will run until January 8th at Wolsey Theatre in Ipswich. Get your tickets at https://www.wolseytheatre.co.uk/shows/jack-the-beanstalk-2/.

Reviewed by Alix Berthelot–Moritz- Alix is a volunteer writer for Abundant Art. Originally from Normandy, France, she follows her passion for journalism and art by studying at the European Political and Social Sciences of UCL, London. As an international student living in London, she is determined to fully experience and discover the entirety of the city’s vibrant arts scene, and share the beauty of it through her writing.