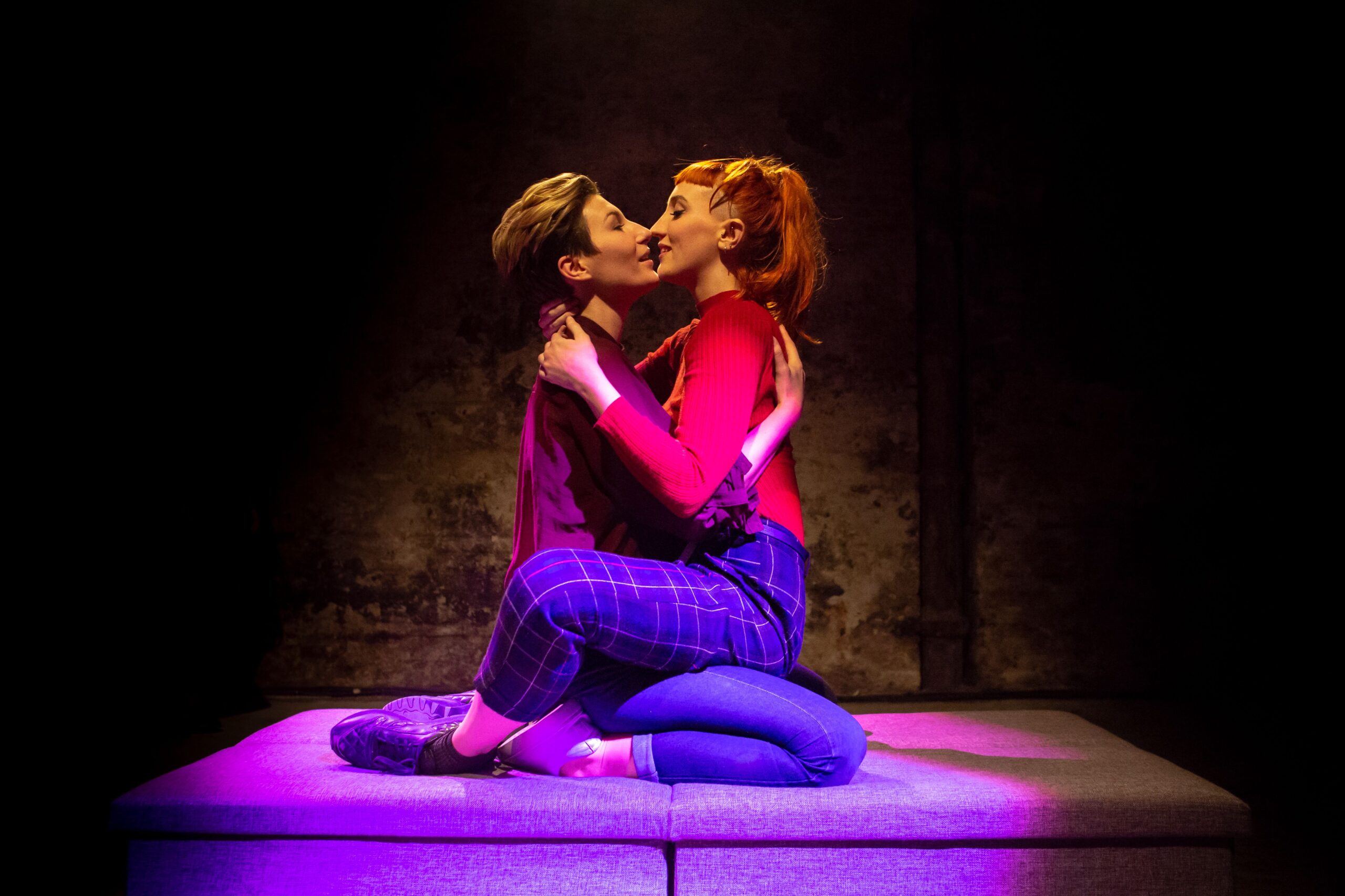 Juniper and Jules at the Soho Theatre: A Dynamic but Corny Exploration of Queer Love

When I saw the Soho Theatre was staging a piece of new writing about queer love, I jumped at the chance to attend. My expectations going in were a little guarded; I’m a keen advocate of promoting up-and-coming theatre, but the calibre of writing can differ wildly. That said, the show matched the tone of its blurb: it was fun, energetic, at moments tender, and within the burgeoning canon of queer writing, unfortunately quite clichèd.

The premise is this: Juniper is an out-and-proud lesbian, with a reputation for turning the pretty heads of bicurious women. Meanwhile, Jules has never been with a girl before. They meet at a club and fall madly in love. At the centre of the piece is the question of monogamy: Juniper, who sources comfort in order and routine, isn’t naturally drawn to the unpredictability of opening up her relationship. Jules, the more outgoing and sparky of the two, doesn’t want to limit herself. When the couple starts experimenting with non-monogamy, they are forced to confront the issues in their relationship both inside and outside the bedroom.

The performance of a play about lesbian desire at an established venue in Soho is a phenomenon belonging very much to the contemporary moment. The directorial vision of Bethany Pitts echoed the modernity of the production by making ample use of imaginative physical theatre and non-traditional staging. The audience sat on chairs on both sides of the auditorium, with Juniper (Stella Taylor) and Jules (Gabriella Schmidt) constantly changing orientation so to engage all. The only stage-piece was an oval platform, which often represented the couple’s shared bed. When physically separated and forced to communicate over text, Juniper and Jules stand at opposite ends of the stage, each facing a different part of the audience, so as to enact their distance.

Much of the play illustrates the physical interactions of the two young lovers, with copious use of sexual imagery. The effect was often comedic, but the staging was often so graphic that it verged on gratuitous. Taylor and Schmidt had great chemistry, but I do wonder if we needed to see quite so much. It felt like Pitts was making a spectacle of two women being intimate, so unabashed was the choreography. This felt like a politicised choice, inviting shock for the apparent radicality of watching lesbians have sex on stage. Although the choreography was realistic and avoided the sorts of representation aimed at the male gaze, I still found that amidst a mixed-gender audience the viewing experience was uncomfortable.

Thankfully, the play also captured the gentle affection shared by the couple, as well as the inevitable bickering and eruptions of frustration that come with the territory of living with your partner. What undermined my enjoyment of these scenes is that a lot of the dialogue was cringe-worthy. In fact, it smelled suspiciously of a middle-aged playwright attempting to invoke the cadences of dating in your twenties. Taylor dealt with the tonal woodenness of the script better than Schmidt, whose intonation was irritatingly repetitive. Nevertheless, the physical chemistry of the two actors carried the show forward, even when the writing let them down.

Beyond my issues with the script and staging, I found the central premise of ‘Juniper and Jules’ somewhat problematic. I conjecture that the play relied far too much on the theme of lesbian love for commercial success as its advertising was heavily reliant on queerness. Honestly, I’m not convinced that it really is all that new and radical for an edgy theatre in liberal London to put on a show about two white lesbians, with no apparent money concerns or class conflict. Juniper does briefly allude to past experiences of homophobic violence, at which Jules is shocked and upset. No real-life woman in a queer relationship is shocked to hear those sorts of stories. Juniper and Jules seem to have no awareness of their privilege: their main problem is whether their relationship can sustain the sexual inclusion of others, which is a terribly white and middle-class problem to have.

Perhaps to a more mainstream audience less sensitive to the emerging clichés that dominate representations of queerness, such issues would be less offensive. Perhaps, also, the play simply doesn’t aim to navigate intersectional oppressions, simply finding joy in one instance of lesbian love. To the play’s credit, it was very successful in invoking delight, even if it was at the expense of realism. Despite its reliance on tropes in need of further investigation, ‘Juniper and Jules’ was an undeniably exciting watch.

Juniper and Jules was on at the Soho Theatre from 3 May – 14 May 2022. You can visit the theatre’s website here to see what’s on next: https://sohotheatre.com