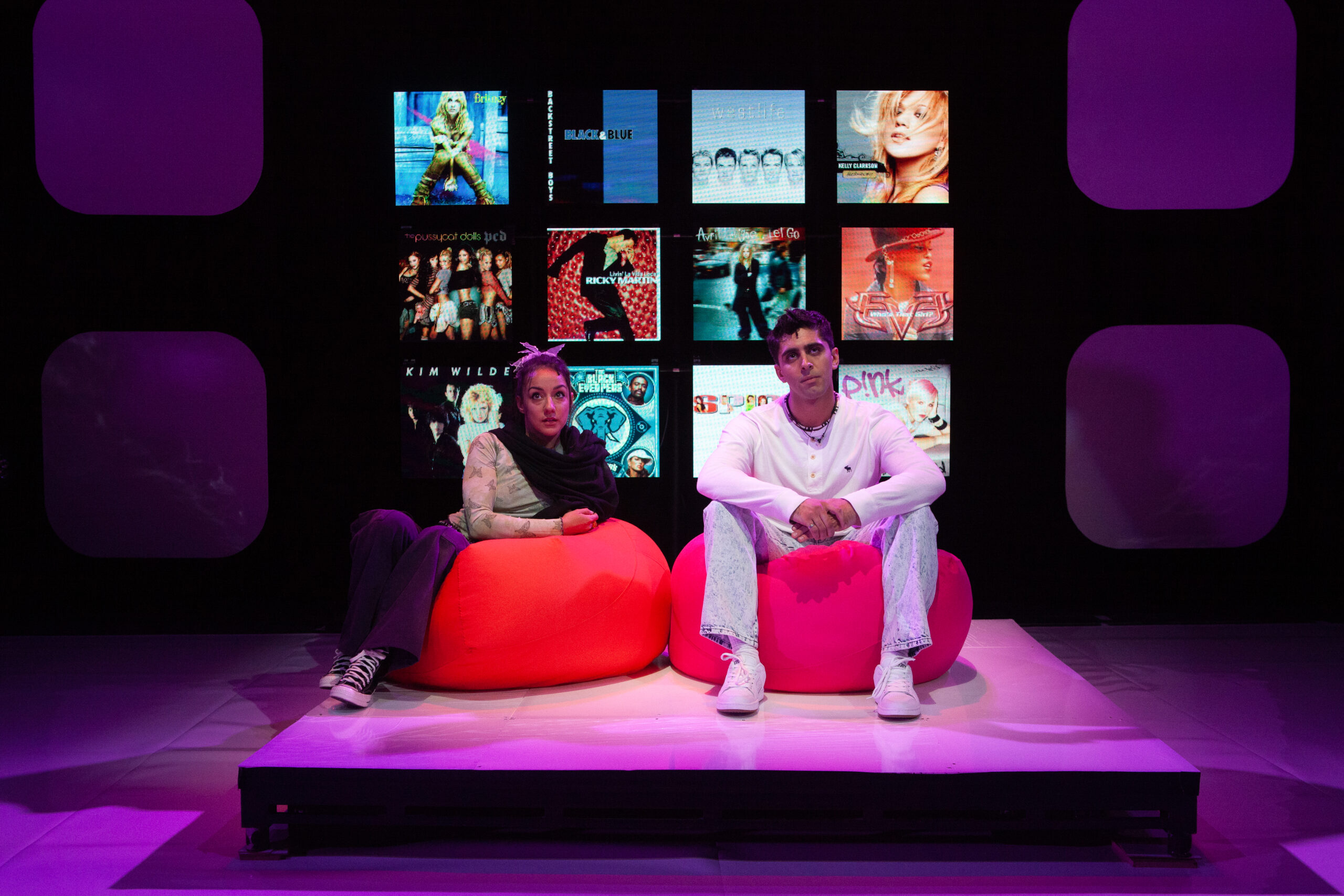 ‘Kabul Goes Pop’: A (Westernised) Glimpse into Life in Afghanistan

‘Kabul Goes Pop: Music Television Afghanistan’ is Waleed Akhtar’s debut play, currently being performed at the dapper Brixton House Theatre until 1st of June. The show dramatizes the real-life story of Farook (Arian Nik) and Samia (Shala Nix), two rebellious teens-turned-TV-presenters of Afghanistan’s first pop music show. The play is told in retrospect, with Farook and Samia performing for us their versions of the past. The first half of the show is easy-going in tone, invigorated by the naïve excitement of Farook and Samia: in the wake of the US invasion, both are obsessed by Western pop music, with Britney Spears being their firm favourite. But as power is slowly reclaimed by the Taliban and its allies, favour turns against the once-celebrated pop-acolytes. Hints that the play will come to a tragic ending are slowly littered amidst the dialogue of present-day Farook and Samia as they look back on their former lives as TV icons. We watch helpless as public adoration morphs into hatred, and eventually, the show, known as Vox, collapses entirely.

The set design captures the zeitgeist of pop music in the 2000s brilliantly: behind the actors are nine square screens, arranged in a retrograde Sudoku-style, the resolution gloriously pixelated. At times, the production team plays clips from famous music videos across the screens; at other points, flashing lights evoke the pace and glamour of the presenters’ former lives as television stars. The theatre is big, the ceilings high: Farook and Samia’s hope that they are creating a new Afghanistan feels boundless.

However, what repeatedly struck me during this first half of the play was just how Westernised it was. To some extent, I understood Akhtar’s intention to make his show accessible to a British audience, an intention clearly backed under the direction of Anna Himali Howard, but the balance didn’t sit quite right. Farook is undeniably camp in a way that is simply not tolerated in Afghanistan; meanwhile, Samia has a working-class London accent and the unlikely aesthetic of Avril Lavigne. Their infatuation with Western pop is relatable to a British audience, and indeed makes a salient political point; but we didn’t hear a single song in Dari, or learn anything about Afghan culture more generally. Aside from somewhat vague references to the Taliban that become more prevalent in the second half of the show, ‘Kabul Goes Pop’ barely even attempts to illustrate life in Kabul.

I also took issue with the branch of feminism that Samia vehemently expresses. Samia is unapologetic in her behaviour, she openly challenges men, and refuses to be told what to do. During one episode of Vox, she even unveils herself on screen; Farook and their shared manager are understandably shocked. Whilst I liked Akhtar’s emphasis on female agency in Afghanistan, this portrayal of Afghan feminism didn’t resonate with me. In fact, Samia’s uncompromising manner reminded me more of second-wave, white feminism. Lastly, I’m a tad bored of Islamophobic narratives that equate taking off your hijab to feminist emancipation, as if Islam and feminism can’t exist on the same plane.

Samia’s refusal to conform to the expectations of those in power brings her to an untimely death. In the second half of the show, Farook and Samia fall mightily out of favour; they start receiving hate-mail on their mobile phones and their families are verbally threatened. Near the show’s end, the US retract the funding that sustained Vox, leaving the show in the lurch. The manager, a fellow Afghan, is nowhere to be seen. Farook takes refuge inside the studio, but it is already too late for Samia, who is abducted and killed. These events are narrated by the present-day Samia, who we come to understand exists only in Farook’s imagination. Samia relates her death on her own terms, restoring a level of dignity to her character.

It is only in looking back that Farook begins to understand the gendered nature of oppression in Afghanistan: Samia, he says, suffered so much more than him. Whilst it’s powerful having a male character admit this onstage, I would have liked Farook to do more than simply reflect upon female oppression. In other words, I wanted to see more on Afghan masculinity, something left largely unexplored by both the text and Arian Nik’s overly camp portrayal of Farook. On this front, the show again didn’t quite capture for me the rigidity and complexity of gendered dynamics in Afghanistan. It felt dumbed-down, a little two-dimensional.

What I did enjoy about the play was the way it began with joy, hope, and fun: it’s not often that depictions of Afghanistan in the West are associated with these words. Then, we watch as Farook and Samia’s romanticisation of Western culture is slowly displaced by gritty reality. The US is neither elevated nor villainised, but it certainly doesn’t come off well. By the play’s end, Farook is an asylum seeker in Norway. He is alone and silent, unable to vocalise the question on the tip of the audience’s collective tongue: where is the mighty West, with all its apparent attempts to ‘save’ the Afghan people, now? Moreover, our knowledge of Farook’s vibrant past, in contradiction to his bleak present, illustrates that asylum seekers, too, are people: some even with illustrious histories. If a few members of the audience come out of the show moved by this realization, then it’s a job well done for Akhtar and Himali Howard.

Akhtar’s play vibrantly reimagines real-life events in a way that a British audience can understand. But it is very much a reimagination, evocative of the author’s own cultural background more than it is evocative of Kabul. I’m not convinced Afghans would sense much cultural familiarity from this play; but nevertheless, the show hopefully encourages its British audiences to rethink its assumptions about Afghanistan.