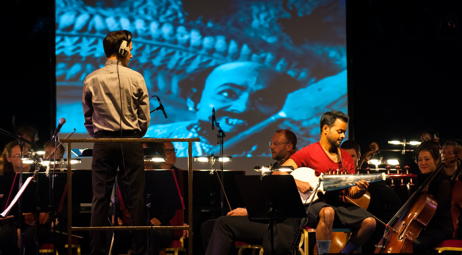 Alchemy returned to the Southbank Centre for its sixth year, playing host to a plethora of UK and South Asian music, dance, theatre, literature, fashion, design and comedy. (15th -25th May 2015)

Tipped as one of the UK’s biggest new music talents, Soumik Datta captivated the audience of the Queen Elizabeth Hall during King of Ghosts (originally commissioned and toured by the Edinburgh Mela) with the sounds of his beautifully enchanting sarod on a rainy Tuesday night. Datta’s music sang out playfully and he was joined by members of the London Philharmonic Orchestra, percussionist Cormac Byrne and conductor Johannes Berauer. Datta composed the contemporary score, with Byrne and Berauer as co-composers, in homage to one of Oscar-winner Satyajit Ray’s classic films he watched as a boy.

The score was set to the 1969 black and white Indian arthouse film ‘Goopy Gayen Bagha Bayen’, a jovial fairy tale of two musicians (Goopy who wants to sing and Bagha who plays the dhol (drum)) banished by the King from their village who cross paths in the jungle. By chance they meet King of Ghosts, who grants them three boons (a benefit bestowed in response to a request), the first boon ‘they will get food whenever they want’; the second boon: ‘they can go anywhere they want’; and the third boon: ‘they will master the art of music and everybody will be spellbound and motionless while they sing’. The two musicians go on their way and find all three boons to come true, they chance upon a music competition to be court musicians to the King of Shundi and they hypnotise anyone who hears their sound thus winning food and shelter at the palace. The Kings long lost brother declares war on Shundi and after no solution is found the musicians volunteer to resolve the conflict themselves…

Datta’s contemporary rendition to this classical Indian film, it’s music and message has much to do with the turbulent living today. In the story the two musicians go to different countries and become an emissary of peace- a message perhaps especially resonant today. Goopi and Bagha are commoners but they follow their dreams and succeed. An aspirational triumph made possible by the sheer power of music.

to create an enchanting music scape. He draws from the original score, from classical and folk Indian music and in collaboration with Johannes Berauer produces a high quality original work.

Listening to the sarod and blending sound of the tabor drum was enchanting. It transfixed the audience to Goopy and Bagha’s playful journey through time and space to eventually find happiness. Safe to say we all left the performance in high spirits and awe of the performers. Soumik Datta with his fresh approach to Indian classical music and appreciation of traditions does not need a boon from the king of ghosts!

Lauren is a music blogger, currently working in film production and talent management