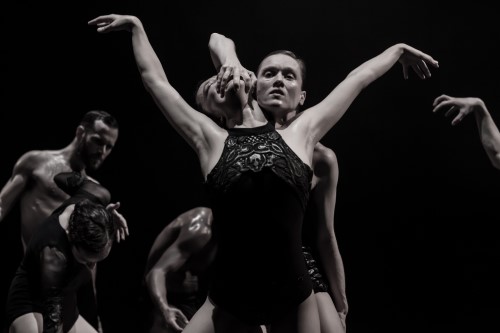 L-E-V’s OCD Love is a journey of raw human emotions presented in an intense and power-packed 55 minutes. Created by Sharon Eyal and Gai Behar and choreographed by Sharon Eyal, it is set to live music by Ori Lichtik. The narrative draws its inspiration from Neil Hilborn’s poem OCD. It provides a framework for the choreography as Eyal says “it was like a mould you can put your inspiration in, yourself in”. OCD is a heart wrenching poem, it depicts love which is reciprocated but end in disinterest and apathy. Silent endurance and external calmness conceals a mind on fire. OCD Love deals with this inner turmoil through untamed movements and powerful musical score. The music is focused and passionate and is an integral part of the show.
The narrative depicts feelings of love, passion, rejection, betrayal through the lens of obsessive compulsive disorder. Feelings run high like a leaping flame and eventually explode outwards. It’ s this magnitude and sheer force of the explosion that we see in a dance form in OCD Love.
The 6 dancers of the company are totally immersed in the piece. Their bodies speak precision and their energy perfectly fit in with Eyal’s movement vocabulary. The movements are adapted from classical aesthetics into Eyal’s own style. They build on the theme with their vigorous depiction of fierce instincts in the way they frame their emotions. There are a lot of extreme back arched movements, exposing the frame of the dancers’ torso producing an eerie and sometimes edgy and restless feeling. Some movements push the boundaries of human body. They are sometimes not pretty to look at, but certainly add another layer to the choreography, opening up new possibilities and dimensions to the narrative.
L-E-V was born out of a dream shared by its creators Sharon Eyal Gai, Behar and Ori Lichtik, as Eyal expresses at the after-show Q&A. With its tale of thwarted love and fierce passion their production OCD Love is a testament to their love of dance and creative fire within. L-E-V has provided a rare but brief glimpse into the rich dance and performing arts scene in Israel.This show is crying out for a longer run in the calendar.