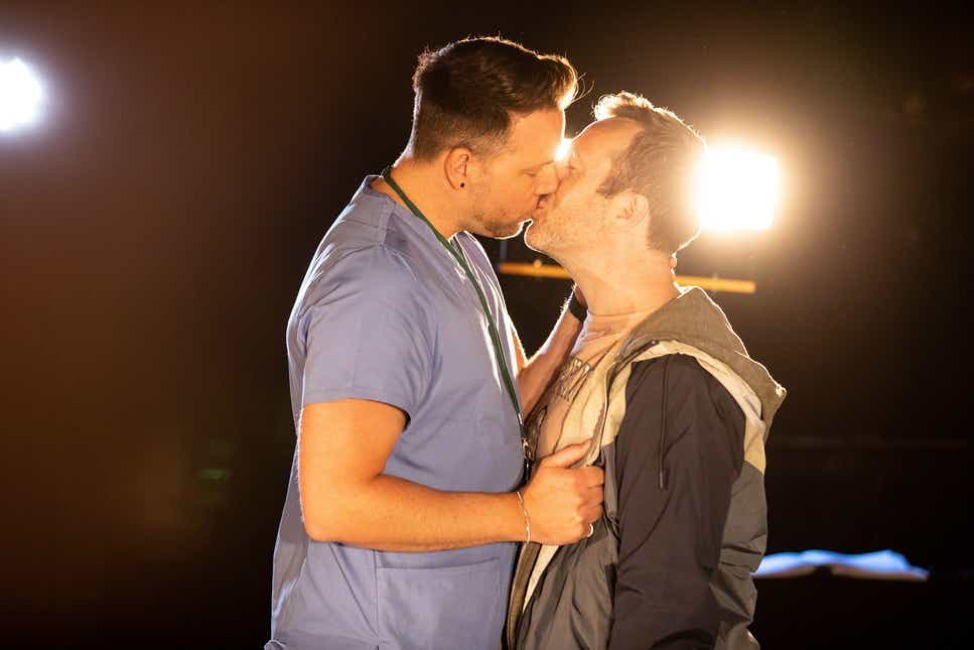 Tradition and modernity are two concepts that have always been intertwined in the arts. Many artists through the ages have struggled with their relationship with new and old, with canon and creativity. Mark Ravenhill’s reinvention of Puccini’s “La Bohème” plays with this notion by transposing a 19th Century Italian Opera piece to a much more modern stage, for the much more modern small audience of social drinkers of the King’s Head Pub. Queerness, dating apps and modernised dialogue brilliantly mix with the much more atemporal themes of tormented love, loneliness and the difficulties of young adult life.

The story starts with the introduction of the writer Robin (Daniel Koek), who is stuck writing cheap erotica while his sculptor friend Marcus (Matt Kellett) complains about not being able to sell any of his ridiculously ugly artworks. The two friends are heading to a Christmas Eve pub party, but Robin stays behind to meet his Grindr hookup “Mimi”, aka Lucas (Philip Lee). Their palpable awkwardness turns into sparkling chemistry as they duet a reprise of “Che gelida manina” (”What a cold little hand”), and Robin invites Mimi to the pub. At the party, we are introduced to Marcus’s flamboyant ex Marissa (Grace Nyandoro), and similarly to Mimi and Robin, the two ex-lovers get back together by the end of the song. But as foreshadowed by the many flashing scenes where we randomly see Mimi in a hospital surrounded by nurses, tragedy will soon strike the group of friends. The financial struggles, Marissa’s cheating, Mimi’s HIV and alcoholism and Robin’s overprotectiveness all collide in a dramatic turmoil, and yet love and relationships always come out triumphant.

If I were to define the production in a few keywords, it would be as a game of contrasts. Tragedy is paired with comedy; the epic flirts with the mundane; past mixes with present; lyricism encounters vulgarity and the grandiosity of Opera is transposed to the more intimate space of a small pub theatre. Overall, everything was married together with brio, as weird as it may be at first to hear an opera singer vocalise about how they almost “swiped left” on their Grindr match.

The set and costume design were a curious aspect of the story: the setting was a hospital ward and all the characters except Mimi were dressed as nurses, although almost none of the scenes are set in a hospital and the characters aren’t nurses. This stylistic choice was a bit confusing plot-wise, but it cleverly foreshadows the story’s tragic finale in a hospital, which the play hints at multiple times. The public starts to get the uneasy feeling that it will probably not end well for their protagonists. The central aspect of the performance, however, was the vocal prowesses of the actors. The score (David Eaton) is a simplified piano version of Puccini’s original orchestra and chorus, which creates a purer version of the harmony, leaving space for the vocal performances to shine. Philip Lee beautifully expressed the pathetic and tragedy of his character, and his singing performance incorporated all of Mimi’s vulnerability while still delivering some impressively strong notes. Grace Nyandoro’s character was truly a breath of fresh air, both due to her dynamic, more cheerful singing and the fact that she was the only female soprano. Matt Kellet was also given a more lighthearted role and delivered comedy with perfect rhythm and vocal range. Daniel Koek filled the shoes of the main character perfectly, and the fervour and technicality of his performance carried most of the emotional weight of the scenes.

Overall, the play definitely stands out from the many other representations of “La Bohème”. It manages to transpose a story that has still much to communicate to modern audiences and “dust it off” in order to make it more accessible, relatable and inclusive. Tickets are available at https://kingsheadtheatre.com/whats-on/la-bohme.