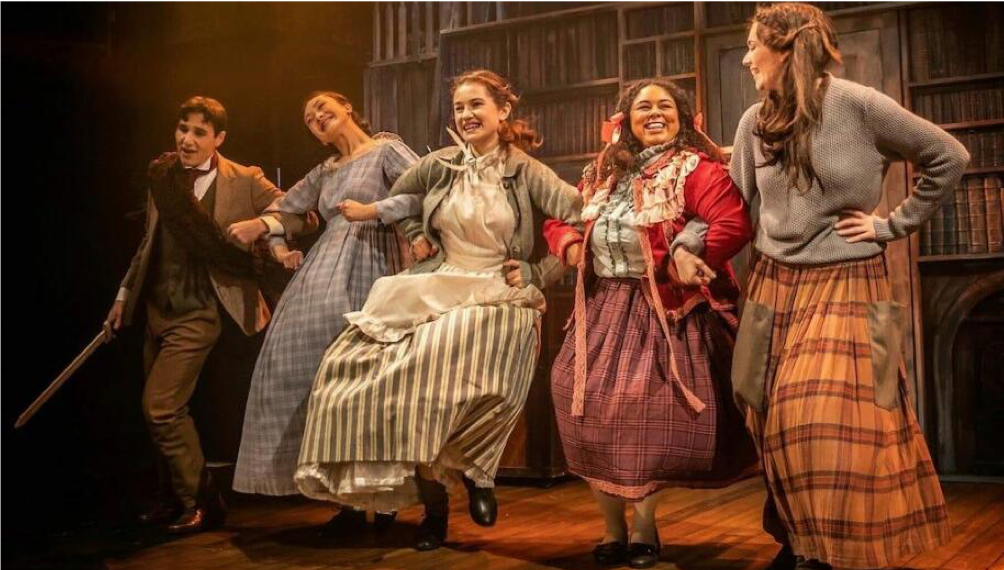 It is finally that time of year when theatre stages are being lit up by countless Christmas shows that will leave you with a warm feeling leaving the theatre. Little Women: The Musical delivers in this aspect by putting on stage the world-famous story of the four March sisters and their heartwarming adventure through early womanhood. The musical directed by Bronagh Lagan is currently showcasing at the Park Theatre, in a small and cheerful venue that will give you the impression of being welcomed in the March’s home from the moment you step inside.

Louisa May Alcott’s 1869 novel is a classic that has shaped generations of young adults with values of kindness, love, brotherhood and acceptance of one’s uniqueness. Everyone who has read the book at a younger age identified with at least one of the four sisters, as they each add a very distinct personality. Loveable but flawed, we watch how they each learn to improve as they enter adulthood. However, the play decides to tell the story from Jo’s point of view and puts the other sisters somewhat in the background, which changes the compelling dynamic of the original material. Yet this decision is beneficial for the structure of the play, which only has to concentrate on a single character rather than being scattered into many subplots for each of the sisters. Furthermore, Joe is the perfect main character for a musical, as her fierceness, eccentricity and talent for storytelling make her an extremely strong lead that carries a lot of the play. This is reinforced by Lydia White’s energy and charisma on stage.

The play starts in 1866 with Joe March (Lydia White) receiving her 22nd rejection letter from a publisher for her story, which she proceeds to read to her mentor, the German professor Bhaer (Ryan Bennett). After he tells her that her writing could be better, she hastily sends him away and starts reminiscing on her memories of her home in Massachusetts. The story jumps three years back and introduces us to the rest of the March household: Meg (Hana Ichijo), the eldest, is a beautiful, graceful and well-mannered young lady, the fittest for the society of the four sisters, who dreams of glamorous balls and meeting her soulmate. Beth (Anastasia Martin) is a quiet, kind and loving girl who loves to play the piano. Amy (Mary Moore) is the youngest child of the family, whose short temper, mannerisms and desire to be at the centre of attention always get in trouble. The matriarch of the household, “Marmee” (Savannah Stevenson), is a loving and wise mother who struggles to deal with the family’s impoverishment and her husband’s absence serving in the American Civil War. We follow the progressive evolution of the girls as they grow older, go to a ball, start meeting suitors and become lifelong friends with their neighbour Laurie (Sev Keoshgerian). These memories, as well as the tragic events to come when Jo is required to go back home, will help her write, in addition to a better story, a new novel titled “Little Women”.

Despite a few time jumps and some plot points being left out, the story is put on stage with great fidelity to the source material. The casting couldn’t have been better, as the four sisters look like they just came out of the pages of the book. Furthermore, the acting and singing performances all deliver, which is essential when it comes to a character-driven story such as this one. The live music composed by Jason Howland and Mindi Dickstein as well as the musical performances of the actors were pleasant and often very energetic without ever being excessively spectacular, always receiving enthusiastic applause from the audience. The set and costume design (Nik Corall) faithfully reflected the ambiance that one would feel whilst reading the book, and the changes of setting and costumes were very creatively done.

Overall, one of the major points of the story is the theme of storytelling: Joe narrates the story to the audience. She struggles writing stories throughout and the conclusion of the play is the writing of her new novel. The fact that we are watching a play based on a book also contributes to the storytelling aspect of the play. The most original parts of the play were the moments where Joe would tell her stories “of blood and guts”, where her characters would appear behind her, mirror her movements and repeat her same lines, as if they were a projection of her that she had complete control of. In the end, her relationship with her sisters is what helps her surpass her writer’s block, serving as a final moral of love and sisterhood to the story.

This cheerful musical tale is a must-see during the holidays that will probably encounter the success it deserves with this first London-based show. It will run weekly until December 19 at Park Theatre. Get your tickets at https://www.parktheatre.co.uk/whats-on/little-women-the-musical.