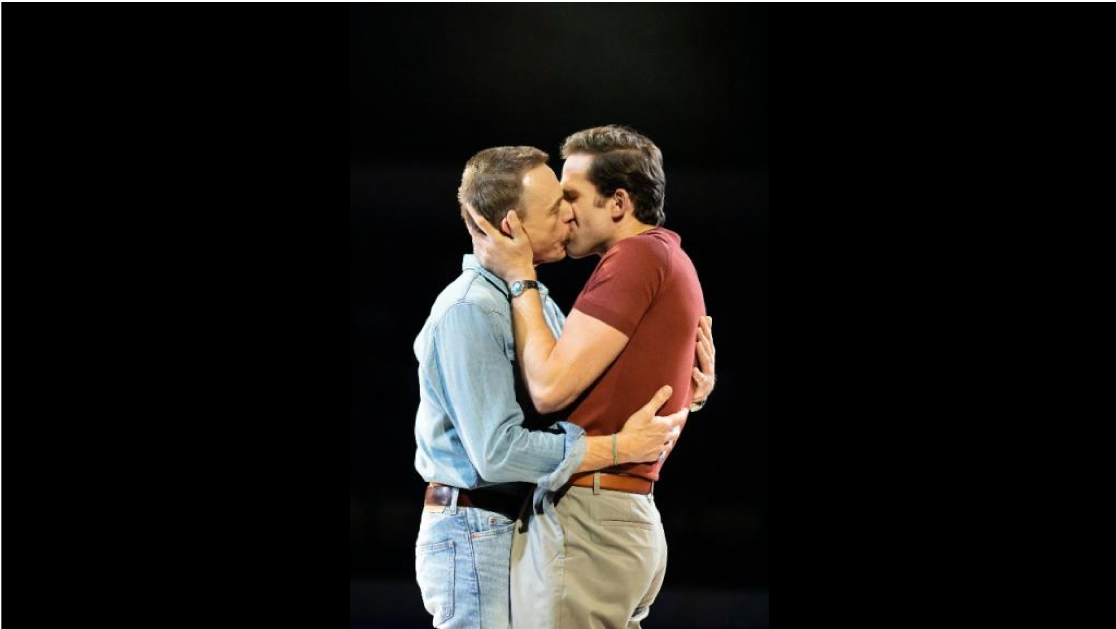 Love & activism at The National Theatre – ‘The Normal heart’

This fall, the National Theatre is hosting the revival of Larry Kramer’s famous gay-activist play ‘The Normal heart’. Written as a pure cry of rage in 1985 during the AIDS crisis, the play embodies the fear, anger, and uncertainty of the gay communities of New York that saw themselves targeted by a terrifying unknown virus, whilst being ignored by the media and the general public. This politically charged story of how writer and activist Ned Weeks (Ben Daniels) tries to raise awareness on the mysterious virus transforms into a heart-wrecking personal drama when his lover, Felix Turner (Dino Fetscher), catches the illness.

The story is punctuated by an intense sense of urgency, as the constant reminders of Doctor Emma Brookner (Liz Carr) keep us updated on the number of deaths throughout the timeline of the play, giving an almost apocalyptical aspect to the situation. Ned’s exasperated outbursts also add to the imperativeness of his cause, and the play is punctuated by his long and passionate tirades. The furious hot-headedness of the protagonist can be perceived as an annoying trait that doesn’t profit the plot or bring much debate to the table, as any attempt at a two-sided conversation with any other character is impossible. The personal drama that Ned goes through as well as the intimacy that he shares with his boyfriend resonated far better with the audience than most of the yelling, and in many instances, in the silence following the end of a scene, one could hear many echoes of muffled sobs throughout the room.

The long-awaited revival of the play could not have come at a better time, as the theme of the fear of an unknown virus touches some unpleasant familiar cords. Although being extremely loyal to the original script, the modern adaptation contains some changes from the original. It makes the interesting choice of not dimming the lights once a scene is over so that we get to see the actors break character and run around once their scene is done, as well as setting the date and location of each scene by making the actors announce them out loud before they start saying their lines. This modern version is also an admirable example of good representation as it possesses a very diverse cast, such as actual queer and disabled actors, who sadly are still underrepresented today when it comes to performative arts.

The play starts with the characters lighting a small flame that will burn throughout the whole play, echoing W.H. Auden’s poem “September 1, 1939” about World War II, where it is claimed that one must “show an affirming flame” during a disaster. The whole play is animated by this spirit of fighting, of seeking justice, of yelling at every corner until we are heard. It doesn’t dwell on self-pity, it doesn’t ask for our sorrow. It wants to fight.

Humour, drama, and politics will move you to the tears in a play that is, without a doubt, a must-watch. Not only does it cast a light on a part of history that is often overlooked, but it also is a story full of humanity and love that will bring together audiences of any background. To once again quote W.H. Auden, “We must either love each other, or we must die”.

The tickets are available until November 6.
https://www.nationaltheatre.org.uk/shows/the-normal-heart.