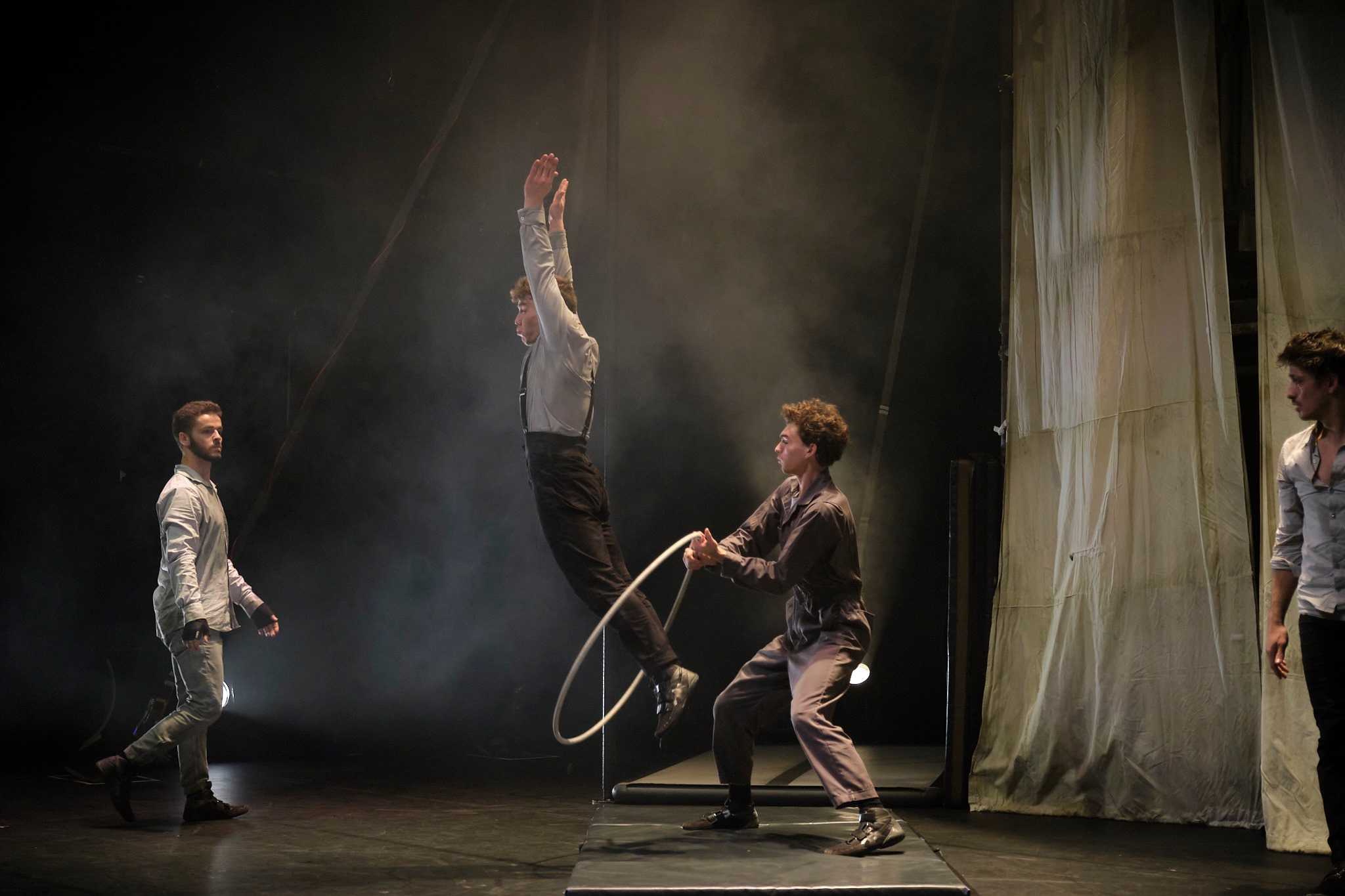 According to Google Translate, ‘Machine de Cirque’ – the title of both the performance and the Canadian circus company – means ‘Circus Machine’ in French. Consciously or otherwise, it probes the extent to which a circus is mechanised. Circus performance is traditionally centred on carnivalistic material: the outlandish, the ‘exotic’ (as problematic as this terminology is), and the incredulous. Take, for examples of the exotic and the outlandish, a ‘freakshow’ or a clown, who make the audience laugh unintentionally (for the latter this is a façade, but for the former it tragically is not). For the incredulous, trapeze artists, fire breathers, axe throwers, etc. Ultimately, all this carnivalism is based on human, or at least biological, spectacles. Yet at the same time it is so mechanical, and exact almost to the point of clockwork: performers must catch each other and dodge knives with meticulous precision. Each member is its own tiny moving part.

Machine de Cirque lives up to the name, and the show is simultaneously an exploration of mechanics in circus and of the synapse between the organic and the mechanical. The six-man troupe perform on a stage full of typical circus props: a bike, a climbing frame, wires, hoops et al. Sundered from their typical residence, however, and in a proscenium setting, rather than in the round, these props take on the character of objets trouvés.  The backdrop otherwise is stripped back and, for lack of a better term, dystopian – dark, metallic, and decrepit. The music, played by one of the troupe on a drum kit, a synth, and a few other instruments, is super trip hop: the designated genre for post-apocalyptic soundtrack.

The most impressive aspect of the show is the promethean quality of the performers: they were all adept in mime, acrobatics, clowning, and bodily humour. And despite the intense circusness of it all, it was attractive to buy into this spartan world of play. The scenarios were largely funny too – as one man took photographs of himself, new men emerged who had enlarged Polaroids of his face for heads. In another, a man took an audience member on a mimed date, and when she went to lie on his bed (mimed by another performer) after a night on the town, it turned out it was actually his motorbike – how presumptuous of her. In another favourite, the entire company stripped and performed using towels which repeatedly threatened to expose their modesty.

On the Sadler’s Wells website, it states that ‘six guys find themselves living in a post-apocalyptic world. They are alone and embark on a quest to find other survivors with the help of a strange machine. Will they succeed?’ It wasn’t until after I had seen it that I realised there was even supposed to be a plot. Indeed, the ghost of Samuel Beckett, with his aberrant ruin-dwellers, haunts Machine de Cirque, so I assumed that plot would give way to performance. Furthermore, aside from the truly excelling physical feats, such as the seesaw backflips, the segments which leaned on the wow factor did not measure up to the ingenuity of the skits. The characters were vague enough that I knew nothing about them, yet developed enough that I somehow appreciated each for his personality and his quirks.

Machine de Cirque is an enjoyable and truly impressive 90 minutes, for both adults and children. But the company should think about whether committing to a narrative is really worth it – if the scenarios were clearly linked by narrative, the story could have been really convincing. But at this quarter-baked stage, the suggestion that there is a story is slightly laughable. Luckily, most of the performance itself was extremely laughable.

For more info and other productions showing at Sadler’s Wells’ Peacock Theatre –www.sadlerswells.com