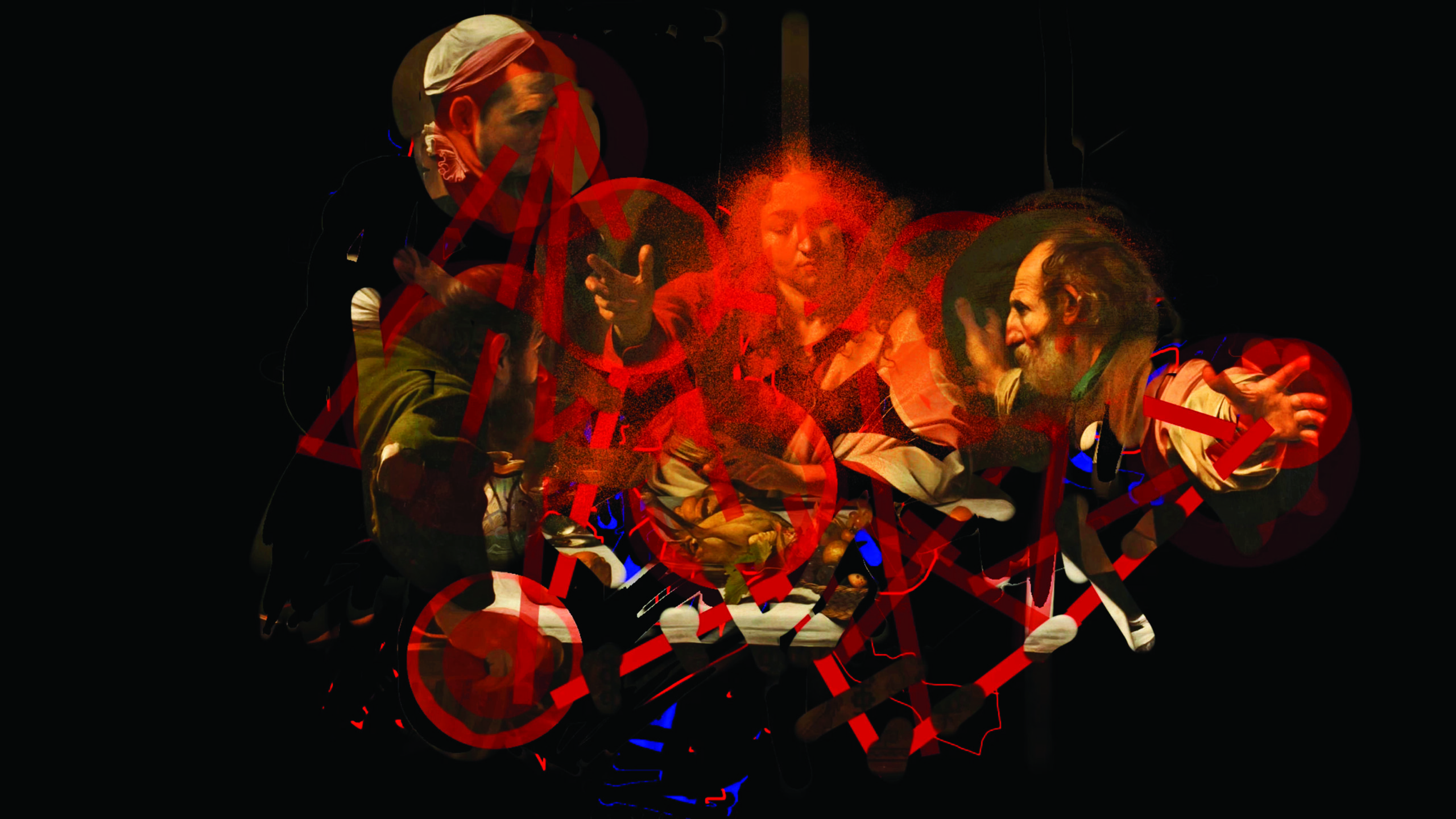 So, when I heard that the National Gallery was not only encouraging but actively commissioning Nalini Malani to enter in a creative dialogue with its revered collections, I was impressed by a gallery I had perhaps too staunchly dismissed as old-fashioned. I eagerly travelled up to the Holburne in Bath to see ‘My Reality is Different’, wondering how different Malani’s newest piece would indeed be to the Holburne’s permanent collection. I knew from the Holburne’s website that the installation featured high-res images of famous European paintings as well as Malani’s own digital animations, fusing the recognisable with the brand-new. I was excited to see what came of such a provocative synthesis.

Walking into the installation space, I was immediately taken aback by the uncompromising pace and tone of what I witnessed. Projections of Caravaggio’s most iconic works are displaced by flashing illustrations of black and brown women; blood-red streaks and prison-esque bars of green shoot across the walls. Familiar portraits of Renaissance masculinity are overlaid by anonymous, weeping bodies.

From the invisible speakers around us comes the voice of a modern-day Cassandra, prophesizing the fall of Troy. In Greek mythology, Cassandra’s burden is that no one will heed her warnings. What is Malani insinuating?

There are multiple layers to the installation Malani has created: the images of Renaissance art, Malani’s digitised animations, quotes that pop up and disappear, abstract flashes of colour. None of these layers are synced with one another, creating an endless cycle of variations and meanings to infer. Some In the audience expressed bewilderment at this frenzied pace of the projections. They were right to find it overwhelming, and potentially even distressing.

However, to me, the incomprehensibility of the whole piece was somehow fitting. Malani has taken a bunch of highly canonical works and projects onto them her own representations of the people silenced by that canon: women, people of colour, survivors of violence. In conversation later, Malani spoke of the ‘subaltern’ as the central figure that ‘My Reality is Different’ tries to locate. It made sense to me that the viewer sees no more than flashes of these unknown and unknowable figures, those whose labour surely enabled the creation of canonized masterpieces and whose stories have been willfully forgotten. Try as she might, Malani can’t tell us with the concision of verbal language which colonial structures financed their production, nor the real-life people whose beauty was consistently dismissed by colonial-European standards of beauty. There is no record of those individuals for us to excavate. Instead, Malani’s illustrations provide imaginative glimpses into what those forgotten stories might include, glimpses that invite the audience to continue that process of imagination.

Some viewers expressed discontent that Malani had taken the bold risk to project onto various Renaissance masterpieces her own avid expressions. For me, though, Malani’s palimpsest gestures not only towards the political economy from which those paintings came, but also the multiplicity of contemporary interpretation. Malani’s reality is different, she tells us; and this installation illustrates what it might be to look at 17th century European oil painting through the eyes of a 21st century radical female artist of colour. Someone else will see those same canvases with an altogether different perspective; and each interpretation constitutes a new layer of meaning, akin to the process of adding layer of installation upon installation.

We are no longer in a world where the only interpretation that matters is a white, male one, Malani seems to say. For me, Malani’s approach actually manages to bring Renaissance art to life, something I can’t say of traditional presentations of that particular artistic era. Far from desecrating long-worshipped frames, Malani reclaims them for herself, paving the way for future generations to do the same.

Sophia is a writer interested in migration, cultural citizenship, displacement and queerness with a focus on Central Asia and Northern India. Sophia is inspired by talking to the people whose stories are sidetracked by sensationalist headlines, and as such aspires to share those counter-narratives through political journalism.

New video animations featuring famous paintings in the National Gallery and the Holburne Museum, Bath, have been created by Nalini Malani.

With a fierce commitment to pushing boundaries and experimenting and exploring the possibilities of the moving image, Nalini Malani has created a deep black exhibition space in the Holburne Museum, Bath, with one monumental artwork, My Reality is Different.

Encompassing over 40 meters of wall, the 25 striking new animations immerse the viewer in a panorama of nine large video projections, played in a continuous loop. These animations are based on an idiosyncratic selection by Malani from famous paintings in the National Gallery and the Holburne Museum.

The National Gallery Modern and Contemporary Programme is supported by Hiscox

For more information and tickets-Nalini Malani: My Reality is Different – The Holburne Museum National Gallery Contemporary Fellowship with Art Fund

£11 (£12.50 with Gift Aid) admission for the permanent collection and all temporary exhibitions, 18 and under FREE.