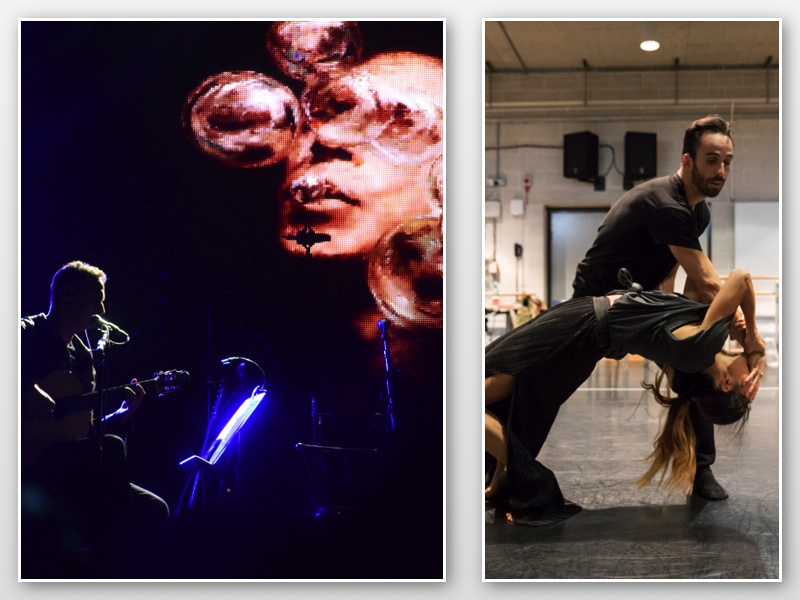 Unique among music makers of his stature Nitin Sawhney brings his trademark charming interactive style to his live performances. He effortlessly engages the audience with a witty remark here a short anecdote there. Its almost like he is entertaining a small group of friends in his living room but the venue in question is the Royal Albert Hall and the music a path breaking cross over between Indian classical roots and western notes. A super talented group of instrumentalists and vocalists teamed with hip-hop duo Sebastian Ramirez and Honji Wang produces the kind of magic that Sawhney is known for.
The dance numbers choreographed and performed by internationally acclaimed Ramirez and Wang are stunning and immersive. They draw the audience in by sheer force of their movement perfectly blending in with the music. The duo is locked in a unique choreographic synchronisation through their style of hip hop, contemporary and acrobatic- when one is agile and mighty the other is responsive and receptive producing astonishing moments of contact choreography. Shifting force and lending texture to each others movements they create fierce and captivating moments in their dance pieces giving a dramatic edge to the show.
The evening’s presentation sets off with the captivating ‘Days are Gone’ by Eva Stone. This is followed by ‘Sunset’, an all time hit from Sawhney’s repertoire. Sung by lead vocalists J’Danah and Reema Bharadwaj it creates a tranquil mood. From here the evening keeps flitting between jazzy numbers and Indian classical vocals.
Sawhney a multi instrumentalist is equally at ease with the guitar and keyboard. As a composer he has produced an array of breathtaking music across a diverse repertoire. He has skillfully dissolved cultural boundaries through his music which has brought together sounds from across the globe.
‘Dystopian dream’ – his latest album is the output of his trailblazing musical journey across genres and styles. The programme showcased numbers from this album. ‘Time trap’ by lead instrumentalist Manu Delago accompanied by backing vocals from Eva Stone and Reema Bhardwaj is a beautifully woven piece with western and Indian elements. ‘Redlift’ by J’ Danah is a surreal piece sung from the depths of a soulfully etched voice. This set against ‘Tere Khayal’ by Reema Bharadwaj and Ashwin Srinivas is carved out of the Indian classical rhythms and compliments Sawhney’s trademark style of unifying traditional with the contemporary and the east with the west. Though the album is named ‘Dystopian dream’, ironically it produces the opposite-an euphonious harmony of sounds from multiple cultures.
Sahwney has put together a superb ensemble of gifted musicians. Aswin Srinivasan’s flute adds a layer of softness with a hint of nostalgia and longing. Soumik Datta plays beautiful music with his sarod and befittingly for this show plays his traditional Indian instrument standing up like a guitar player. And he carries it off with his music. Aref Durvesh on the tabla is phenomenal. Again like Soumik he does not adopt the posture of traditional tabla players throughout. Rather, in keeping with the relaxed style of Mr Sawhney he delivers a virtuoso performance standing up playing the tabla sometimes like a drum on a raised table.
Mr Sawhney seduces the audience with his casual conversational style and his music which moves effortlessly between haunting jazz and soul, Indian classical vocals, energetic tabla beats and mellifluous sarod and flute sounds. Its the sort of musical evening that leaves you yearning for an encore.
Protima Chatterjee