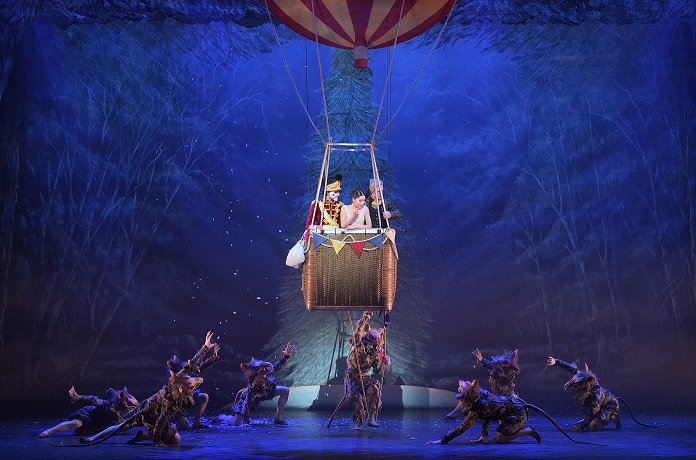 The English National Ballet’s production of Nutcracker is one of its pièce de résistance presented as a festive tradition since the 1950s. After its sold-out performances over the last two years, ENB’s Nutcracker created in 2010 is back this year at the London Coliseum, a perfect Christmas treat for the entire family.

Tchaikovsky’s haunting score always provides the best reason to view any Nutcracker production. Rina Kanehara’s captivating performance as Clara on the opening night along with a huge cast of over 100 dancers and musicians from the ENB philharmonic is awe- inspiring in this magnificient production, once again, this year.

The performance starts with an incredibly excited Clara and Freddie getting ready for the Christmas party along with their family. Outside people are ice skating in the frozen Thames. A warm and welcoming festive ambience is set up on stage amidst the snowy scene of a cold wintery December afternoon, both on stage and outside the auditorium.

The following Party sequence introduces the characters in the story and the ‘Nutcracker’, when gifts are exchanged. The dances of the puppet theatre lighten the atmosphere, providing the perfect party entertainment. It transports one to a traditional festive celebration in the last century. Dr. Drosselmeyer, the guest with the mysterious character, presents Clara with the nutcracker doll, and sets off the story to unfold.

In the quiet night ensues a battle between Clara’s Nutcracker and the Mouse King. A beautifully choreographed dream sequence of an organised chaos that is fun to look at, with dramatic victory and defeat danced to perfection.

The living room magically transforms into a winter wonderland, and Clara’s adventures begin. The nutcracker turns into Dr Drosselmeyer’s nephew. Clara and the nephew (Jeffrey Cirio) present an exquisite ‘pas de deux’ in the snow. This beautiful moment is not to last, however, as the Mouse King appears and pursues Clara in the snow. With the story tantalisingly poised at this point the show breaks for interval.

The second half begins with the dramatic balloon flight with Clara, Dr Drosselmeyer and his nephew, with the Mouse King, desperately trying to cling onto the side. A perfect treat for the young audience who look up in awe and wonder, following the balloon across with abated breath. From here the performance rises in grandeur with the introduction of the dancers from around the world. Short punchy pieces pick up the spirit. They are presented with perfect technique, rich characteristic choreography, wrapped in a colourful blanket of regional authenticity.

Clara’s elegant and astonishingly detailed pas de deux as the Sugar Plum Fairy, with the nephew as the Prince, is one of the major highlights of the production. The Sugar Plum fairy’s glistening costume with 400 Swarovski elements sewn in it is a visual treat, especially when her performance blends into the adorable dance of the snowflakes performed at an impressive scale – Altogether It’s a white wonder!

Wayne Eagling’s choreography is applauded from start to finish. Peter Farmer’s set design and David Richardson’s Lighting are inventive and draws a subtle distinction between the dream narrative and real life. The party scenes happen behind a mesh screen while the dream sequences come out in the front as if questioning the arbitrary dividing line between dream and real life.

The performance ends on a rather serene and happy note- Young Clara waking up in her bedroom and running outside with her brother to say goodbye to Dr Drosselmeyer and his nephew, walking away in the snow. After journeying with Clara in her dream on a floating balloon the audience is thus safely landed on a festive Christmas evening in the real world. A thoroughly enjoyable family entertainment and aspirational for the many young dancers in the audience.