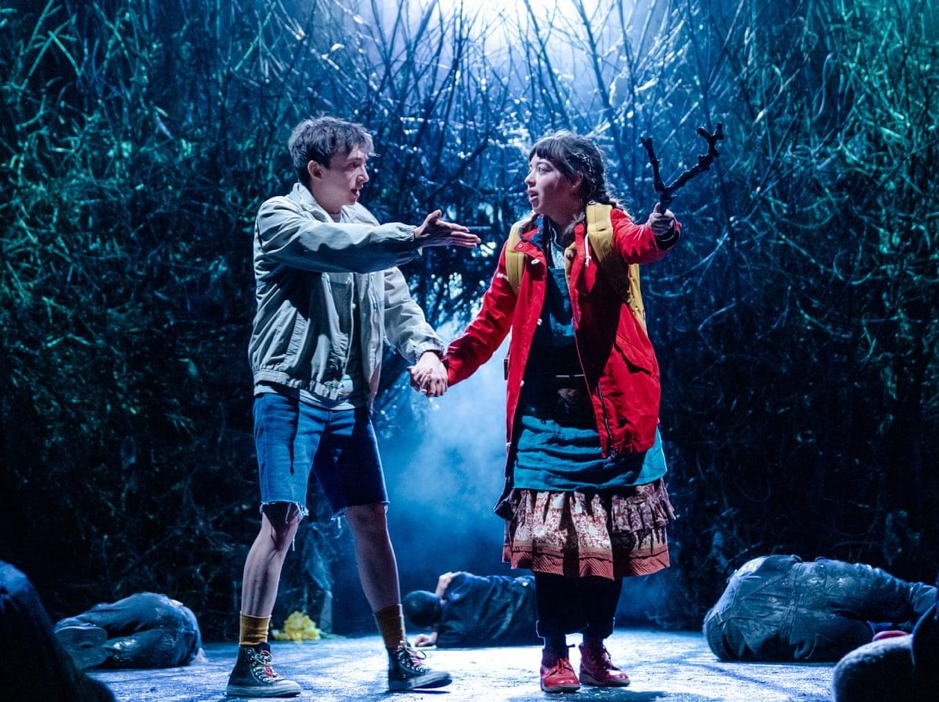 From the very second of entering the auditorium the majestic atmosphere was felt throughout. ‘Ocean at the End of the Lane’ is presented through the set design of glistening lit up trees that frame the stage and make it appear as if we have stepped into a fantasy world. Originally a novel written by Neil Gaiman ‘Ocean at the End of the Lane’, adapted to a play by Joel Horwood and directed by Katy Rudd, is a fantasy tale that transports us into an entrancing magical world. It blends the realism of family relationships and their struggles with the fantastical images of nightmarish shapeshifting monsters. The play reminds me of a blend of both Narnia, which is referenced by the unnamed main character, played by James Bamford, as well as Netflix TV show Stranger Things, which both have boisterous energy and the premise of young teens on the pursuit to eradicate a terrifying monstrous villain.

Years after the events that occur during the major part of the play, the unknown main character is now an adult and he visits the spot in which he met his first love and best friend, Lettie. As he is perched upon a bench Lettie’s grandmother appears. As they talk, he reminisces about the events that occurred all those years ago, and we are transported to the past where he is now a young boy. The main story of the play begins in tragedy, a lodger who had been living with the protagonist and his family is found dead and it is ruled a suicide. In distress the protagonist’s father attempts to get his son away from the tragedy telling him to go home when a local young girl, Lettie, appears. The protagonist waits at Lettie’s home whilst his father speaks to the police. As he waits for his father the pair begin to get to know each other. The protagonist enters the fantastical world of Lettie and her family. They are quite mysterious and ambiguous, with a grandmother who has been alive ‘since before the moon was made’ and a mother who knows strange magical tricks. Lettie is far from normal too, also possessing these strange magical qualities as well as being obsessed with a pond which she insists is an ocean and telling the protagonist about a creature called ‘the flea’ that has entered the universe through a portal created because of the lodgers’ death. We soon find out that this flea is a grossly misleading name for a terrifying shapeshifting creature.

The chemistry between the protagonist and Lettie is wonderful and charming. Lettie acts as a confidant for the protagonist, helping him when he gets himself into difficult situations. The protagonist acts as a comfort for Lettie, being her first and only friend. These scenes that interact with one another are some of the best scenes throughout the play. Some of my other favourite scenes within the play arrive in the interactions between the protagonist and his family. The family dynamic is endearing and entertaining to watch, a goofy father who burns his toast every morning without fail and a loud bratty sister who is perhaps the funniest character in my opinion. However, when his father meets ‘the flea’ who has shapeshifted into a beautiful lady who calls herself Ursula, the protagonist becomes ostracised from his family and his relationship with his father suffers. As his father becomes infatuated with Ursula, he becomes frustrated and infuriated with his son’s disapproval of her, resulting in one of the hardest scenes to watch in the play.

Everything about the play’s set design, props and even the set changes are elegant and aesthetically pleasing. The scene in which the protagonist and Lettie encounter the flea for the first time is insanely engrossing as Lettie moves elegantly conducting magic to defeat the creature, which is large and hauntingly gorgeous, and moves almost in synchronisation with Lettie. The set changes are creative and rather than being awkward intervals of change they are graceful and make the play all the more beautiful.